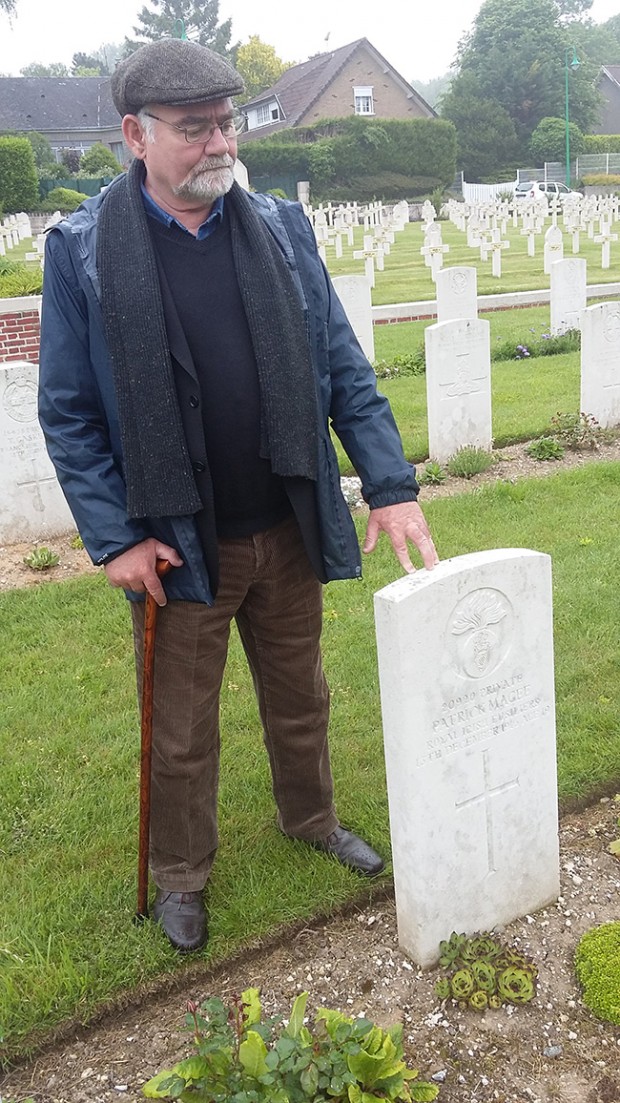 • Pat's great uncle Patrick died on active service with the Royal Irish Fusiliers on 13 December 1916 and is buried in the British War Cemetery at Saint Pol-sur-Ternoise, France

I respect, and even honour, the integrity of those who fought, killed and died, from wherever – I profoundly abhor the warmongering and imperialism that occasioned the slaughter

OLD RIVAL VERITIES of Orange and Green, of the struggle against colonialism and that between empires, have been subject to fresh scrutiny in the run-up to and during this Decade of Centenaries – of the Easter Rising, of the Somme, of partition.

A wealth of research, from the political, cultural and academic spheres has come to enlighten – and to challenge – our narratives. Voices from the past are clearer. This reappraisal is welcome and necessary if we are to better understand ourselves and each other.

For me, as I am sure for many, the focus is personal, for there is much in our own family accounts to audit and many gaps to appreciate.

In that frame of mind, in May I visited the grave of my great uncle, Patrick Magee, in the British War Cemetery at Saint Pol-sur-Ternoise, France. I am named after him. Patrick died on active service, a private in the Royal Irish Fusiliers, on 13 December 1916. He was 19. The location and date suggest that he fought at Ginchy with the 16th Irish Division.

Standing by his grave marker, poignant in its simple uniformity to the many thousands of others lined to the horizon in similar cemeteries throughout Flanders, a boom of thunder in the distance brought to mind how the massed artillery bombardments on the Western Front could be heard in England. Something of the truly horrific scale of the carnage, from and on all sides, chilled this impressively tended, peaceful setting.

I could not help reflecting, ‘Why?’ Why was Patrick buried here, so far from the backstreets of Belfast? The 1911 Census attests that, at the age of 13, he was a millworker living at home in Plevna Street. Had poverty drawn him to enlist, as thousands did; or had he answered the duped and duping politicians’ calls to arms to defend small nations in exchange for Britain to implement Home Rule, deferred to the end of the war?

I respect, and even honour, the integrity of those who fought, killed and died, from wherever. I profoundly abhor the warmongering and imperialism that occasioned the slaughter.

Patrick’s younger brother, Joss, my grandfather, enlisted the following year in the Royal Irish Rifles and also served in France. Was his decision to fight more visceral? Driven to revenge his older brother? But perhaps his intention predated news of Patrick’s death. I can only imagine, for none of this was ever spoken of during those regrettably few times we met during my childhood. Without answers, I feel haunted by the speculation.

After the Armistice, awaiting demobilisation, Joss obtained a reference from his commanding officer, who wrote that he was “a man in whom any employer will confidently place his trust”. Rather than act on this solid endorsement, Joss instead chose transfer to the Connaught Rangers and in 1920 took some role in that regiment’s mutiny in India in protest at Black and Tan atrocities back home. His role was entrenched as family history . . . or rather mythology, for I grew up thinking he had personally scaled the garrison flagpole to hoist the Tricolour.

Whatever part he played, he was briefly detained and dishonourably discharged with forfeiture of his service medals. On return to Ireland, Joss volunteered in the anti-Treaty Irish Republican Army and was subsequently interned on the Argenta prison ship, moored in Belfast Lough. 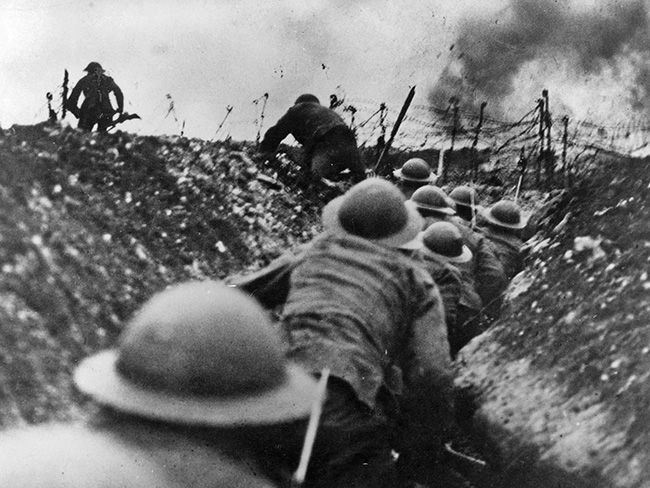 • Horrific carnage awaited the men on the Western Front

His internment order is revealing. In counterpoint to his CO’s praise, he is therein “considered by the local police to be one of the worst characters in the city and a menace to the peace while at large”. These written testimonies are discordant: approval at 18, a “worst character” at 21. To my thinking, he was honourable in both contexts but was being judged through the harsh prism of imperialism.

My grandfather remained tight-lipped about his republican involvement, common to that generation, as he was about his days in khaki. I am piecing together a jigsaw that extends from the fields of France to the Argenta; from partition to the H- Blocks of Long Kesh. This is a legacy.

While an internee, Joss married my grandmother, Susan, heavily pregnant, whose own brother, Charles Steenson, had died in Flanders in 1915. Joss’s internment record reveals in bureaucratic dispassion how a launch took him from the prison hulk to Larne Workhouse, part of the onshore internment fabric where, I imagine, a basic ceremony took place. Hours later, another launch returned him to his prison bunk. A son was stillborn a month later. He would have been christened Patrick. A few years later, my father was born. Joss named his surviving son John. ‘Patrick’ skipped a generation to me.

I accept that there is validity on all sides; that people with whom we fundamentally disagree may act in good faith and intent. Certainties seem to darken and distort our crying need to reconcile.

Those in positions of power, whose narratives are buoyed on that power as much as perspective, surely bear the greater responsibility? But the power imbalance underlying our differing worldviews should never bar us from contact and dialogue. We need openness, mutual respect, consideration, honesty, equality.

Pat Magee is a republican former political prisoner convicted of the Grand Hotel bombing in Brighton in 1984 which almost killed Prime Minister Margaret Thatcher and the entire British Cabinet. He is the author of Gangsters or Guerrillas? Representations of Irish Republicans in Troubles Fiction which is based on his doctoral thesis. Pat is committed to sharing his personal experiences to assist reconciliation.