Collusion in the DNA of the RUC and British Army 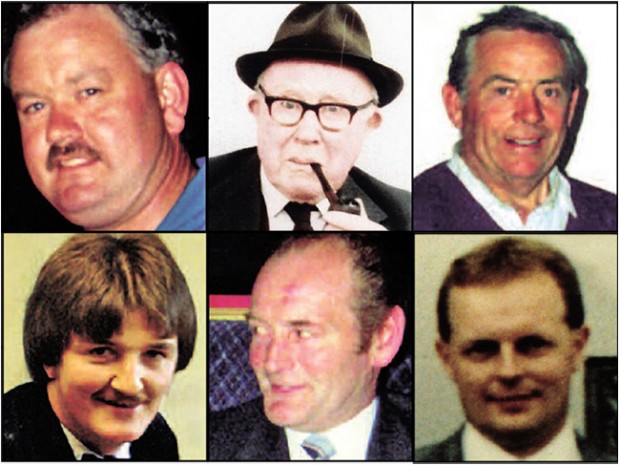 THE RELEASE of the second report by the North’s Police Ombudsman into the 1994 killings of six nationalist men in the Heights Bar, Loughinisland, County Down, as they watched a soccer World Cup match between Ireland and Italy has forced many aspects of collusion into the public arena.

For the British Establishment and its unionist allies, the Loughinisland Massacre report by Dr Michael Maguire released on Thursday 9 June has presented them with a great deal of uncomfortable evidence about collusion between the crown forces, especially the RUC, and loyalist death squads in this and other attacks. They are reacting with predictable outrage.

The unionist argument, articulated by North Antrim MLA and Traditional Unionist Voice leader Jim Allister, is that such investigations by the Police Ombudsman or other agencies amounts to “rewriting the terrorist narrative”.

Allister, beating his well-worn drum, also asks where is the report on “SF-IRA collusion”.

The unionist and British narrative, of course, is to exonerate the actions of Britain’s military, police and intelligence forces during the conflict and justify their actions.

Chief among those calling for a “rebalancing” of the “sweeping meaning of collusion” is Ben Lowry, Deputy Editor of the North’s unionist daily, the News Letter.

Writing on Saturday 11 June, Lowry attempts to discredit the Ombudsman’s report, especially over his use of Justice Smithwick’s definition of collusion (a definition, incidentally, accepted by the PSNI).

“Many of the individual issues I have identified in this report, including the protection of informants through wilful acts and the passive turning a blind eye; fundamental failures in the initial police investigation and the destruction of police records, are in themselves evidence of collusion as defined by Justice Smithwick

“When viewed collectively, I have no hesitation in saying collusion was a significant feature of the Loughinisland murders.”

What Lowry is attempting to do, however, is to isolate the Police Ombudsman’s conclusions from the wider question of collusion and its place in the British politico/military strategy to defeat republicanism.

Lowry argues that the British were soft on republicans. He writes:

“Republican leaders know they would have been killed long ago if the state was anything like as ruthless as they [republicans] pretend.”

Effectively he is playing British Tory Secretary of State Theresa Villiers’s hand for her and echoing her speech of February this year when she claimed that people are pursuing “a pernicious counter-narrative of the past”.

Villiers in her speech would go on to say that there were some who proposed a “version of the Troubles that seeks to displace responsibility from the people who perpetrated acts of terrorism and places the state at the heart of nearly every atrocity and murder that took place”.

She went on to say, in a remark that would come back to haunt her:

“It wasn’t the RUC or the [British] Army who pulled the trigger at Loughinisland.”

Coincidentally, the News Letter has mustered a number of commentators (generally viewed as liberal unionists, such as Alex Kane, former rugby star Trevor Ringland and Reverend Brian Kennaway) to echo Lowry’s analysis that “if there was collusion it was not institutional but between some members of the RUC and others”.

In other words we are, ad nauseam, being asked to believe that it was only some odd ‘bad apples’ here and there involved in collusion.

If, in the case of Loughinisland, as Dr Maguire suggests, we go back to the importation in 1987 of the weapons used in the Heights Bar attack, the evidence already in the public domain contradicts this.

We know (and have known for almost 30 years) that Ulster Defence Association Intelligence Officer Brian Nelson, a member of the British Army’s covert Force Research Unit, played the key role in procuring the Czech-made VZ58 assault rifle (a version of the AK-47) from Armscor in South Africa. Nelson’s military handlers – high-ranking officers in British Army Intelligence – were, at all times, up to speed with the progress of the arms transfer.

The RUC had “reliable intelligence” from “informants” involved in the importation and distribution of these arms, which were stored in the Glenanne farm in south Armagh of James Mitchell before distribution to the loyalist killer gangs, including the UDA, the UVF and Ulster Resistance.

And while some of the UDA’s share of weapons were seized by the RUC at Mahon Road, Portadown, the rest was spirited away after a tip-off to the death squads, the tip-off believed to be from a senior RUC officer.

While the Police Ombudsman maintains that some of the imported guns were used in up to 70 killings, Mark Thompson of Relatives for Justice says that research carried out by his organisation has calculated that 229 people were shot dead by loyalists using the weapons. This includes as many as 18 people in the Mid-Ulster area, among them Rose Ann Mallon, whose home was under SAS surveillance on the night she was shot dead in May 1994.

It is also worth reminding ourselves that former RUC police officer James Mitchell, in whose farm the arms were initially stored, was a prominent member of the notorious Glenanne Gang, which was made up of loyalist hit men working hand in hand with serving and former RUC members, UDR soldiers and British Military Intelligence operatives such as Captain Robert Nairac.

Anne Cadwallader, a case worker for the Pat Finucane Centre, attributes 120 killings to the Glenanne killers, including the 1974 Dublin/Monaghan bombings.

In 2007, then Police Ombudsman Nuala O'Loan revealed in her ground-breaking “Ballast Report” into the UVF’s Mount Vernon unit in north Belfast that an informer nicknamed “The Mechanic” was responsible for providing the getaway cars used by the Loughinisland killers.

The Mechanic was a close associate of Mark Haddock, himself a Special Branch agent whose Mount Vernon gang and its involvement in as many as 17 killings was the subject of Ballast.

The Mechanic – later identified as Terry Fairfield – maintains he passed on all the details of who was involved in the attack to his RUC Special Branch handler.

It has also emerged that Fairfield and the assault rifle used in the Loughinisland killings were linked to the 1993 killing of west Belfast painter Joseph Reynolds.

A Browning 9mm pistol recovered by the RUC alongside the assault rifle used in the Loughinisland killings was used to kill Martin Lavery in north Belfast in December 1992.

The difficulty for the British and their unionist allies is that collusion goes to the heart of their military, intelligence and political campaign in Ireland.

The strategies they employed and the methods they used in conjunction with their operational control over loyalist gun gangs exposes their willingness to kill citizens to assert their political control in Ireland.

Collusion is in their DNA.

Therefore the unionist response to the Ombudsman’s findings is to dissect and undermine its credibility and present a tale where collusion is where individual “rogue” officers let the majority down, that “random” attacks such as that in Loughinisland happened because “loyalist intelligence was bad”.

Writing on the Relatives for Justice website, Mark Thompson asserts that Loughinisland was deliberately chosen as a target because it is the ancestral home of the leading Irish-American businessman Bill Flynn, appointed by Bill Clinton as a Special Emissary, who was using his influence in the US to develop the Peace Process.

On the night of the shootings, Flynn accompanied Taoiseach Albert Reynolds to the Giants Stadium in New York to watch the same Ireland v Italy soccer match as those gathered in the Heights Bar. More crucially, Flynn and Reynolds were to discuss the possibility of a loyalist ceasefire. Seemingly, Flynn had already met secretly with loyalist leaders to encourage them “towards peace”.

Mark Thompson maintains that the County Down pub was deliberately targeted in an attempt to weaken US influence and to send a message to Flynn and his allies.

What is most problematic for the British/unionist alliance is the fact that the families of those killed as a result of this collusion are now fighting back.

The Loughinisland families and the McGurk’s Bar bombing families in the North – and the relatives of the Dublin/Monaghan bombings in the South – are examples of that fight, and the more information they uncover the more the politico/military strategy behind these hundreds of state killings will be exposed. 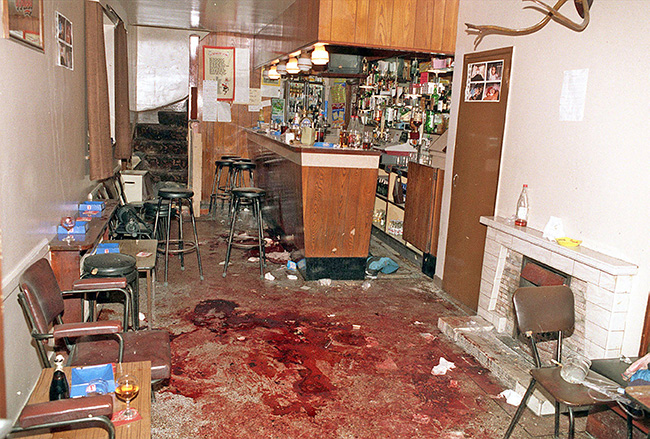