Putting the island of Ireland first

Brexit: To have one part of the island inside the EU and the other outside makes no sense 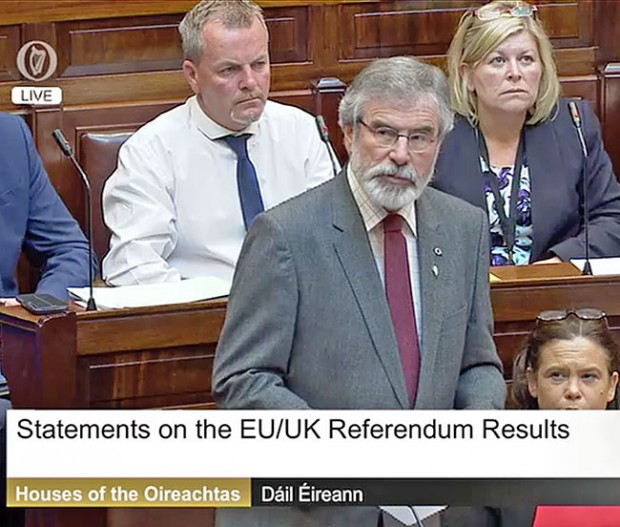 • Gerry Adams TD speaking in the Dáil on Brexit

Brexit puts at risk the human rights legislation that underpins much of the Good Friday Agreement, the cross-Border bodies and the all-Ireland structures

DIVISIONS over the European Union within his British Conservative Party led Prime Minister David Cameron to make the mistake of calling a referendum on Britain’s membership of the EU.

The debate, especially in recent weeks, was marred by racism and hatred and fear. Immigration became the dominant theme for the “Leave” side.

Putting to one side the unacceptable aspects of the Brexit debate, the outcome is a vindication of Sinn Féin’s long-standing criticism of the democratic deficit at the heart of the EU, the two-tier nature of its structures, and the social and economic inequalities inherent in the political ethos of the bigger states.

Sinn Féin has a consistent position of opposition to these unacceptable and undemocratic aspects of the European Union. We have also consistently argued for a more robust and less-compliant policy from successive Irish governments. 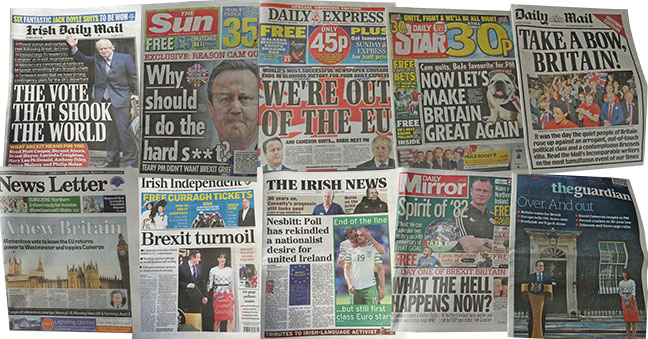 In 1972, Sinn Féin and other progressives campaigned against membership of the EEC. Over the decades, we have modified our position to one of critical engagement. This position was formally adopted at our Ard Fheis in 1999.

Reform of the EU has been necessary for decades now. The outcome of the Brexit referendum should encourage such a process and it should be undertaken with urgency. I have no confidence that the elites will apply themselves to this task. I doubt if the Irish Government has any real commitment to this objective.

Those of us who want a social European Union – and there is an EU-wide demand for such a fair dispensation based on equality – must find ways of uniting behind this demand.

On this island, notwithstanding partition, we should also accept the vote in the North. People voted to remain within the EU. That should be upheld.

Some will say we are bound by a so-called ‘United Kingdom vote’. Sinn Féin says we are not. We need to put the island of Ireland first. We stand by the vote of the people of the North. All of us need an island-wide vision.

The fact that the Border will now become an international border between an EU member state and a non-member state creates particular concerns for the people of the island.

There is now a huge responsibility on the Irish Government to think nationally, in the real sense of that word – that means 32 counties.

The government, as a co-equal guarantor of the Good Friday Agreement, also has a responsibility to defend the agreement and its political institutions.

The British decision also puts at risk the human rights legislation that underpins much of the Good Friday Agreement, the cross-Border bodies and the all-Ireland structures. That must be resisted.

Sinn Féin believes that that can best be achieved by the maximum co-operation between the Executive and the government in Dublin upholding the vote of the electorate in the North.

The British Government has forfeited the claim to represent the North at an EU level. Its policy has been rejected by the people.

The Irish Government must work to promote the interests of the whole island and the North in particular in future talks at an EU level, and to support the rights of ministers in the North to deal directly with the EU institutions.

In the time ahead this should include a referendum on the Border.

The Democratic Unionist Party must also respect the “Remain” vote. The majority of citizens in the North, including many unionists, rejected its exit policy. The DUP should accept this.

The people of the North have the right to have their voice heard and their vote respected.

To have one part of the island inside the EU and the other outside makes no sense. Sinn Féin believes that the people of this island are best placed to run our own affairs in our own interests.

The task of everyone, therefore, must be to agree policies and strategies that can minimise any problems that will arise as a consequence of Brexit and to use this crisis to create a new Ireland and a new EU.