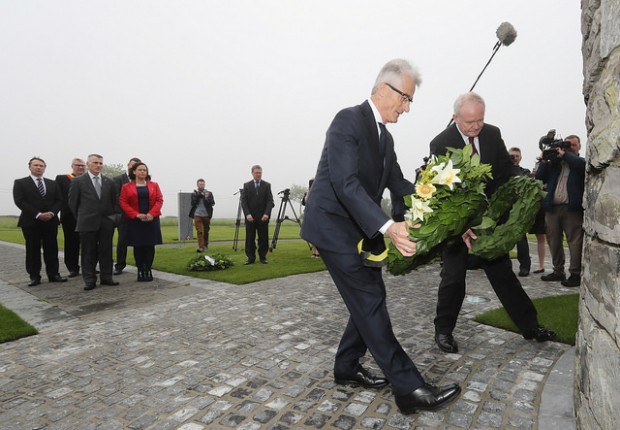 • Martin McGuinness lays a wreath at the First World War monument in Flanders alongside Geert Bourgeois, Minister-President of Flanders.

If we are to build reconciliation on this island, we all – nationalist or unionist – need to recognise and accept the complexity of the historical events and differing political narratives that make us who we are as a community and as a people.

THE VISIT by Sinn Féin’s Martin McGuinness, Mary Lou McDonald and Declan Kearney to the Somme and Flanders’ fields where the carnage of the First World War included the deaths of more than 30,000 men from the Ulster and Irish divisions of the British Army must be viewed through the prism of reconciliation.

If we are to build reconciliation on this island, we all – nationalist or unionist – need to recognise and accept the complexity of the historical events and differing political narratives that make us who we are as a community and as a people.

As republicans we recognise the human suffering and also the importance events such as the Somme commemorations hold for the unionist section of our people. A generation from the unionist tradition was lost in the First World War. This was a seminal event for the unionist community.

Remembering those Irishmen who fought and died for the British Army, some of whom fought under a nationalist banner, has always been a thorny issue for Irish republicans. We are a generation that has lived with the reality of actions of crown forces. We proudly carry with us our patriot dead.

We stand with James Connolly when he said on 15 August 1914, just weeks after the outbreak of war:

“If these men must die, would it not be better to die in their own country fighting for the freedom of their class, and for the abolition of war, than to go forth to strange countries and die slaughtering and slaughtered by their brothers that tyrants and profiteers might live?”

The scale of the loss of so many Irish lives adds to the tragedy of what was a futile and pointless war.

It is fitting to remember those from across all of Ireland who died in the First World War. This loss of life should be remembered. The loss of so many for so little should not forgotten.

Listening to and respecting the views of others does not in any way diminish our republicanism. Respect, inclusion and equality are central to republicanism.

This initiative from Sinn Féin is another step in demonstrating respect for, and developing a greater understanding of, those from unionist and nationalist backgrounds who lost their lives far away in Flanders’ fields.