Collusion at the heart of Cappagh killings 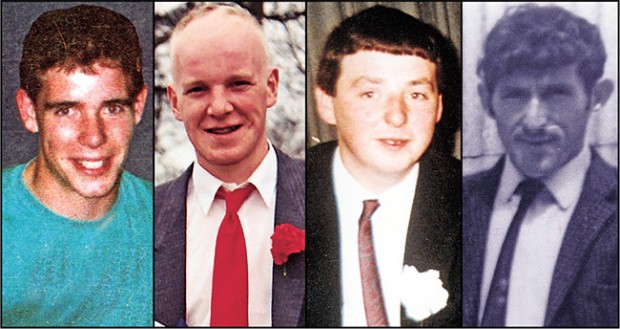 THE LONG-HELD BELIEF among nationalists living in the east Tyrone area that the locally-recruited Ulster Defence Regiment of the British Army was involved in killings claimed by unionist death squads has been reinforced by the findings of the recently-published report, Collusion in Cappagh Killings.

The report, which documents the Ulster Volunteer Force killings of four men at Boyle’s Bar in the small Tyrone village in 1991, was released at the beginning of March by campaign group Relatives for Justice.

The human rights organisation revealed in their findings that, 10 months after the attack in which Dwayne O’Donnell, John Quinn, Malcolm Nugent and Thomas Armstrong were shot dead, “four UDR soldiers based in Cookstown were arrested and questioned in relation to the murders”.

The RFJ report also quotes local reports that claim the four were flown to Scotland in 1991 where they were “debriefed”. On their return to Ireland the quartet were “given a financial package and told to resign” from the UDR.

Local people also maintain that these four UDR figures were given SAS training and are convinced they were involved in other killings such as those of republican activists Seán Anderson and Tommy Casey.

What concerned people more was the fact that in the weeks before the gun attack on Boyle’s Bar, UDR patrols (accompanied by the RUC) entered the bar frequently and asked customers to identify themselves.

On one occasion just prior to the shootings, a joint UDR/RUC patrol drew a plan of the bar.

Given that many loyalist attacks were preceded by British Army or UDR and RUC members drawing plans of houses and specifically noting any ‘security’ on the premises, this acton caused considerable unease among the customers.

The killings in Cappagh took place on March 1991 when a unionist gang drove into the car park of the village’s only pub.

Armed with assault rifles, the gang were preparing for their attack on the bar when another car – containing Malachy Rafferty, John Quinn, Malcolm Nugent and Dwayne O’Donnell – entered the car park.

The gunmen immediately turned their attention to the new arrivals, directing a hail of gunfire at the car’s occupants. 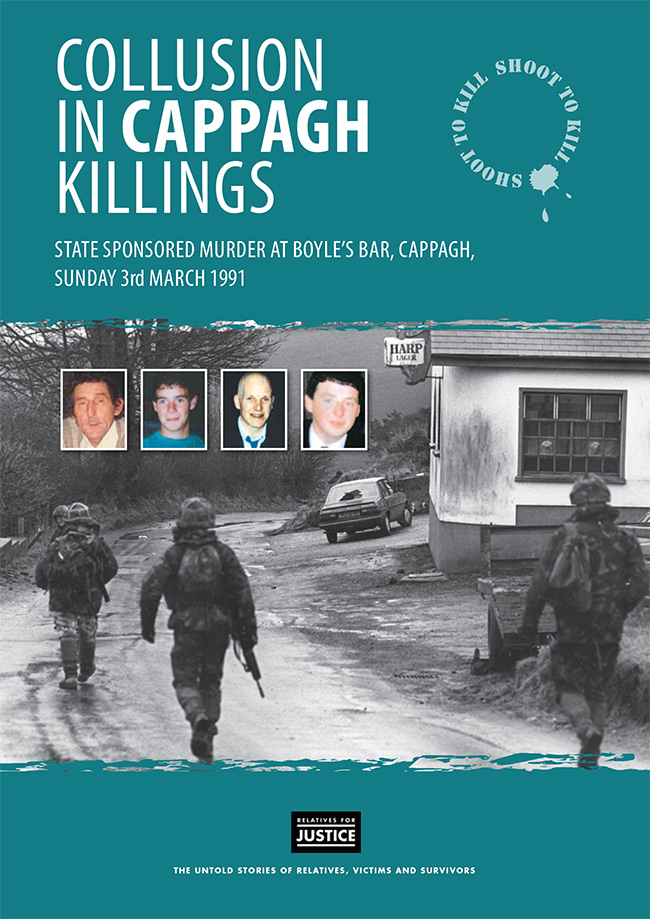 Quinn, the 22-year-old driver, and Nugent were shot dead in the car while O’Donnell managed to escape the car but was found dead behind a nearby wall.

Rafferty believes that in trying to escape O’Donnell distracted the gun gang and, in effect, saved his life.

After killing Nugent, the killers fired into the bar through an open toilet window and it was then that Thomas Armstrong was killed.

The significance of this is that the man who fired into the bar was a tall man, fitting the description of one of the four-member UDR squad mentioned earlier as having been questioned about the attack.

Secondly, the fact the attackers seemed sure that they could hit drinkers in the bar area by firing through the window and this knowledge could only, according to local people, have been gleaned from having prior knowledge of the layout of the building. Their suspicions fall heavily on the UDR and RUC personnel who drew the outline of the premises weeks earlier.

That Quinn, Nugent and O’Donnell were IRA Volunteers has been used by the UVF to claim that they had “brought the war to the Provo heartland” of Cappagh. It is, however, almost certain that the assailants intended to target the bar regardless of who was there but that the dead men coincidentally happened on the ambush as it was being prepared, disturbed the gunmen and were cut down.

THE history of the weapons used in the Boyle’s Bar attack has been investigated by Relatives for Justice and they have connected them to 18 killings and three attempted killings in the east Tyrone/north Armagh area.

The VZ58P Czechoslovakian assault rifles (similar to the AK 47) and the ammunition used in them were part of the consignment of weapons brought into Ireland by British Army Intelligence agent Brian Nelson.

Both weapons used were recovered after separate arms finds in Coagh, County Tyrone, in January 1992 and in Kilmore, north Armagh, in 1993.

The RFJ believes the RUC deliberately covered up the links to many of these 18 killings and the weapons used to protect the killers.

Speaking at the launch of the report, Mike Richie of RFJ stated:

“There is a real nexus of collusion that underlies this case and it needs to be unpicked if the families are going to have confidence in the justice system.”