Lest we forget: Embracing the opportunity presented by a shared history – Kingsley Donaldson 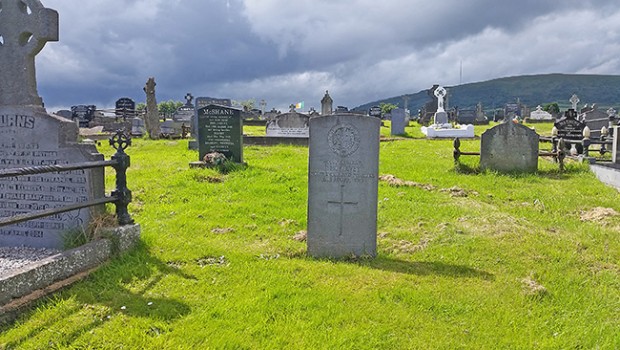 • Graves of the McKelvey family in Milltown Cemetery, Belfast. (Top picture) A father who served with the British Army is buried under a military headstone while (bottom picture) his son, an IRA lieutenant-general, executed by Free State forces in 1922 is

The First World War Centenary Committee welcomes uncomfortable conversations about how to encourage people of all faiths, backgrounds and beliefs to engage in increasing their understanding about Ireland and the First World War 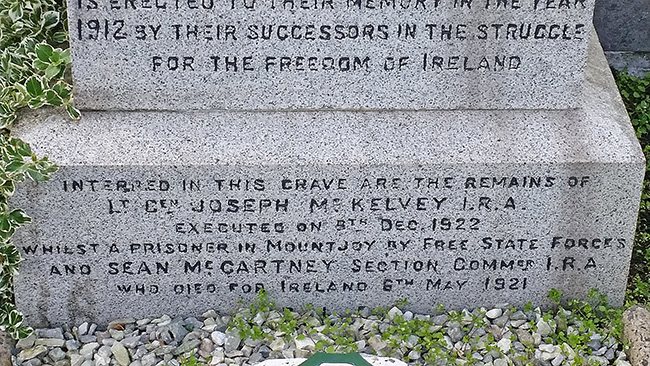 THE YEARS between 1912 and 1923 saw major transformation in Ireland. The evolution and militarisation of the Ulster Volunteer Force and the Irish Volunteers, the First World War, the Easter Rising, the War of Independence, the Anglo-Irish Treaty and the subsequent Civil War all still resonate to great extent today in the politics of Northern Ireland and the Republic of Ireland. It was both a violent and fascinating period in Irish history.

The centenaries of these momentous events in our shared history offer an opportunity to look with fresh eyes and engage with our past in a more open and creative manner. The fear amongst republicans of finding that ‘Granda fought for the Brits in France’ or in a unionist family that ‘Great Aunt Lizzie nursed the rebels in the GPO’ need not prevent us from looking anew at these events and seeking areas of mutual understanding.

Joe Austin, writing in this column last month, remarked: “2016 presents all traditions on this island with the opportunity to engage in a new conversation.” He is right. The challenge for all of us is how to turn such noble sentiment into real actions that have meaning and impact. How to find the will and the way?

As we approach the centenary of the Battle of the Somme, from July to November 2016, we will remember not only the valiant unparalleled actions of the 36th (Ulster) Division at Thiepval on 1July but also the heroic service and sacrifice of the 16th (Irish) Division at Guillemont and Ginchy on 3 and 9 September. Today, in Northern Ireland, the service of the 36th Division, made up in great part from the Ulster Volunteer Force, forms a key element in the Protestant unionist narrative. Conversely, the 16th Irish Division, drawn from the Irish Volunteers, which had within its ranks Catholic nationalists from across Ulster, is almost unknown and unspoken of. Much credit is due to the 6th Connaught Rangers Research Project and historians Richard Grayson and Philip Orr who have helped to raise awareness of these men and their stories.

Over the course of the past three years I have spoken with a number of senior republican and nationalist figures about the First World War. They have related stories of family members who served in the British Army in the First World War. Many went on to fight with the IRA; some fought against the IRA; others simply returned home and carried on with their lives. All served their country, Ireland, and should not be forgotten.

The story of the McKelvey family is a case in point. A father who served with the British Army and is buried under a military headstone in Milltown, and his son, an IRA lieutenant-general, executed by the Free State forces in 1922 also buried in Milltown, is but one example of the uncomfortable and challenging legacy of those times. Thanks to the innovative work of Tom Hartley, the stories of soldiers buried and remembered in Milltown and Belfast City cemeteries are now more widely known.

“If I allow the scars of the past to determine what happens in the future then we’re not going to move Northern Ireland forward.”

“People like myself, Arlene Foster and all politicians have a huge role to play by giving positive leadership in the work of reconciliation and coming to terms with the past.”

So, the opportunity is there for republicans and nationalists, unionists and loyalists, to ‘leave the trenches’ and journey into ‘no-man’s land’, to this place of shared history. In June 1917, at the Battle of Messines, the men of the 16th and 36th Divisions fought alongside one another. Perhaps it is here, a century later, in Flanders fields, where the poppies blow between the crosses row on row, that we can take those first steps.

Kingsley Donaldson is the Director of the Causeway Institute for Peace-building and Conflict Resolution International and Secretary of the Northern Ireland First World War Centenary Committee.  He retired from the British Army in 2015 after a career of more than 25 years of service.