The Rising then and now 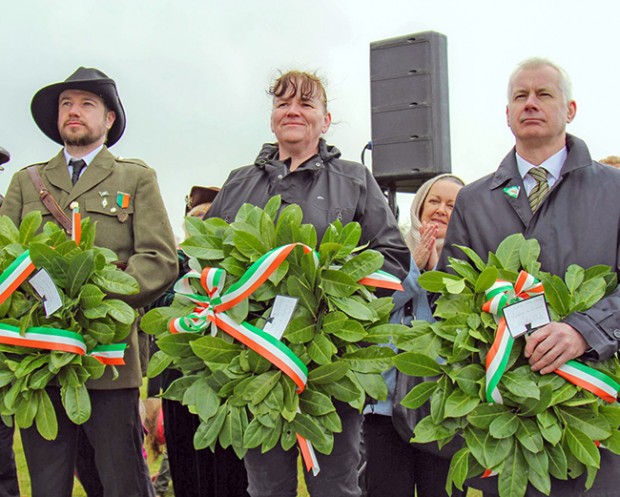 • Darren Griffin (left), whose great-grandfather George Geoghegan of the Irish Citizen Army was killed at City Hall, laid a wreath at the 1916 Plot in Glasnevin, together with Nicola King and Seán Crowe TD

The widespread public enthusiasm and participation this Easter 2016 shows that successive governments in the 26 Counties tried but failed to quell the sense of pride in our heritage of republicanism, resistance to oppression and commitment to a genuine Republic

FOR THE PAST FEW WEEKS, Dublin City centre has been a sight to behold with imagery of 1916 everywhere. Proclamations, flags, portraits of the executed leaders, scenes of the Rising, hang from and in countless buildings. To those who remember the 75th anniversary in 1991, the contrast is striking.

On Easter Sunday I travelled into Dublin City centre with a group of 1916 Rising uniformed ‘re-enactors’, mainly from my own area of Kilbarrack/Donaghmede. The North Dublin 1916 Comrades group was only formed a few weeks before Easter. In that short time they assembled fine uniforms for men and women, replica rifles and had practised drill.

This is just one group of many around the country as people enthusiastically embraced the celebrations of the Rising. As our group travelled by train into Connolly Station they were repeatedly asked for photographs and it took us 20 minutes to get through the station itself! Walking down Talbot Street the group was singing Oró ‘Sé do Bheatha a Bhaile to applause from bystanders before we joined the thousands of people who assembled for the main Dublin Sinn Féin Easter commemoration parade to the 1916 Plot in Glasnevin Cemetery. One of the group is Darren Griffin. Darren’s great-grandfather was George Geoghegan of the Irish Citizen Army, who died at City Hall during the Rising and is buried in that plot with 15 other Volunteers. Darren laid a wreath on behalf of the relatives.

On Monday, I joined the commemoration in Dún Laoghaire and it was uplifting on the parade to see so many homes along the route displaying the Proclamation and the Tricolour. It was a fitting close to a weekend which began in bright sunshine on Friday as many thousands joined the Lost Leaders March from Kilmainham Gaol to Arbour Hill. The numbers who came out for all the events, including the main state parade through the city, were massive. 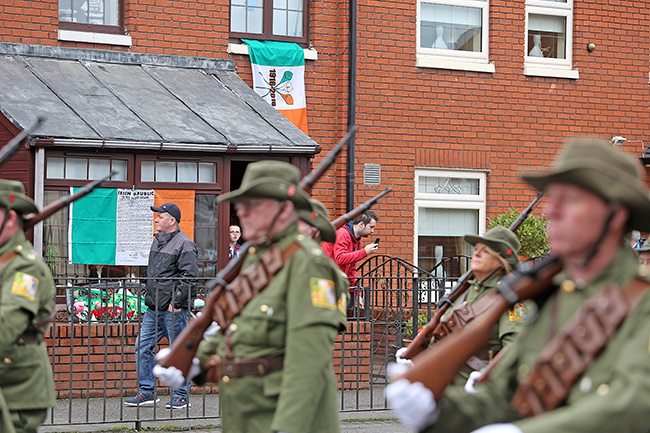 In 1991, the scene could not have been more different.

The Fianna Fáil/Progressive Democrats government all but ignored the 75th anniversary, apart from a ‘drive-by’ wreath-laying at the GPO. The current caretaker Fine Gael/Labour Government was set to make a complete hash of the centenary, as seen with their now infamous initial promotional video which basically ignored the actual Rising itself in favour of modern-day celebrities. Hugely negative reaction forced them to change tack and go for a full-scale commemoration.

The widespread public enthusiasm and participation this Easter 2016 shows that successive governments in the 26 Counties tried but failed to quell the sense of pride in our heritage of republicanism, resistance to oppression and commitment to a genuine Republic.

Like its predecessor in 1966, the Government has tried to channel this into a purely 26-County sentiment, claiming that the current state is the Republic sought by the men and women of 1916. But the failure of the state and of successive Governments on so many levels is so obvious that this effort cannot succeed.

It is up to genuine republicans now to continue to point out that partition, gross social and economic inequality, and the marginalisation of the Irish language are totally incompatible with the Proclamation of the Irish Republic and the sacrifice of the men and women of 1916. And in the years to come there are many other anniversaries which can be milestones on the journey to the true Republic.

Easter 2016 has seen the completion of the excellent O’Brien Press 16 Lives series. The final two volumes are two contrasting figures – the best known and least-known of the executed leaders, Patrick Pearse and Thomas Kent. Ruán O’Donnell’s biography of Pearse concentrates on his leading role in the preparation for the Rising and in Easter Week itself. It makes a good companion volume to Patrick Pearse – the Making of a Revolutionary by Joost Auhusteijn (Palgrave Macmillan 2010), which has more on his earlier life and his political formation.

Meda Ryan has done a superb piece of work on the life of Thomas Kent. This executed leader provides a remarkable link between the Irish in America among whom he worked, the Land War in Cork in which his family was deeply involved, and the Irish Volunteers. Kent’s life and talents and significant contribution deserve to be much more widely known.