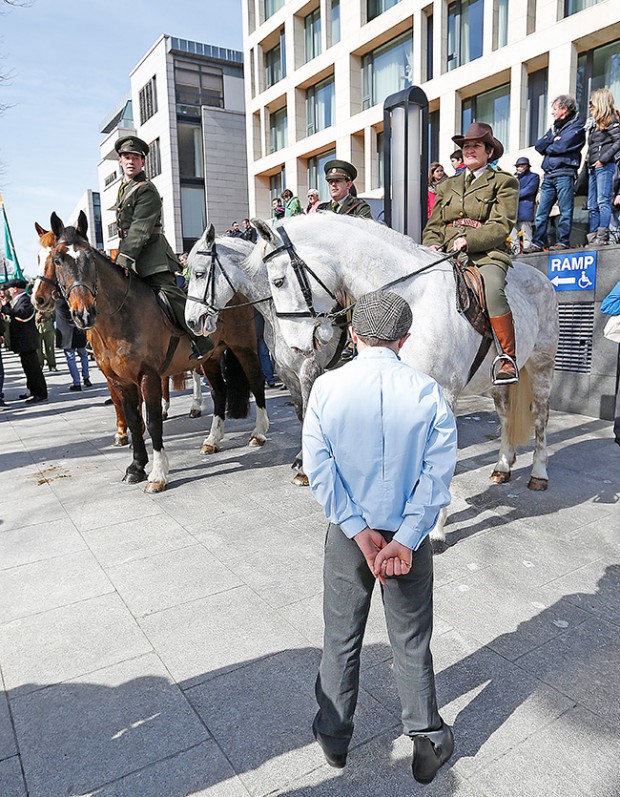 • The Irish Volunteer Cavalry gets ready

Unlike the state-organised events, the Lost Leaders March was a public and inclusive occasion, encouraging people to get involved

THOUSANDS OF PEOPLE from across Ireland and further afield gathered outside Kilmainham Gaol in Dublin on Good Friday to remember the executed leaders of 1916 with a march to their final resting place at Arbour Hill.

In the immediate aftermath of the Rising, 14 of the leaders who had fought in Dublin were executed in Kilmainham Gaol by British firing squads and their bodies buried in a pit of quicklime in nearby Arbour Hill Prison.

The site, separated from the nearby military cemetery by a prison wall, was chosen to prevent it becoming a shrine to the freedom fighters. The state  removed the wall between the military cemetery and the prison yard to create the 1916 Plot. The other executed leaders, Thomas Kent and Roger Casement (who were killed in Victoria Barracks in Cork and Pentonville Prison in England) were eventually reinterred in Castlelyons, Cork, and Glasnevin, Dublin, respectively.

Onboard the Luas tram on Good Friday morning, en route to Suir Road near Kilmainham, one carriage packed with families carrying flags and wearing Easter lilies, spontaneously burst into a rendition of the rebel ballad The Merry Ploughboy – much to the delight of the tourists onboard.

The sun was splitting the stones as bands, re-enactors and members of the public gathered on the plaza opposite Kilmainham Gaol in anticipation of the event. Dublin’s Rising Phoenix Republican Flute Band and the Sword of Light Pipe Band from New York kept the growing crowds entertained as the march got ready to depart.

In comparison to the state commemorations, most of which were invite-only or ticketed for those wanting to observe the main part of the events, the Lost Leaders March was a public and inclusive event in which anybody could take part rather than just look on as a spectator.

And citizens were certainly enthusiastic. 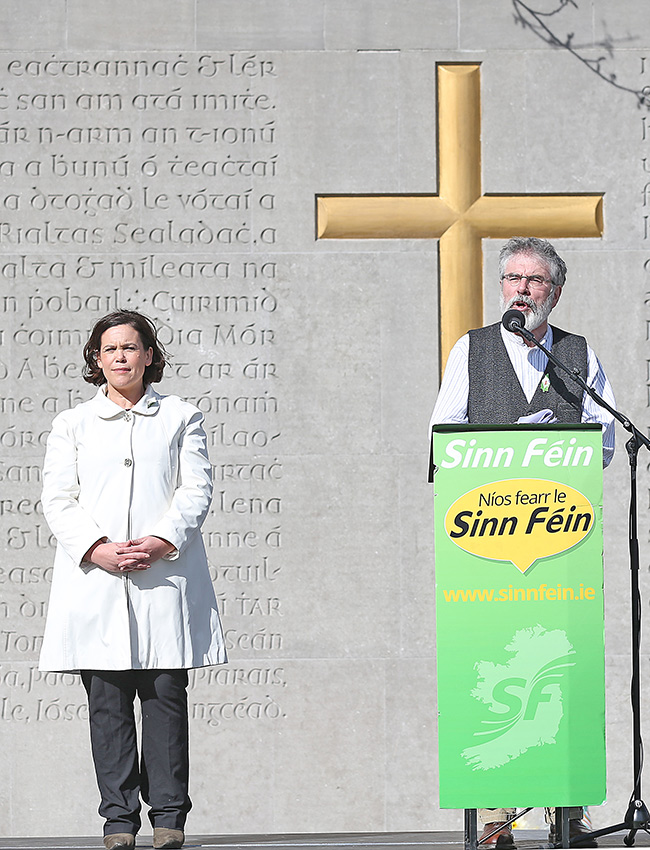 A huge effort was made to get into the spirit of the march by dressing in authentic early 1900s style with flat caps, shawls, blouses and collarless-shirts everywhere to be seen. And even one or two antique baby carriages!

By the time the march moved off from Kilmainham, led by the Irish Volunteer Cavalry, there were several thousand people on the street, including relatives of those who had fought in 1916. Along Kilmainham Lane, local residents and customers in businesses came out to applaud the bands and re-enactors.

The Lost Leaders March had a strong focus on the contribution of Ireland’s emigrant community to the cause of Irish freedom. Irish communities in the United States and Canada in particular played a vital role in not only funding the fight for freedom but also in popularising the struggle for independence and acting as a counter-balance to the influence of the overwhelmingly pro-British press in Britain, Ireland and America.

Large numbers of Irish-American and Irish-Canadian activists were present in Dublin on Good Friday. Among them were representatives and activists from Friends of Sinn Féin USA and Canada, the US and Canadian trade union movements, Irish Northern Aid and the Ancient Order of Hibernians.

The festival atmosphere was in large part thanks to the US and Irish bands taking part, including the O’Neill/Allsop Memorial Flute Band, who won the Joe Cahill Trophy at the annual Bodenstown Commemoration in 2015 for Best Band.

The colourful Edward V. Larkin Memorial Flute Band from Rockland County, New York, who are linked to the Ancient Order of Hibernians, were another favourite. Their supporters were keen to point out that during the 1916 Rising a unit of the AOH-linked Hibernian Rifles fought under the command of the Irish Citizen Army in the GPO.

Upon reaching Arbour Hill, thousands surrounded the graveside of the 1916 leaders to listen to music and speeches. Wreaths were laid by Sinn Féin, the LiUna trade union (the Laborers’ International Union of North America, representing more than half a million workers in the US and Canada) and various other international organisations while children also laid lilies on the graves. 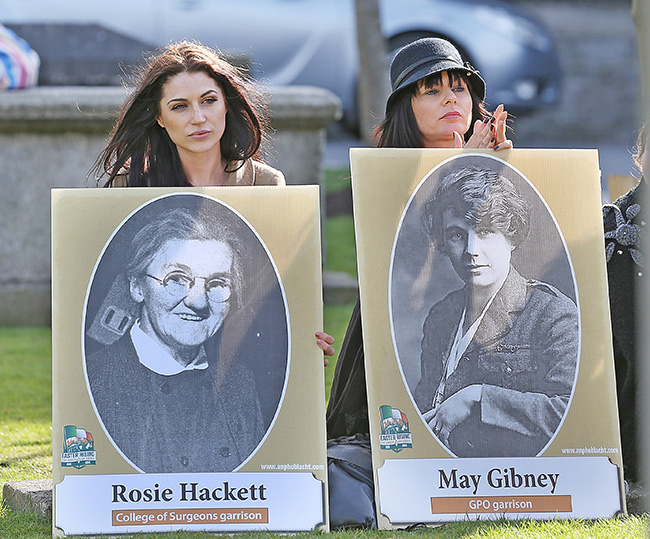 The Cabra Historical Society put on another fantastic performance as they donned full Volunteer uniform and delivered a stirring rendition of rebel marching tune Óró sé do bheatha abhaile at the graveside of the leaders.

Mary Lou McDonald TD chaired proceedings and Megan Fearon MLA read the Roll of Honour of those buried in Arbour Hill. There was also a special presentation made to Colm Moore, whose successful High Court action against the state resulted in a timely victory for the Save Moore Street campaign.

The main speech was given by Sinn Féin President Gerry Adams TD, who hit out at a recent campaign to rehabilitate the British Army’s recruiting officer in Ireland, John Redmond, and attempts to denigrate those who instead believed Ireland should fight for its own freedom.

“Connolly described Redmondism as ‘a carefully-staged pantomime to fool nationalist Ireland’ and that, in return, Redmond’s party would ‘send forth more thousands of Irish men and boys to manure with their corpses the soil of a foreign country’.

“Isn’t it strange then that those, so worried that honouring the 1916 leaders would retrospectively justify violence, say nothing about Redmond’s role in sending tens of thousands of Irish to fight Germans, Austrians and Turks with whom Ireland had no quarrel? Was John Redmond not a ‘man of violence’?” Adams asked the crowd, to huge applause and cheers. 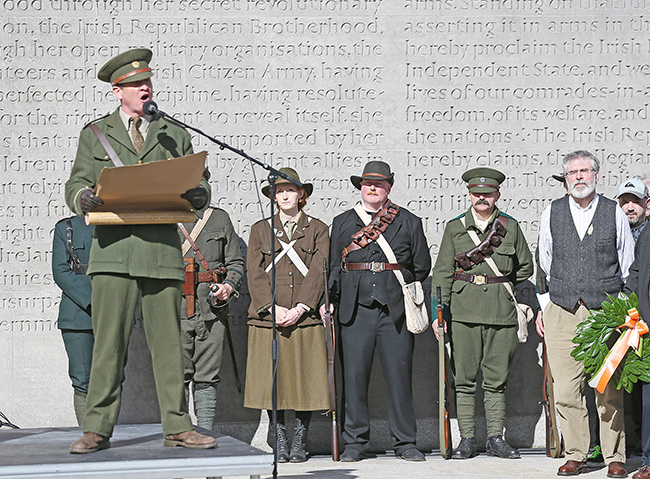 Keeping with the theme of historical revisionism and the apologetic attitudes towards British imperialism that have become so commonplace in the Irish media, he said:

“I suspect that behind the latest Redmondite crusade is a fear not of violence but of the 1916 Proclamation which enshrines principles of equality and Irish sovereignty that still challenge the privileged in our society.”

He described the battle between the relatives of those who fought in the 1916 Easter Rising and the state (in defence of the interests of a property developer) in the High Court to save the national monument at Moore Street as “a metaphor of our times”:

“It is not a surprise therefore that the recent proposal for a 1916 banner erected by the Dublin City Council in Dublin’s College Green – which doesn’t feature any of the 1916 leaders! – came from the Department of the Taoiseach.

“The banner is in line with the Government’s initial video released to promote the 1916 celebrations that did not include any reference to the men and women who fought in the Rising.”

Adams paid tribute “to all of those who, in every decade since 1916, stood by Ireland and stood by the Republic” and said 2016 presents an historic opportunity to look realistically towards ending partition, sectarianism and division in Ireland:

“We have an opportunity to see how we can make the united, independent Ireland envisaged in 1916 a reality. These should be the goals of all progressive political forces on this island.

“A united Ireland means the unity of the people of this island, including those who see themselves as British. That is why Irish governments must pursue every avenue to promote all-Ireland co-operation and to build relationships between all our people.”

Gerry Adams said genuine efforts to reach out to unionists must be made and that partitionist thinking by policy makers must be challenged.

“As we stand here today by the graves of our Lost Leaders, let us be clear – a united Ireland and a real Republic is the only fitting monument to their memory.”