Divisions must be healed to realise vision of 1916 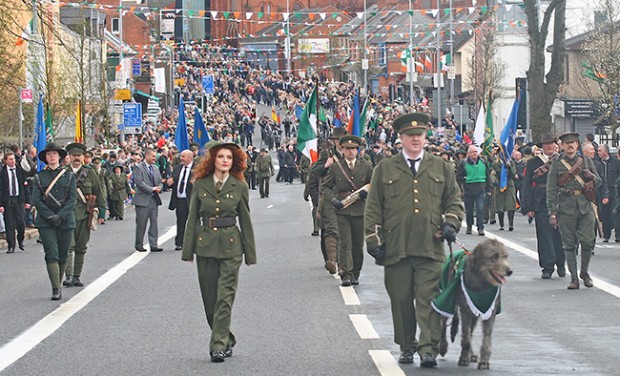 THE hurts and divisions of the past must be healed if we are to realise the vision of the 1916 Proclamation, Sinn Féin President Gerry Adams TD told the Belfast Easter Rising Centenary Commemoration, one of the most imaginative, colourful, vibrant and heartfelt events in a series paying tribute to the ideals of the men and women of one hundred years ago.

“The Peace Process and the Good Friday Agreement marked a historic shift in politics on this island.

“For the first time, the roots of conflict were addressed and a democratic route to Irish unity opened up.

“But there is much yet to be done. Hurts must be healed, divisions ended and the scourge of sectarianism must be tackled.

“There is more to be done right across Ireland. While there have been improvements since it was first established, the southern state is not the Republic proclaimed in 1916.

“Current efforts by the Dublin Establishment to pretend that it is are an insult to the men and women of 1916.”

Turning to those critics who say that honouring the 1916 leaders might retrospectively justify violence, Gerry Adams responded:

“But they say nothing critical of John Redmond and Edward Carson’s role in sending tens of thousands of young men to fight Germans, Austrians and Turks – with whom they and Ireland had no quarrel. Thirty-eight million people were killed in that imperial adventure.

“Were John Redmond and Edward Carson not ‘men of violence’?”

Carson certainly was an imperialist – a big house unionist with little concern for the social or economic needs of working class unionists or the rest of us.”

“It is a freedom charter for all the people of this island which guarantees religious and civil liberty and promotes equal rights and opportunities for all citizens.

“The Proclamation is also a declaration of social and economic intent for a rights-based society in which the people are sovereign.

“These are the principles on which Sinn Féin stands today.”

Applauding the commemoration events, particularly the community-based, inclusive initiatives which encouraged public participation, Gerry Adams said that when the centenary has come and gone there should be more left behind than a memory of a good day out.

“The year ahead is a time for renewal and planning,” he said. “A year for promoting the republican ideals of democracy and equality.” 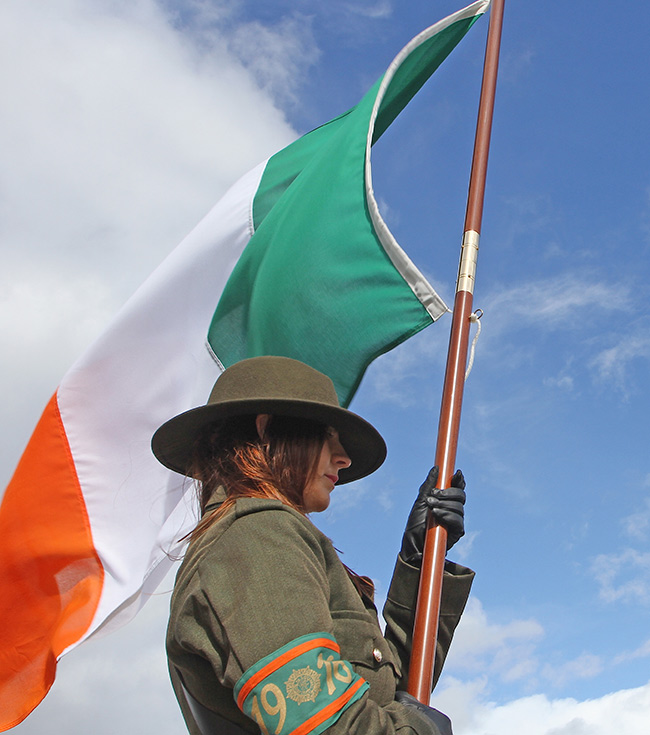 • The national flag at the Republican Plot in Milltown Cemetery

“We expect to double our representation in the Seanad. We hope they will include Niall Ó Donnghaile, a good east Belfast republican.

“And in May there will be Assembly elections.

“With each election, the Sinn Féin vote grows and the number of elected representatives increases.

“But it’s what we do with this political strength that is really important.

“Sinn Féin is now the main opposition party in the Dáil.

“In the Assembly, Sinn Fein has been the driving force behind the progressive measures that have blocked water charges, protected free prescriptions, defended welfare payments and promoted the Irish language.

“Despite the Irish and British Governments’ negativity, Sinn Féin has delivered the Fresh Start deal which protects core public services, particularly in health and education and the most vulnerable in our society.”

The Sinn Féin leader said that a united Ireland means the unity of the people of this island, including those who see themselves as British.

“That is why Irish Governments must pursue every avenue to promote all-Ireland co-operation and to build relationships between all our people,” the former MP for West Belfast and now TD for Louth said.

“This must include genuine efforts to outreach to the unionists on the basis of equality.

“The Assembly elections will be on May 5th – the anniversary of Bobby Sands’s death after 66 days on hunger strike.

“We want to emerge with a stronger mandate that will allow us to continue with our work to deliver a future of equals, in a society of equals for all our citizens.”