‘To think that Connolly once lay wounded in the far corner, with other members of the Provisional Government, all of them signatories to the Proclamation, gathered around him for a council of war, sends a chill down the spine’ – High Court Judge Max Barrett

THERE WERE CHEERS and handshakes all around Court 11 at the High Court in Dublin on 18 March as Justice Max Barrett announced a victory for the Save Moore Street campaign to halt ongoing demolition and remove a banner erected on the site by the Heritage Department without planning permission.

Relatives of the 1916 freedom fighters were in the court to hear the result as were representatives from Sinn Féin, People Before Profit and trade union officials. The court action was taken by Colm Moore on behalf of the campaigners.

The 399-page ruling agreed with a wealth of evidence from historians and experts that the buildings and streets surrounding 16 Moore Street are of huge historical significance and should be protected.

Justice Barrett had visited Moore Street himself to see the site, saying of 16 Moore Street:

“To think that Connolly once lay wounded in the far corner, with other members of the Provisional Government, all of them signatories to the Proclamation, gathered around him for a council of war, sends a chill down the spine.” 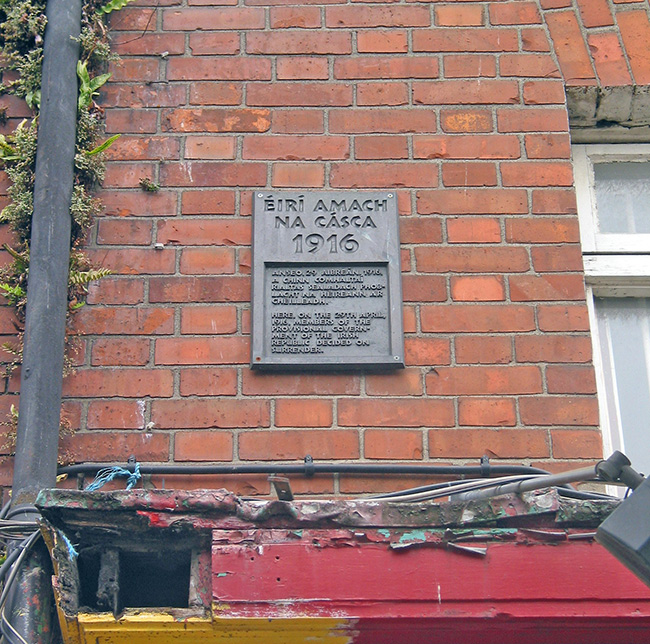 “This is the culmination of a decade-long campaign where citizens of Dublin came together to protect and preserve the very birthplace of the Republic. They stood together in principle over a decade against great odds. It’s an  amazing day for us and a lot of work remains to be done.”

He said the ruling vindicated the stance taken by the Save Moore Street campaign when they met with Government ministers and TDs throughout the years.

“There isn’t anybody who supports building a shopping centre on the Moore Street Battlefield site,” he said. 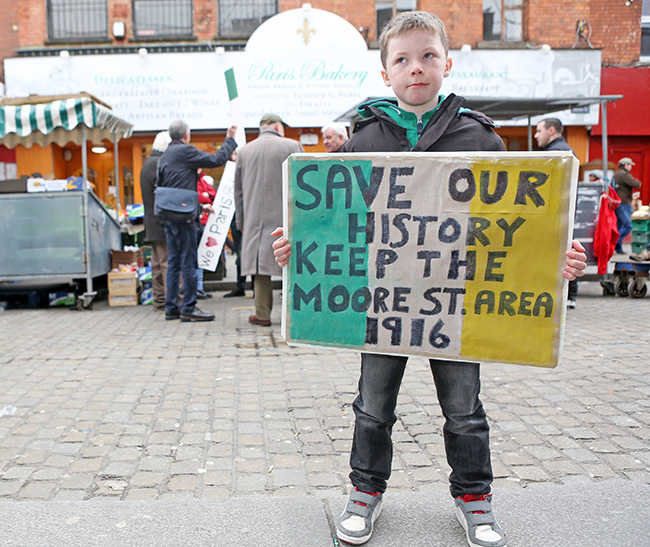 “Today is a victory in a case that the 1916 relatives should never had have to put forward. It’s shocking that on the 100th anniversary the relatives of the very people who led to the establishment of this state had to bring the now-defunct Fine Gael/Labour Government to court to honour the people of 1916 and save the final headquarters of the Provisional Government,” he said.

Proinsias Ó Rathaille, grandson of The O’Rahilly, who was killed during the rebels’ charge down Moore Street and after whom O’Rahilly Parade is named, echoed Colm’s view. He said it would go down in history as one of the most important days of the centenary.

“This is not just a victory for us but for the people of Ireland and a victory for future generations and the Irish Diaspora. I am over the moon and I feel justice has been done.”

Directly after the court ruling, the relatives arrived on Moore Street to scenes of jubilation as activists and members of the public cheered and chanted “Save Moore Street” as they made their way towards Number 16, the last headquarters of the Provisional Government.

“It took tremendous courage for Colm and his legal team to take a case against the state. We now have a victory. It’s now up to the state to come up with a new plan to build a fitting, respectful museum to the battlefield site of 1916 – that means Moore Street and its environs – as it was the last headquarters of the 1916 leaders.”

Activists have called on Acting Heritage Minister Heather Humphreys to introduce a preservation order for the entire Moore Street National Monument area as designated in the High Court ruling.