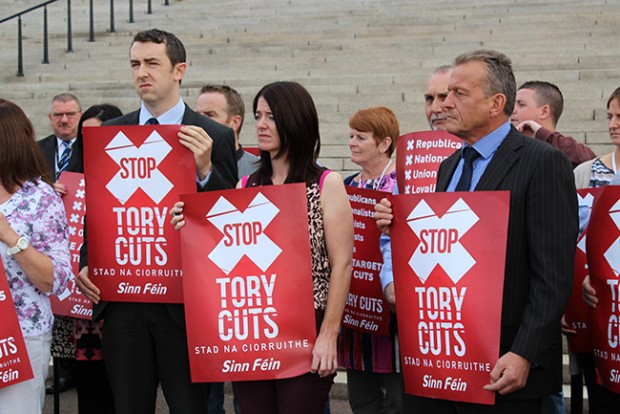 • While other parties accepted the British Government’s mantra of austerity, Sinn Féin secured a unique package of protections worth more than £500million to help protect those most in need

Significantly, the Executive stopped the introduction of water charges, ensuring that domestic users do not have to pay for water

THE LAST FIVE YEARS of the Assembly at Stormont have been characterised by intense periods of headline-grabbing negotiations and less-publicised rates of unprecedented delivery.

The tone for the mandate of the Assembly was set with the election of a British government made up of the Tories and Liberal Democrats wedded to austerity.

The reelection of of an undiluted Tory Government in 2015 copperfastened the Westminster cuts agenda.

In contrast, Sinn Féin remained constant in its opposition to the British Government’s austerity agenda.

Sinn Féin took a principled and determined stand to support the most vulnerable in society in opposing Tory austerity.

While other parties accepted the British Government’s mantra of austerity, Sinn Féin fought to protect those most in need.

In a series of negotiations with the British and Irish governments, the Sinn Féin negotiating team, led by Martin McGuinness and Conor Murphy, directly challenged the austerity agenda which punishes those least-well-off.

As a result, Sinn Féin secured a unique package of protections worth more than £500million to help protect those most in need.

Although the mainstream media coverage of the last Assembly mandate portrayed it as one of continual political chaos and arguments between parties, Sinn Féin managed to achieve a significant amount, with more than 80% of the Programme for Government commitments delivered.

Significantly, the Executive also stopped the introduction of water charges, ensuring that domestic users do not have to pay for water.

Sinn Féin ministers were at the heart of delivering this progressive change.

More than £1.2billion was invested in new school buildings and upgrading classroom facilities.

Educational attainment also continued to improve under Minister O’Dowd, particularly among young people from disadvantaged backgrounds, with 58% of children receiving free school meals now getting 5 GCSEs at grades A* – C, compared to 31% previously.

More pre-school places were provided and additional resources provided from breakfast and homework clubs in schools.

The Educational Maintenance Allowance (EMA), which helps young people to stay in education, was also saved from abolition by Minister O’Dowd.

The Irish-medium education sector also saw major improvements with the opening of several new bunscoileanna, a new building for Belfast’s Coláiste Feirste and the opening of Gaelcholáiste Dhoire in Dungiven.

The Mid Ulster MLA delivered the largest-ever Rural Development Programme (RDP) worth more than £500million which has led to the creation of over 1,000 jobs throughout rural areas.

The minister also led the first decentralisation of a government department, moving hundreds of jobs into rural areas. The Department of Agriculture and Rural Development headquarters is moving to a former British Army barracks site in Ballykelly while fishery and forestry offices were also decentralised.

She also successfully negotiated reforms to the Common Agricultural Policy in 2014, resulting a fairer distribution to farm payments, ensuring that hill farmers get equal treatment.

Michelle O’Neill also fought for the rights of the North’s fishing fleet, increasing quotas and safeguarding the interests of the industry by progressing the European Marine Fisheries Fund.

Farmers were also helped to develop the agriculture sector with £250million investment in the Farm Business Improvement Scheme.

Significant improvements in rural broadband provision was also rolled out alongside £10million investment in rural tourism.

Culture Minister Carál Ní Chuilín delivered major investment to the arts and sporting sectors in the North, as well as continuing to support the development of the Irish-language community.

More than £130million has been invested in sports facilities with major stadium redevelopments for rugby, soccer and the GAA.

The North Belfast MLA was the main financial backer for the successful City of Culture celebrations in Derry in 2013, investing £12.6million during the years and a further £7million for legacy projects across the north-west.

As part of Sinn Féin’s commitment to the Irish language, the Culture Minister launched the Líofa initiative to promote fluency and which now has more than 18,000 members.

The Culture Minister also protected libraries threatened with cuts as a result of the Tory austerity agenda.

Funding was also secured, with Irish Government input, for the new radiotherapy centre at Altnagelvin Hospital in Derry which will cater for patients from both sides of the Border.

There were significant initiatives aimed at developing and promoting reconciliation during the last Assembly mandate. Recognising the importance of the decade of centenaries, Martin McGuinness attended a commemoration for the centenary of the First World War at Stormont hosted by Assembly speaker Mitchel McLaughlin. Sinn Féin also made history by holding an Easter Rising commemoration in Stormont’s Long Gallery for the first time. The event was attended by Sinn Féin representatives from across Ireland, including many of the 23 newly-elected TDs.

Despite these advances, the British Government reneged on its commitments on the dealing with the legacy of the past. In the face of the repeated attempts of Secretary of State Theresa Villiers’s Tory government to cover up the actions of its armed forces, agents and their proxies in unionist death squads, Sinn Féin did secure agreement on mechanisms to deal with the past. The British Government, however, has yet to fulfil its commitments.

Personalities also changed during the course of the mandate with some famous faces leaving the political scene.

The retirement of Peter Robinson and his replacement with Arlene Foster, both as DUP leader and First Minister brought a new face to the very top of the DUP.

At times throughout his leadership Peter Robinson had a fraught relationship with some within the DUP Assembly party and MP group at Westminster and his position as leader was called into question on several occasions.

One significant indication of change at Stormont occurred when Mitchel McLaughlin was elected as Speaker of the Assembly, becoming the first republican to hold the position.

The veteran republican, who stepped down from the Assembly this year, was widely respected by all parties at Stormont for his fairness and impartiality when chairing debates in the chamber.

During his time as Speaker he also rolled out a series of initiatives aimed at making Stormont more accessible to the public.

He also pioneered a series of events to mark International Women’s Day which led to the creation of the first Women’s Caucus at the Assembly with Sinn Féin MLA.

Sinn Féin has made advances but to make further strides to defend and enhance the living standards of people across all communities, from all backgrounds and ages, and across the island, the party is seeking a strong mandate for lasting change in the Assembly elections on 5 May.