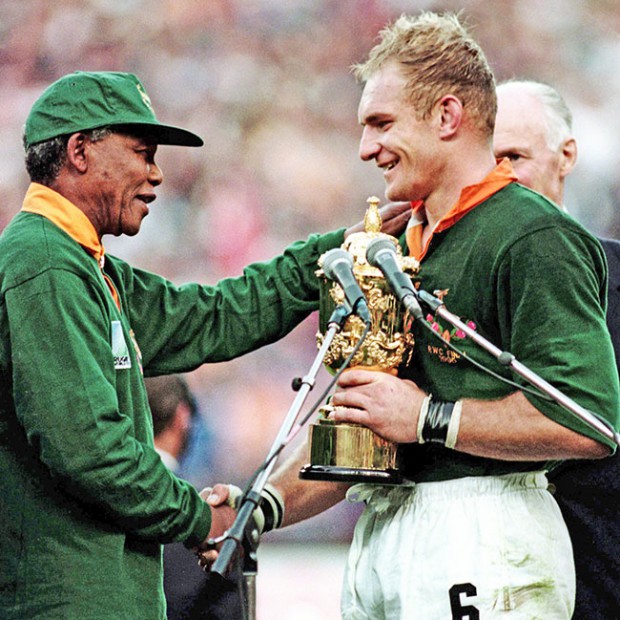 • Nelson Mandela meets the Springboks at the 1995 Rugby World Cup

Nelson Mandela planned for the Rugby World Cup of 1995 as much more than a summer spree or sporting spectacle. He strategised that reconciliation would have to be visible. It would have to be made tangible. It needed actions, not mere words

IN THE HISTORY of South Africa, Johannesburg competes for profile with the townlands and townships which encircle its urban mass. Places like Soweto, Alexandria, Rivonia, Sharpeville. Each a household name among those who stood up to the immorality and injustice of apartheid in South Africa.

Even the city’s biggest sporting venue is linked with the political transformation of the country.

When he was released from prison to lead the African National Congress in political negotiations, Nelson Mandela went to the Ellis Park Stadium in Johannesburg. A year after the first democratic elections and the post-apartheid era began, Mandela was back in Ellis Park; this time it was the venue for a sporting event – the 1995 Rugby World Cup Final.

They watched a replay of the match and spoke about their recollections. Captain of the Springboks, Francois Pienaar, remarked this was the first time he had ever watched the match. That may seem a remarkable admission. Nowadays, players routinely receive video feedback and analysis of matches. The latest software even tags individuals in games to enable them to review their individual performance across several matches. Back then, there were no DVD copies of the match tucked into the kitbag to take home when the game was over.

Yet the Springboks knew that the 1995 Rugby World Cup Final meant more than sporting glory.

Posing at the reunion for a group photograph, they stood behind the banner “Still One Team – Still One Country”. The words echoed the slogan of the era which captured what this event meant for South Africa.

Stumbling tentatively from underneath the yoke of an apartheid regime, South Africa had held its first democratic elections only a year beforehand. At that moment, the country’s most famous political prisoner became the country’s President.

His 27-year imprisonment had helped to inspire the sporting boycott which hurt the Springboks attempts to compete internationally. He had learned about the pride of his white prison warders in the green and gold colours of the national rugby team. He also witnessed the glee with which his fellow inmates on Robben Island would cheer for any defeat inflicted on the Springboks. Antagonisms evoked by apartheid had saturated sporting culture as with every other facet of society. Therefore, Nelson Mandela planned for the Rugby World Cup of 1995 as much more than a summer spree or sporting spectacle. He strategised that reconciliation would have to be visible. It would have to be made tangible. It needed actions, not mere words.

For a man who loved sport, who relished training, Mandela had a clear and strategic philosophy on sport:

Some have branded Mandela’s outreach to the Springboks and their captain, Francois Pienaar, as mere ‘political seduction’. But that denies the magnitude of what took place. As Mandela is reported to have once said: this was not a political calculation, it was a human calculation, one which had its price for Madiba as he later admitted: “My own people, they booed me when I stood before them, urging them to support the Springboks.”

What happened next has already been retold in a book by John Carlin and in the Hollywood movie Invictus (directed by Clint Eastwood). For cynics, references to book sales and box office numbers hint at merchandising and glamourising the South African struggle. With scandals like the Nkandla compound and the Marikana massacre, it’s easy to find fault-lines in post-apartheid South Africa. The context in which the 1995 Rugby World Cup was held was more unstable.

As the 2015 Rugby World Cup is played in England, it’s hard to envisage how the event could reach the zenith of 20 years ago. Yet, given the refugee crisis in the Middle East and political combustion in Ireland, a genuine ‘Mandela moment’ is something needed now more than ever.

But where is the evidence that such a thing is possible?

Perhaps in the flags carried by Ireland’s rugby team. Or in the cohesion of players, North and South, regardless of creed or background. Maybe sport offers more to peace-building and national reconciliation in Ireland then we have yet to grasp. As Archbishop Desmond Tutu, a lifelong rugby fan, said of that Mandela moment in 1995:

“The lesson is wonderfully simple and encouraging. If it happened once, it can happen again.”