The phony ‘war on unionist culture’ 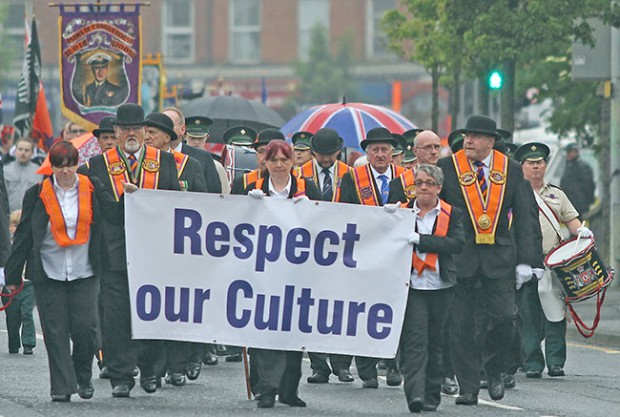 Between 2004 and 2014, some 26,000 parades by unionists, including the loyal orders, were held across the North – a huge 93% went ahead without restrictions

WRITING on news investigative website The Detail in April of this year, Steven McCaffery argued that progress in the North’s Peace Process has been delayed “by rows over what is arguably a phony culture war” with “the recurring battles over loyal order parades and around the Irish language” as good examples of this phony culture war.

Opposition to triumphalist Orange parades through or past nationalist neighbourhoods and the promotion of the Irish language are portrayed by hostile and militant unionism as just that – a cultural war waged by republicans against their unionist/British way of life.

It’s an idea that has gained currency in the unionist narrative over recent decades. It’s one echoed by unionist politicians such as the DUP’s Nelson McCausland, who reckons that republicans want to “convince unionists that they are really Irish and Gaelic”.

This is especially so in the aftermath of Belfast City Council’s decision in December 2012 to reduce the days when the Union flag would be flown on City Hall.

Responsibility for the street violence by unionists as part of the protests against the democratic decision of the council was not that of the petrol bombers who attacked party offices and homes, or the masked mobs who tried to smash their way into the City Hall chamber and clashed with police and intimidated commuters and shoppers, but the city councillors who voted to ‘tear down the flag’. (Coincidentally, unionist cheerleaders and ‘respectable’ politicians seemed largely indifferent to the fact that the majority of rioters were working-class Protestant teenagers and young adults whose limited prospects were narrowed down even further as many of them ended up with a prison record or criminal convictions.)

Victims are to blame

Media commentators employ the word ‘perception’ as they shy away from naming the beast of sectarian intolerance.

The perception of a republican threat trumps reality and unionists become victims or, in the views of some observers, reactive victims whose behaviour is triggered by (and therefore the fault of) republicans.

Writing in The Irish Times in August 2013 under the headline “Fear of cultural erosion at heart of loyalist discontent”, Patricia McCarthy and Mick Rafferty (researchers from Dublin who were based in north Belfast at the time) maintained that the ‘flag protests’ with their violence “began when Belfast City Council voted that the British flag, the essential symbol of Ulster unionism” be restricted. 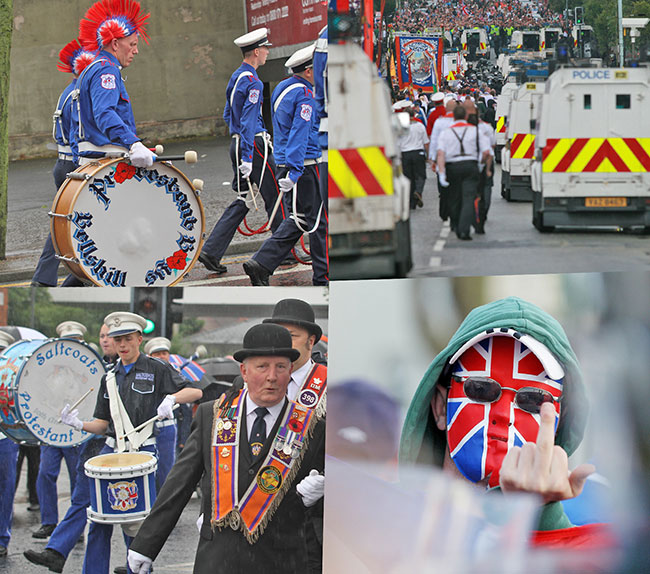 They reinforced their view that the nationalist demand for equality equates with an attack on ‘PUL culture’ when they verged on justifying the attack on then Mayor Máirtín Ó Muilleoir of Sinn Féin by loyalists when he tried to carry out an engagement in the Woodvale area of Belfast.

Astonishingly, they pointed the finger at “Sinn Féin . . . as the principal source of the erosion of their [PUL] culture” before accusing Ó Muilleoir (with more commentary than factual findings) of “delusionary arrogance” – presumably for thinking he could carry out his mayoral duties in the city?

They then conclude that the “protesters [including the attackers whose violence hospitalised Ó Muilleoir and a number of PSNI officers] were saying there will be no shared space if there is no respect for their culture”.

So what is the reality?

9 out of 10 parades have no restrictions

When we look at the facts, particularly around unionist marches, the figures published by McCaffery in The Detail show that 4,000 parades of various types took place in the North every year over the past decade with two thirds organised by the loyal orders or groups from the broad unionist tradition.

The vast majority of these parades (93%) went ahead without any restrictions placed on them.

If we take the dispute over the parade at Drumcree and the ‘Siege of Garvaghy Road’ through the mid-1990s as the high point of ‘marching season tension’, when unionist culture was allegedly under severe threat, the figures tell us that, since then, thousands of parades went ahead unhindered.

“It is also worth noting,” McCaffery points out, “that of the fraction of marches that were restricted, only a portion of those were rerouted. Restrictions are often limited to conditions such as the timing of a march or the music played.”

The wider issue for the PUL community is that they elevate the different aspects of their behaviour into the realm of culture and so argue that events such as the ‘traditional Eleventh Night bonfire’ are “cultural” and must be respected.

What exactly are we being asked to respect? 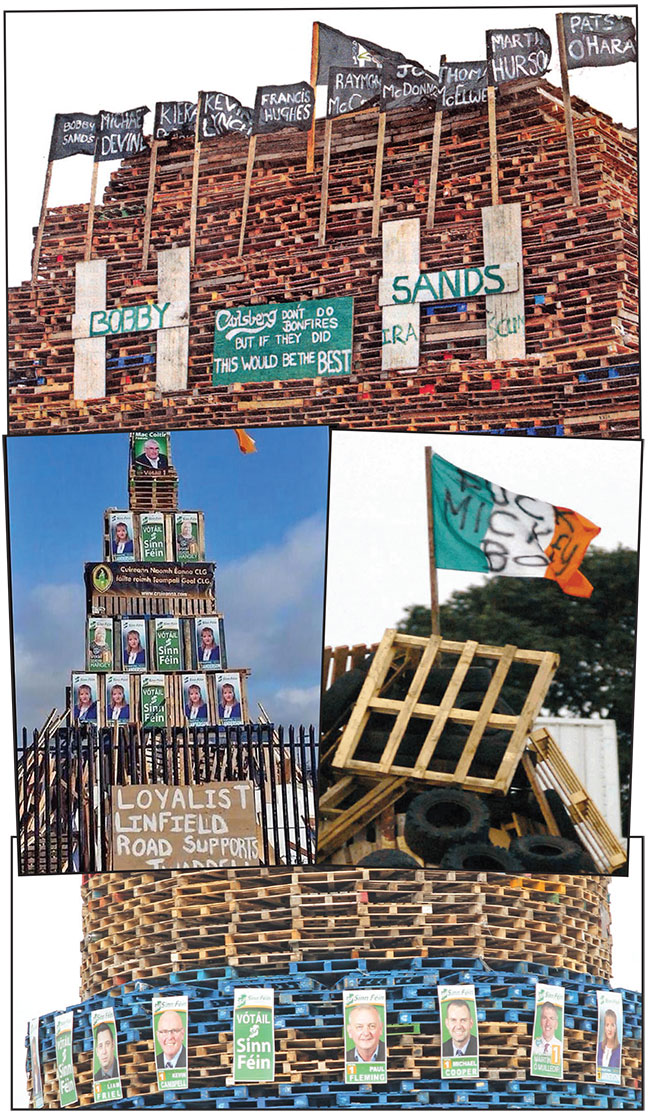 As a snapshot of the ‘phony’ culture from this year alone we saw pyres of rubbish, wooden pallets and hundreds of tyres built for the ‘celebration’. Many of these were adorned with the Irish national flag and those of Palestine. Some included Papal flags.

Election posters with the images of nationalist politicians in the main, but others such as Alliance Party figures (with Naomi Long in particular being singled out) were plastered onto these infernos.

And the most sinister message to be sent out was the burning of effigies of Gerry Adams, Martin McGuinness and Michelle Gildernew as they hung from a makeshift gallows, as well as a mock coffin with an image of Bobby Sands.

The added ingredient to this year’s ‘festivities’ was racism with the flying of Confederate flags, Zionist flags (and Nazi flags in at least one instance!) and the epitaph on the Ballycraigy, County Antrim, fire: “We’re not racist, we just hate cotton pickin’ niggers.”

Somehow, in the land of perception, we are expected to see this nihilistic behaviour as ‘the kids having a bit of fun’.

These events, remember, are the build-up to The Twelfth, which unionist leaders and the Orange Order profess is a reflection not just of their British culture but their Christian values. (If the vast majority of people in Britain see this in the same way is another matter.)

For most people it is unbelievable that spokespersons and representatives of the PUL community rather than challenge the bigotry and anti-nationalist sentiment behind these displays instead accuse their critics of denigrating their culture.

And while all this goes on, the respect they demand for their culture is not reciprocated. 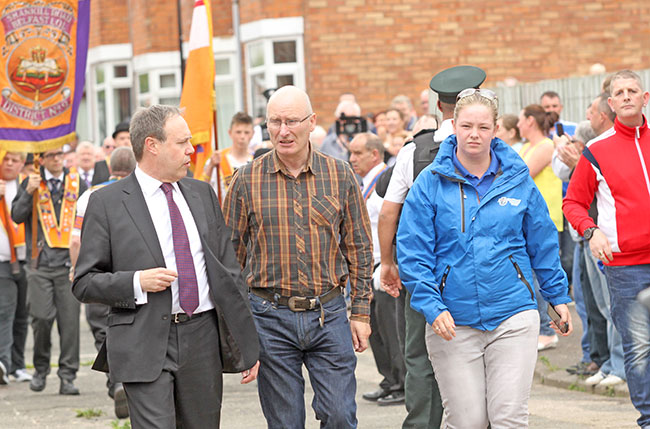 In recent years, Traditional Unionist Voice leader Jim Allister has been to the fore in attacking the GAA.

In a particularly bizarre episode, in April of last year, he called for GAA shirts to be banned from the North’s university campuses, saying that the “proliferation” of GAA tops was “creating a substantial chill factor”, especially at the University of Ulster’s Jordanstown campus.

It transpired that between the University of Ulster and Queen’s, just four complaints were recorded over a five-year period!

Unionist opposition to an Irish Language Act encapsulates the contempt they have for anything Irish while they call for recognition for Ulster Scots.

In November 2014, during the DUP’s annual conference, Gregory Campbell had the delegates laughing along with a routine that would have made Jim Davidson proud.

The Derry MLA said he would use an Irish Language Act as “toilet paper”. Producing a pot of yoghurt, he again mocked Gaeilgeóirí by repeating his puerile “curry my yoghurt” remarks made earlier in the Assembly.

While Campbell plays the clown prince to the DUP gallery, his party colleague Nelson McCausland adds a far more sinister twist to the DUP’s anti-Irish campaign.

In February, the Orange Order member accused Sinn Féin of “stepping up its cultural war” after Sinn Féin Education Minister John O’Dowd proposed a scheme to promote Irish in schools.

McCausland, an Ulster-Scots enthusiast, then said republicans have “weaponised” the language with “Sinn Féin placing more emphasis on their cultural war and the Irish language is the main weapon in their armoury”.

If we are to make the progress we want and need to make in the “peace process” rather than focus on a “phony culture war” we need the PUL community to address their issues around bonfires and the small number of marches in contentious areas that bring trouble onto the streets, including the Orange Order not turning a blind eye to bands on their parades pounding out their thinly-disguised sectarianism by disingenuously claiming they are playing the Beach Boys number rather than the anti-Irish Famine Song that is sung to the same tune.

And if unionists and the Orange Order embraced equality and recognised the rights of Irish speakers by supporting an Irish Language Act, we would be off to a good start.