‘Business as usual’ at Stormont Unionists fuel another crisis 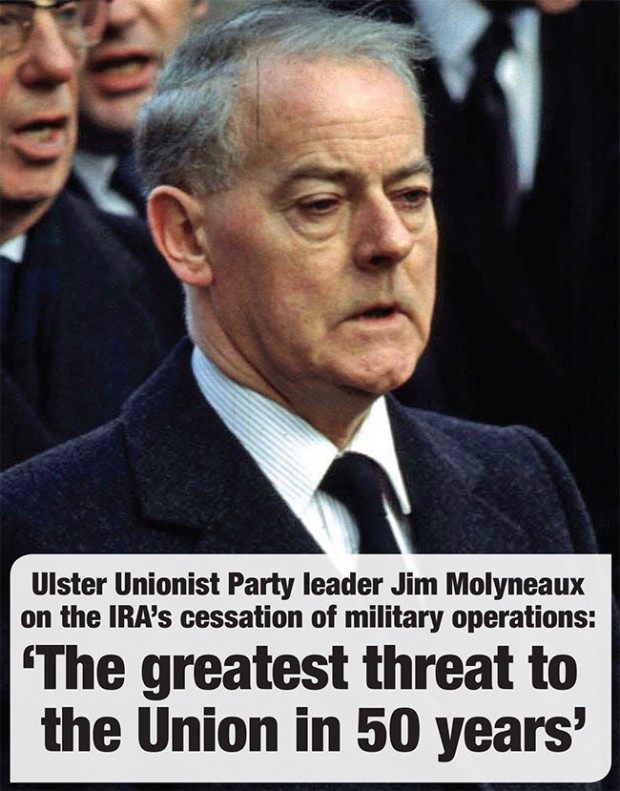 Ulster Unionist Party leader Jim Molyneaux on the IRA’s cessation of military operations: ‘The greatest threat to the Union in 50 years’

WHEN, in 1994, the then leader of the Ulster Unionist Party, Jim Molyneaux responded to the news of the IRA’s cessation of military operations with the remark that the IRA decision “is the greatest threat to the Union in 50 years” and one of the most destabilising events since partition he exposed unionism’s split personality.

On the one hand, unionism needed the IRA bogeyman to deflect from the political failure of 50 years of Stormont misrule while, on the other hand, the unionist party that could convince their electorate that they had the toughest line on republicans would be seen as top dog.

Which is precisely what happened in the late 1960s in response to the Civil Rights campaign.

The Unionist Party Government at Stormont presented it as a republican conspiracy to undermine the state and ‘The Great Wrecker’ Ian Paisley attacked every unionist leader as “soft” until he claimed the summit of unionism when the Ulster Unionist Party imploded in the 2005 Westminster election and Paisley’s Democratic Unionist Party became the top dog.

The killing of Kevin McGuigan in the Short Strand area of east Belfast on 12 August, just days after the largely unknown Action Against Drugs group warned it was “investigating” the shooting of former IRA activist Jock Davison and vowed to “execute” the killers, provided the main unionist parties with a pretext on which to steal a march on each other in advance of next year’s scheduled Assembly elections.

The opportunity was gifted them in the confused assessment of PSNI Detective Superintendent Kevin Geddes that “IRA members” were involved in the killing of the Short Strand man in revenge for the Davison killing in May. 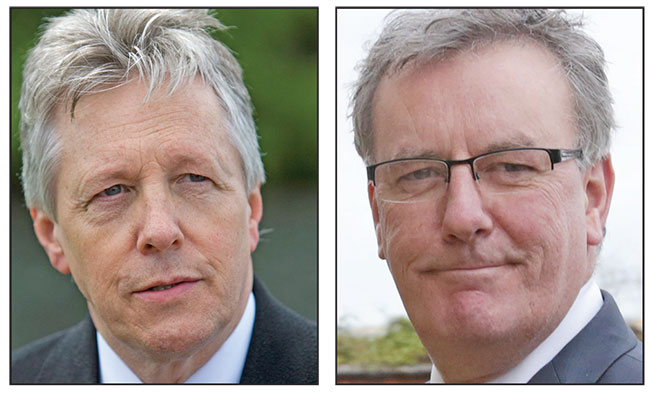 Geddes said in his press conference:

“Action Against Drugs are a group of individuals who are criminals, violent dissident republicans and former members of the Provisional IRA . . .

“They are dangerous, they are involved in violence and extortion of the nationalist and republican communities and they have a criminal agenda . . .

“My assessment is that this is a separate group from the Provisional IRA.” (My emphasis.)

It is also worth noting that the media, North and South, and the many other politicians and commentators who are citing, unquestioningly, the PSNI’s pronouncements are the same people who over the decades accepted as fact the RUC and British Army denials of collusion. ‘Republican propaganda,’ they said. The evidence uncovered since proves otherwise.

So what does this latest ‘crisis’ tell us about the state of unionist politics in the North at the minute, particularly in light of the Ulster Unionist Party’s walk-out from the North’s Executive?

But listening to Ulster Unionist Party leader Mike Nesbitt when welcoming ex-DUP councillors Jenny and John Palmer into his party, he listed the gains his party made in the last couple of elections and clearly wants to build on that at the expense of his rival.

So it would seem that his more stringent response to the speculation around the McGuigan killing sees him playing to the hardliners.

And this is all being played out against the stand-off over the welfare cuts and the Stormont House Agreement and the unionist refusal to confront the Tory Government’s austerity agenda.

If the DUP and the Ulster Unionist Party get into a race to the bottom and British Premier David Cameron suspends the Assembly, then it may be a good day for them but not for the people on whom the cuts will be inflicted – unionist as well as nationalist.

DEVOLUTION OF POWER and elections to a legislative Assembly were agreed in the Good Friday Agreement signed in 1998 yet it wasn’t until December 1999 that the Executive was formed. The unionists, in a sign of what was to come, had stalled the process, citing the need for “IRA decommissioning”.

February 2000 – British Secretary of State Peter Mandelson suspends the Assembly. Gerry Adams accuses him of doing so to “save David Trimble”, who is coming under pressure from within his own party and the DUP.

October 2002 – Against a backdrop of unionist turmoil and Trimble’s position becoming more precarious, the PSNI carries out raids on Sinn Féin offices in Stormont, accusing the party of involvement in an intelligence-gathering operation. British Secretary of State imposes direct rule on 14 October.

February 2004 – The abduction of west Belfast man Bobby Tohill sparks a political and media reaction that becomes all too familiar. Chief Constable Hugh Orde accuses the IRA of involvement and David Trimble walks away from the ongoing political review as he attempts to force British Prime Minister Tony Blair’s government to exclude Sinn Féin.

December 2004 – At the end of a year that saw intense negotiations between the Sinn Féin leadership with the British and Dublin governments as well as the DUP, the Northern Bank in Belfast city centre is robbed. Again, PSNI Chief Constable Hugh Orde points the finger at the IRA. The IRA denies involvement. The robbery is described as a major blow to the Peace Process.

January 2005 – The difficulties for the Peace Process are compounded when, on 30 January, Short Strand man Robert McCartney is stabbed to death during a pub brawl involving republicans.

In a statement, the IRA says: “Predictably, our opponents and enemies who have their own agendas have used this brutal killing to attack republicans and to advance their own narrow political interests.”

July 2005 – IRA calls an end to the armed struggle and encourages Volunteers to pursue republican goals through peaceful and democratic means.

September 2005 – Arms decommissioning body head General John de Chastelain says the IRA has put all of its weapons beyond use. It would be another nearly two years of unionist bad faith and prevarication before the Assembly would be reinstated.

December 2005 – All charges against people accused of involvement in the alleged ‘Stormont Spy Ring’ are dropped.

May 2007 – Direct rule, which had been in place since 2002, ends and DUP leader Ian Paisley and Sinn Féin’s Martin McGuinness being sworn in as First and Deputy First Ministers and take their pledges of office at Stormont.

March 2008 – Ian Paisley announces his resignation as First Minister and leader of the DUP.

The McGuinness/Paisley relationship, against all predictions, proved to more stable and productive earning them the “chuckle brothers” epitaph. With Robinson as First Minister, perceived as a strong leader and strategic thinker, it was believed the progress of the past two years would be built on. Instead, we got more chaos.

January 2010 – The revelation that Peter Robinson’s wife, Iris, had an affair with a 19-year-old businessman (for whom she solicited £50,000 from DUP supporters) shook Robinson personally. However, it was revelations about the couple’s financial arrangements, earning between them over £500,000 per annum and employing their children as assistants and researchers, that undermined him politically. Robinson stood down, temporarily, as First Minster while claims he knew of his wife’s financial dealings were investigated by a Stormont Agreement. He was cleared of any wrongdoing.

December 2012 – The decision of Belfast City Council to reduce the flying of the Union flag on 17 designated days (similar to many councils in England) leads to mob rule on the streets. Peter Robinson, as First Minster, and the other unionist leaders refuse to confront the rioters who are being supported if not organised by the UVF.

March 2013 – Ironically, the DUP engages in a row with the North’s judiciary, accusing the judges of bias towards people charged with offences relating to so-called ‘flag protests’.

August 2013 – In his infamous ‘Letter from America’, Peter Robinson reneges on a deal to develop the Long Kesh site as he buckles in face of reaction fuelled by DUP defector Jim Allister’s  hardline Traditional Unionist Voice.

January 2014 – With the Ulster Unionist Party’s rejection of the Haass proposals (negotiated through the Christmas period) it becomes clear the extremes of unionism are dictating the political agenda. The DUP’s Jeffrey Donaldson admitted to briefing Willie Frazer during the talks process while Ulster Unionist Party members were keeping ‘flag protester’ Jamie Bryson up to date with developments.

Bryson later claimed fear of a “loyalist backlash” ensured the failure of the Haass process and said “it was a victory for loyalism”.

February 2014 – The acquittal of Donegal man John Downey on charges relating to the Hyde Park bombing in London in 1982 when his legal team produced his so-called ‘On the Run’ letter provoked a feeding frenzy within unionism as all parties struggled to outflank each other. Robinson threatened to resign and collapse the Executive. He withdrew his threat after David Cameron offered him the ‘fig leaf’ of an inquiry that fell well short of what he originally demanded.

July 2014 – Unionists again pander to the bully boys of the Orange Order after Twelfth parade is barred going past Ardoyne. They walk away from talks aimed at reviving the Haass process and in a show of unity join with representatives of the UVF aligned PUP and the UDA linked UPRG calling for a “graduated response” that never materialised.

October 2014 – DUP reneges on an agreement to support Mitchell McLaughlin as Speaker in the Assembly.

February 2015 – The scene was set for this present crisis when DSD Minster Mervyn Storey supplied Sinn Féin with his draft legislation for the Welfare Bill which excluded protections for “future” claimants. As this went against the Stormont House Agreement Sinn Féin refused to support the bill.