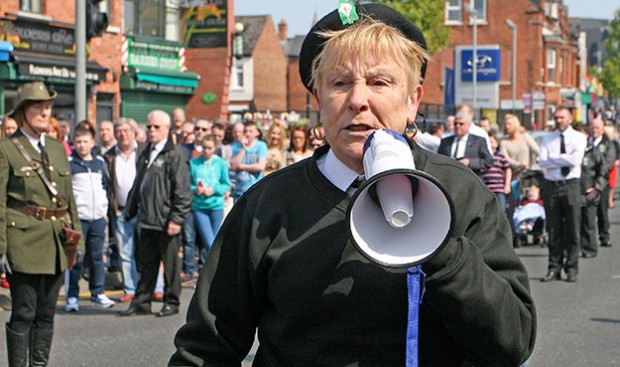 Bridie was a longstanding Sinn Féin and community activist. She worked tirelessly and fearlessly during the H-Block/Armagh campaign and the hunger strikes, and took part in countless election campaigns.

THERE was widespread shock at news of the sudden death of ex-Armagh prisoner and Sinn Féin activist Bridie McMahon on holiday in Portugal with family and friends in August.

The Felons’ Club immediately tweeted their “total shock” and said:

“Legend is overused – Bridie is befitting of the title. A lifelong republican, when you saw Bridie you knew you were sound and safe.”

Sinn Féin President and Louth TD Gerry Adams, former MP for west Belfast, said he had known Bridie for over 40 years and his wife, Colette, knew her even longer than that.

As a republican political prisoner in Armagh in the early 1970s she was, as one comrade said, “the life and soul of the place”. For a time she was with Máire Drumm and in subsequent years one of her party pieces was to recite the famous speech by Máire which saw her sentenced to Armagh Prison.

She was also a natural and gifted actor. Over the years she was a crucial part of Féile an Phobail and participated in many plays, including Just a Prisoner’s Wife; Murphy’s Law; A Mother’s Heart; Binlids and Forced Upon Us.

Gerry Adams shared fond memories of helping to arrange for Bridie and the Binlids cast and crew to go to New York to put on the play. “It was a great success,” he said, adding: “While out with a meal along with her friends in Portugal, she was approached by a couple from Belfast who recognised her as the character ‘Ma Maguire’ in the BBC series Pulling Moves. Bridie enjoyed the craic.”

Bridie was a longstanding Sinn Féin and community activist. She worked tirelessly and fearlessly during the H-Block/Armagh campaign and the hunger strikes, and took part in countless election campaigns.

“Her loss for her friends and comrades is immeasurable,” Gerry Adams said. “Bridie was an example of the total activist. She was immersed in her determination to help her neighbours and through her activism and acting to promote freedom and justice and equality. Over five decades she made a significant contribution to the community of west Belfast.

“I want to extend on my own behalf and that of Sinn Féin our deep appreciation of Bridie, our regret at her death, and our deepest sympathy and condolences to her family and friends.”