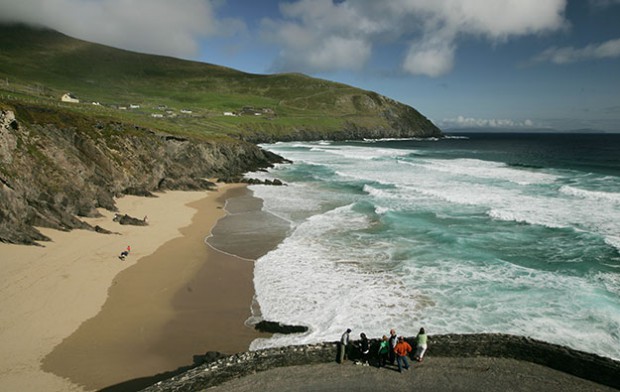 DRIVING the scary descent from the Connor Pass is a Dantesque scenario for travellers who have never witnessed such a panoramic vista – mountains, fields and sands morphing into a bluegreen chimera that holds the past and present in its fiery breath.

An earlier remark comes to mind. “Isn’t Castlegregory where that Yank set her book all those years ago?” Extinguish that thought. Modern-day Castlegregory is a place of artists and craft workers, and, further along the promontory, a place to rest the head and eat good food after a hard day cycling, hiking, swimming, surfing, walking and playing. Not a picture postcard in sight, social media projects live images of the blue-sky day around the globe. Even the wind has calmed. It is not even raining.

Today we are passing by, across the Dingle Peninsula, northwards. Our destination is Loop Head, across the wide Shannon at Tarbet to Killimer and around to Kilkee, to take the narrow coastal road past Castle Point to the pier at Carrigaholt. A journey of just under four hours, avoiding Limerick, where the past remains sacrosanct.

Whatever the people of Kerry and Clare were in days when foreign anthropologists and native sociologists couldn’t decide the who, what or why of the people and their place, there is no argument now. Welcome to the pleasure dome.

Writing more than two thousand years ago, Megalopolis-born historian Polybius lamented the fate of those who sought avarice and glory to the detriment of society:

“They are so fond of wine that they cannot even get to sleep without drugging themselves with drink, and they are so addicted to sex and its attendant derangement that they have been responsible for homes and cities being razed to the ground and have brought personal disgrace upon themselves by the manner of their deaths.”

The Greek spoke about Roman commanders who frequently lost the run of themselves, but his words hold a metaphorical meaning and a warning, especially today, not least because civilised Roman society was eventually crushed from within and without by uncivilised barbarians who cared only about themselves.

Have the good people of Kerry and Clare exorcised their own demons, banished sin and embraced future promise, and learned from the past? It would seem that way. There is a Celtic pragmaticism about Kerry and Clare, and the people (natives, blow-ins and foreigners) have embraced the Celtic ways that celebrate life.

The same can be said of the people of Donegal. In Kerry, the mountains meet the sea, in Clare the road and the sky collide, but in Donegal everything comes together in an elemental fusing of sound and vision. This is the past, present and future. It is no wonder Donegal is seen as the land of the friendly people.

Fáilte Ireland call it “The Wild Atlantic Way”, signposts that tell where you are. And where is that exactly? We have been travelling the coastal roads from Clonakilty, where we think the Wild Atlantic Way begins, to Derry, where we think it ends, this summer in search of people, place and produce (a story for another day), and it is very interesting learning what the local people think of this initiative.

“What is it exactly?” a Clare chef asks, answering his own question. “A scheme to make money, they no sooner had the signs up and we had people ringing and calling looking for money for this and that, like we have no choice.”

For many, though, it is a lifeline and the owners of businesses along the Wild Atlantic Way have benefited from the increased numbers of travellers and tourists. But what are they looking for? What have they come to see?

“It’s unique, that’s that it is,” says a Donegal farmer, staring up at the Derryveagh mountains, which in this instant are off the beaten track. “They Googled a map of Ireland. They didn’t come and ask the people where they should put the signs.”

This man’s complaint is repeated along the coastal route by people on roads that are clearly next to the Atlantic and don’t have any signs. In Limerick, where there are no Wild Atlantic Way signs to be seen for love nor money, they are not amused. The Wild Atlantic Way crosses the Shannon at Tarbert, and doesn’t go anywhere near Limerick City. 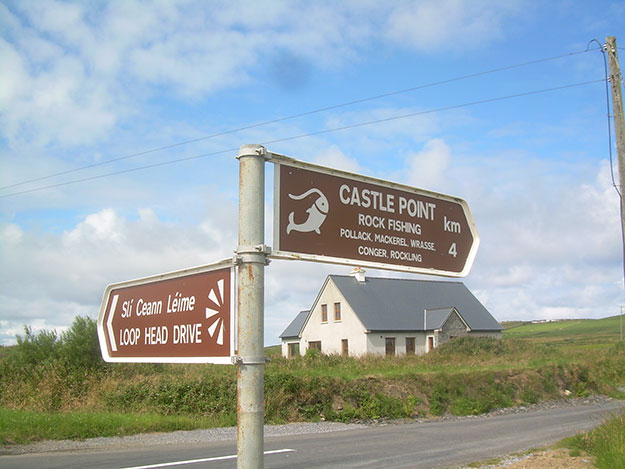 • A rare blue sky day in the West of Ireland

In Carrigaholt, on Loop Head, they are delighted with the Wild Atlantic Way. After the N67 veers to the west after Moyasta, the signpost is clear in the townland of Garruan. The hire car we have been following since Tralee turns left into Loop Head. We continue onto Kilkee, and take the scary narrow section of the Wild Atlantic Way around and across the Loop down into Carrigaholt. It is not possible to get any closer to the Atlantic on this road. For once the sea is not wild but the view is breathtaking.

The inclement weather has affected trade along the Wild Atlantic Way, especially in the areas where it hugs the coast like a long-lost friend, and businesses are suffering. “People don’t come out when it is like this,” a Donegal publican says, indicating the soft day. “The summer has been bad.”

It has been said many times, mostly by foreigners, that Ireland and its people are shaped by the weather, that our moods are related to brooding skies. Others, including that Yank who spent a year in An Clochán on the Dingle Peninsula, suggested that madness was a peculiarly Irish thing, especially in the places where the people lived off the land and the sea in some of the places where the Wild Atlantic Way goes today. 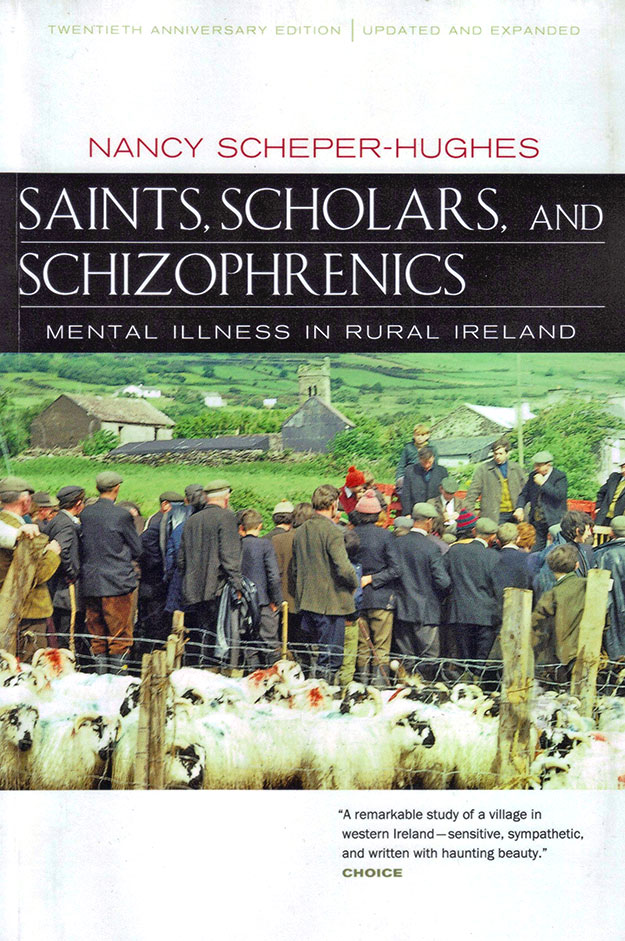 American Nancy Scheper-Hughes arrived in the peninsula in 1974 at a time when anthropologists from England, France and the USA decided to study the lost peoples of the world before they were lost forever. The world was clearly changing and the time had come to record the lives of those who were anachronistically out of tune with modern civilisation.

Deliverance, John Boorman’s cinematic adaptation of James Dickey’s poetic novel, was almost two years old when Scheper-Hughes arrived in An Clochán. The American wilderness was fast disappearing and with it went the remnants of people whose lives had not changed for centuries. The film is remembered for its iconic music, the duelling banjos that launched a whole new musical genre known as Americana.

Scheper-Hughes was accused of leaving out this aspect of Irish culture in her study, kind of ironic when you consider how Americans came to embrace Irish dance culture and still pay homage to traditional Irish music, always an attraction along the Wild Atlantic Way.

“You said nothing about our fine musicians and poets, and our step dancers who move through the air with the grace of a silk thread,” an An Clochán native told her when she revisited the place in June 1999. “And we are not a backwater today.”

Not a bit of it. The music pubs, from Dingle to Doolin, are packed to the rafters with tourists every summer. Never mind the weather, we have song and dance to enliven the spirits. “I don’t like it when people give me cards all the time,” says a Doolin barman. “Cash is better.” 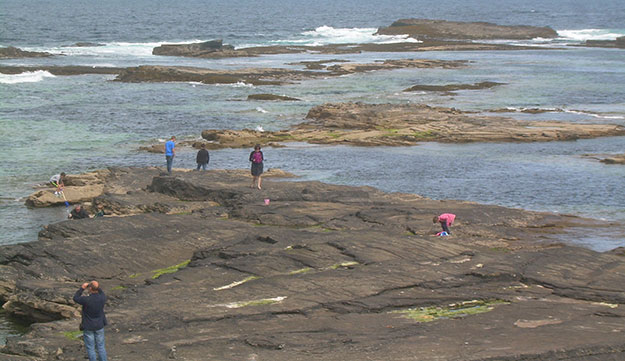 So it is. And the lack of it, to improve the infrastructure of the West, remains, as it did when Scheper-Hughes and her like visited the West in the 1970s. “Our Road is a Mess” screams the sign on the verge of the N86.

In fact it might be argued that much of the Wild Atlantic Way is a mess.

Right now these coastal roads – the N71 from Cork to Kerry, the N70 that rings Kerry, the N86, the N67 through Clare (the R477 through Fanore into Ballyvaughan is a better road), the N59 in north Connemara and west Mayo – need a lot of work, or need replacing if the Wild Atlantic Way is to continue to receive all this attention.

“They are slackers, that’s what they are,” says a Galway fisherman about the bureaucrats and politicians “up in Dublin”, repeating that often heard phrase. “Sure, what do they care about us? They just want to make money out of us and give nothing back.”

As for the Yank’s assumption that Ireland is populated with more than its fair share of schizophrenic people, that is still debatable and continues to be controversial, with wildly diverging opinions. A healthcare professional in the Galway Regional said, several years ago, that Ireland’s adoption of the American model of treating mental illness was a major problem. 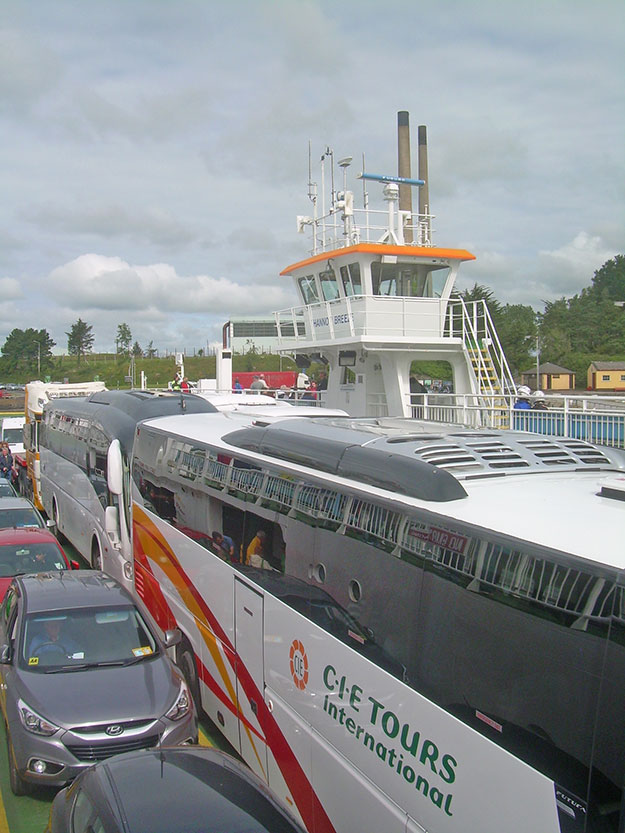 •  The Wild Atlantic Way crosses the Shannon at Tarbet and Killimer

The real issue, for those who live in the West, is the lack of respect or the lack of credit Scheper-Hughes was accused of not giving the people of An Clochán. There is, of course, a dichotomy. Not everyone wants to live in the fast lanes of modern society. Some prefer country roads and a slower pace of life.

The Wild Atlantic Way is a great idea and there is no argument about the extra jobs it brings, but it is not enough.

Family farms are almost gone, in-shore fishing is dying a slow death, and the tourist season eschews the dark days of November through to the middle of March, when everything and everyone becomes somnolent.

The West is wild and windy during those days, worse enough to drive any sane person into the depths of despair and depression. At least these days it doesn’t rain so much in the winter months.