GLEN BARR – senior political spokesperson for the Ulster Defence Association (1973-1976 and 1977-1981), Chair of Ulster Workers’ Council strike in 1974, which brought down the power-sharing Executive led by Brian Faulkner – writes for An Phoblacht.

IN 1973 I made what was referred to as the ”First Ulster nationalist” speech in Stormont where I asked if it was possible for us to build a new Northern Ireland which was not a Protestant state for a Protestant people nor a stepping stone to a united Ireland.

In 1974, following the Ulster Workers’ Council strike, the loyalist paramilitaries held a three-day conference to discuss their options.

I had resigned as senior political spokesman for the Ulster Defence Association in 1976 after they withdrew their support for voluntary coalition but under the leadership of Andy Tyrie, who was also thinking ‘outside the box’ and supported my work. He asked me if I would come back and put together a new political policy for the organisation based on the independence idea.

After a year of development, Beyond the Religious Divide was presented to every member of the UDA’s 40,000 members and it received their overwhelming approval.

Unfortunately, our ‘respectable’ loyalist politicians saw to it that the new thinking was never going to be allowed to be taken seriously and threaten their stranglehold over the loyalist people. The same exists within the nationalist community, where nationalism will not tolerate those from their community who think outside the ‘united Ireland box’.

I wish every person on this island could be taken to the Flanders battlefields with its countless headstones and see what is the alternative to dialogue.

They could visit the Island of Ireland Peace Park and Memorial Round Tower dedicated by HM The Queen, President McAleese and ‘The King of the Belgians’ in memory of all those from the island of Ireland who gave their lives. This especially includes those nationalists from the 16th Irish Division and unionists from the 36th Ulster Division who fought and died together at the battle of Messines Ridge on 7 June 1917.

Following the dedication of the Island of Ireland Peace Park on 11 November 1998, we travelled to Messines on 7 June each year and carried the flags or all the nations who fought at the Battle of Messines – the Belgian, New Zealand, Australian, French, Canadian, German, and Union flag. And the Irish Tricolour. Historians have commented that there was no Irish Tricolour there in 1917 but I have insisted that it is carried in memory of all those from the nationalist community who would have regarded the Irish Tricolour as their national flag.

Since 2002 we have held an annual parade to the Cenotaph in Londonderry/Derry on the Sunday prior to 7 June. 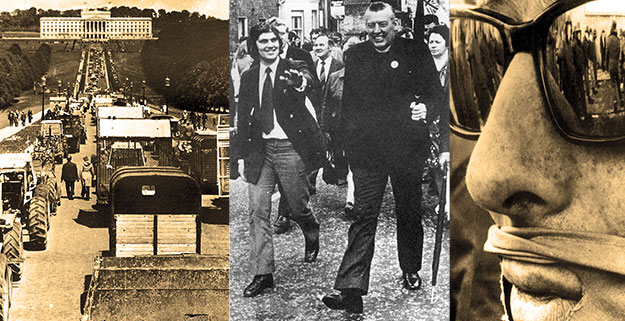 Each year we have been joined by representatives from loyalist and republican organisations and political parties, “Friends of Messines” from Donegal, Dublin and throughout Northern Ireland and the Republic of Ireland. This year was a special event when it was attended by the Sinn Féin Speaker of the NI Assembly, Mitchel McLaughlin, and the Sinn Féin Mayor of the new ‘super council’ of Derry & Strabane, Elisha McCallion, who laid laurel wreaths. Also present were the two Deputy Lord Lieutenants of the City of Londonderry, who laid traditional poppy wreaths, and representatives from the residents of the Bogside and Creggan, who laid a beautiful floral arrangement.

We believe that it is not our mission to change people’s politics or religion but to create a society in which we are all equal and that all men and women have a basic right to be treated in a fair and equitable manner.

All of this means that when we claim these rights for ourselves we must also defend those rights for others. The whole social fabric of our society is based on our ability to accept difference. This can only be achieved when people have confidence in themselves and their beliefs and free from the fear of those beliefs being diluted in a multicultural society.

Culture should not be seen as a prerequisite to community or national acceptance. Unfortunately, they have become synonymous in Northern Ireland and it is important therefore to ensure that culture is an experience to be shared and enjoyed.

Relationships are built on respect and trust.