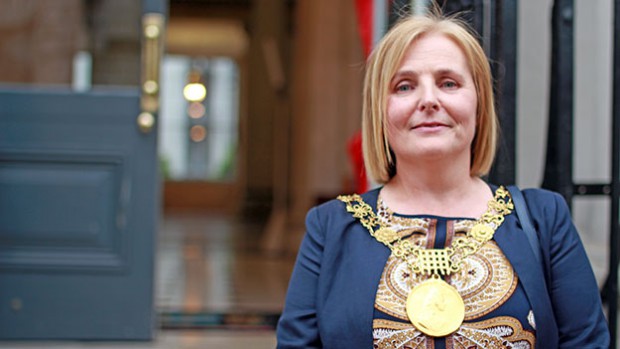 ‘I’m a republican and I don’t make any apologies for that. It’s part of who I am. I wasn’t indoctrinated – it came to me naturally. Republicansm and equality are inextricably linked – you can’t be one without the other’

ON 30 JUNE, Críona Ní Dhálaigh became the first-ever Sinn Féin ‘Lord Mayor’ of Dublin City to take office (Tom Kelly was the first for Sinn Féin, elected on 30 January 1920, but he was interned in England). However, Críona won’t be using that title.

“I am much more comfortable using the title ‘Ard Mhéara’ rather than ‘Lord Mayor’. For one thing, Ard Mhéara has no gender; Lord Mayor does because when the title was created they never envisaged a woman would hold the position. In fact, out of more than 300 mayors of the city in its history, I’m only the eighth woman to hold the post.”

Críona grew up in a working-class family in the area known as the ‘lower end’ of Crumlin, near Dolphin’s Barn, in the south inner city.

“It was a fantastic childhood,” she tells An Phoblacht. “As a child you were kind of oblivious to what was going on. There was a lot of poverty there but in the 1980s, doing my Leaving Cert, I became very aware of the drugs epidemic. My father, Seán, would’ve patrolled the top end of our street with other neighbours to try and stop drug dealers coming into the area.”

She also became aware of the huge social divisions that existed in Dublin.

“Because I spoke Irish I went to a Gaelscoil. There weren’t many around at that time so I had to  go all the way over to Booterstown. It was like a different planet. I remember getting dropped home by one of my classmate’s fathers and when we got to the top of my street he saw the barricade by the anti-drugs pickets. The men were there with braziers going to keep them warm and he started having a conversation with my father, asking what was going on. That was probably the closest he got to the scourge of drugs as it really was concentrated in working-class neighbourhoods.” 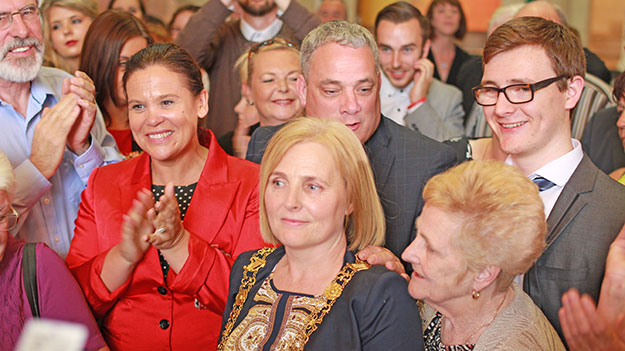 Críona says her father had an enormous influence on her:

Looking back she says the annual Wolfe Tone Commemoration at Bodenstown was something she looked forward to every year. She also remembers attending the funerals of Hunger Strikers (although she couldn’t go to them all as her school complained that she was missing too many days from classes) and Easter commemorations.

“I’m a republican and I don’t make any apologies for that. It’s part of who I am. I wasn’t indoctrinated – it came to me naturally. Republicansm and equality are inextricably linked – you can’t be one without the other.”

“My father knew republicanism wasn’t just about the Six Counties. It was about supporting the struggle against apartheid in South Africa. It was about marching to protect Viking Dublin at Wood Quay – which is ironic as now I’m in there more than ever [the new Dublin City Council offices were built on the site]. I don’t know if he’d have been too happy with me about that,” she laughs.

“It was about campaigning for Irish-language rights and involvement in trade unionism, rights for workers and supporting the striking miners in England and Wales.”

Another reason she is using the title Ard Mhéara is because she wants to popularise and normalise the use of the Irish language in Dublin.

“I want to make the language more visible and more normal in everyday Dubliners’ lives.

“I’m really supportive of a proposal by Conradh na Gaeilge to have a Gaeltacht Quarter based around Harcourt Street that would facilitate Irish speakers, those trying to learn or relearn the language.

“Growing up as an Irish speaker in a working-class community at that time was very lonely. It’s completely changed now – and there is at least ten kids on my street going to Gaelscoileanna. Many of them are the children or grandchildren of my friends who admired the fact that I went to an Irish-language school and were upset they never got that opportunity. They were determined their children would get the opportunity that they didn’t. I want to see a time when kids leave a Gaelscoil that Irish won’t stop at the school gate but will be visible all around them in the city.” 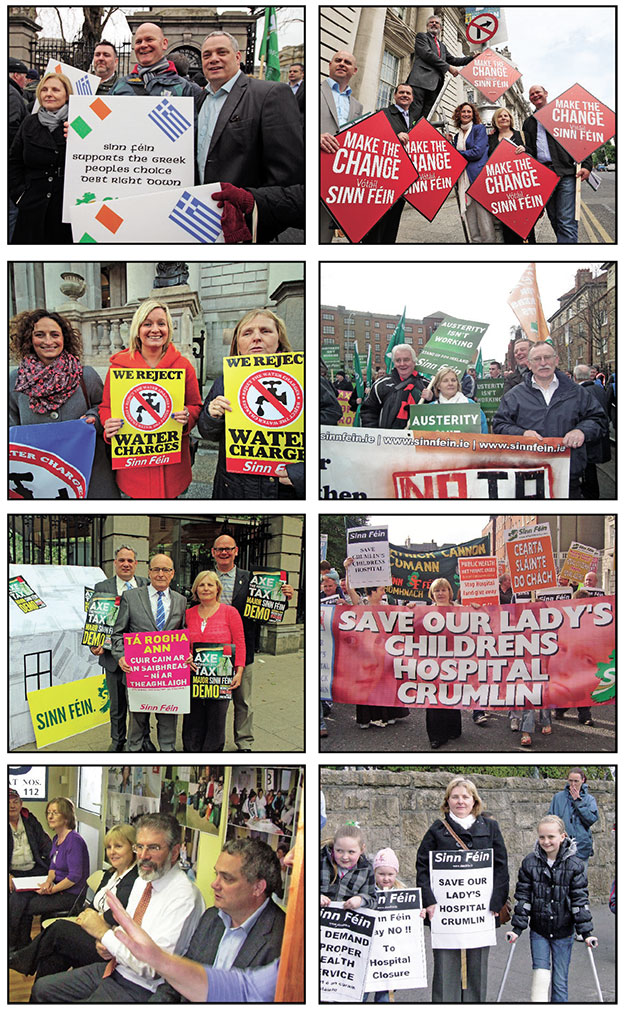 Pointing to places like Bilbao and Barcelona, where the Basque and Catalan languages are widely spoken, Críona says she’d love to see a time when Dublin was like that too.

“I know it’s not going to happen by the end of my year as Ard Mhéara but if I could use my term to get the ball rolling and support for the Irish-language organisations then I’ll be very happy.”

When Críona was elected, Fine Gael and Fianna Fáil – with the willing compliance of the Irish Independent group – tried to create controversy by claiming Sinn Féin would use her position as Mayor in 2016 to “hijack” the commemorations for the centenary of the Easter Rising.

“I’m blue in the face telling them that we’ve no intention of doing that. We don’t need to. We in Sinn Féin have actualy marked and commemorated the Easter Rising every year – so how could we ‘hijack’ it?

“We have the relatives of 1916 veterans organising events, community groups, local historical societies and youth clubs have all been getting involved and the council has provided funding for it.”

She says cities across the world where there is an Irish diaspora will celebrate the centenary.

Moving on to other key issues, Críona tells An Phoblacht that tackling the housing crisis facing the city is of the utmost importance.

The issue of homelesseess in Dublin is now at crisis levels with 564 families (which includes 1,185 children) homeless every night in Dublin. Three quarters of these are staying in hotels with the rest in emergency homeless accommodation or shelters.

“It’s just totally unacceptable,” says Críona. “A century after the Great Lockout and the Easter Rising there is just no way we can stand over this. The people in the placement services and the staff in the Council are completely overstretched and under-resourced. We cannot blame them – the system is what is at fault. The staff are doing their best.” 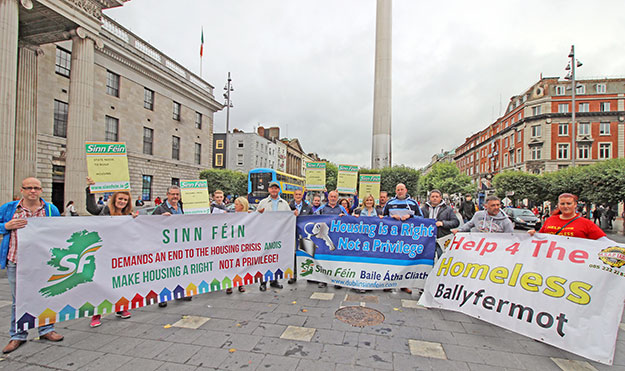 In August, Taoiseach Enda Kenny rejected any suggestion that the Fine Gael/Labour Government needed to do more, claiming adequate funding had already been provided to local authorities to deal with the issue.

“The Government has not addressed the homeless crisis at all,” Críona says, clearly angry. “This did not happen overnight. Government ministers were repeatedly warned about this for years by councillors here in Dublin because of the consistent under-funding of local authorities when it comes to housing.

“We have been saying all along that this would turn into an emergency and that is exactly what has happened in Dublin City.

“In the council we have an €18million deficit in the homeless funding. We need to fund local authorities adequately so we can start building social housing again.”

She says the funding gap is down to a lack of political will. Críona is critical of Environment Minister Alan Kelly for his apparent disinterest in dealing with the issue. She says that despite asking him since her inauguration in June for an urgent meeting to deal with the crisis, he only confirmed at the end of August that he would meet the council’s all-party housing group in September.

“I’ve been asking week-in, week-out and I was fobbed off for months,” she tells An Phoblacht.

“The solution is to provide housing, to boost homelessness funding, and to tackle unaffordable rents. The Government refuses to do any of these things and that is why we have this crisis on our hands, and why it’s getting worse by the day.

“There are 22,000 people waiting to be housed in Dublin City alone – and many more in Dublin’s other three council areas. Consecutive Government’s exacerbated the crisis.”

She asks how Dublin can portray itself as a leading global city if it cannot even house its own people.

“What’s different with the housing crisis now is that it’s whole families who are presenting as homeless; before this it was mainly single men, many with addiction problems or mental health issuess, and occasionally women facing domestic violence. Now it is entire families where the parent or parents have jobs but cannot pay the exorbitant rents being demanded in Dublin.”

She says there is no quick-fix solution to the problem.

“Supply of social housing is going to take time. So in the short-term we need to look at other options to mitigate the crisis. We need rent certainty. If we don’t address it then rents will continue to rise. Something has to be done.”