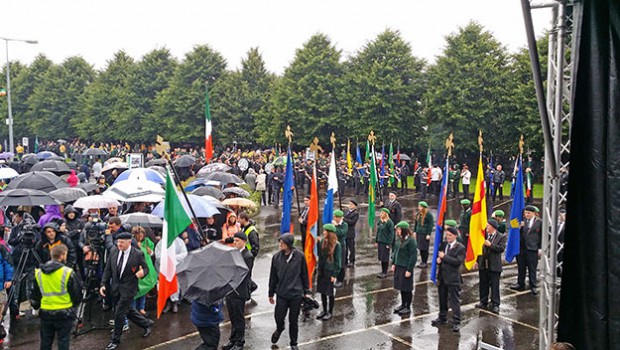 Let me be very clear. The killings of Jock Davison and of Kevin McGuigan were wrong. Those involved do not represent republicanism. They are not the IRA. The IRA has gone away’ – Gerry Adams

TORRENTIAL RAIN over Dundalk, County Louth, on the day of the National Hunger Strike Commemoration eased just enough for the thousands upon thousands of marchers from the four corners of Ireland and beyond (accompanied by many bands from Ireland and Scotland) to parade their long way up the Newry Road, snaking through the Border town centre to rally close to The Square before the heavens opened up again.

Stoically, the marchers  withstood the downpours to respectfully listen to a moving programme of tributes to the Hunger Strikers, their families and the communities throughout Ireland who supported the prisoners’ struggle for the restoration of political status in Long Kesh, Armagh and England in the 1970s and 1980s, and in the decades previously.

The crowd included many Hunger Strike families in a special reserved and covered area, former Hunger Strikers and ex-POWS (I was standing in alongside Assembly Member Pat Sheehan, who spent 55 days on the 1981 Hunger Strike, and Séanna Walsh, former O/C of the republican POWs who  read out the 2005 statement from the IRA Army Council announcing the end to its armed campaign.)

Louth County Councillor Tomás Sharkey welcomed everyone to Dundalk before handing over to Councillor Imelda Munster from Drogheda in the south of County Louth who was MC for the day.

Acknowledging the incessant rain, local TD Gerry Adams quipped that he had never addressed so many umbrellas in his political career and “ahead of my 75-minute speech”. His speech, though, was not 75 minutes long but it was laden with emotion in remembering the sacrifices of the prisoners and their families as he offered personal insights into his meetings with the prisoners inside the Kesh during the Hunger Strike. It was also one of added importance in the light of the political crisis created by comments from the PSNI investigating the killings of Gerard ‘Jock’ Davison and Kevin McGuigan, statements eagerly seized upon by unscrupulous journalists and unionist leaders to pursue their own agendas. 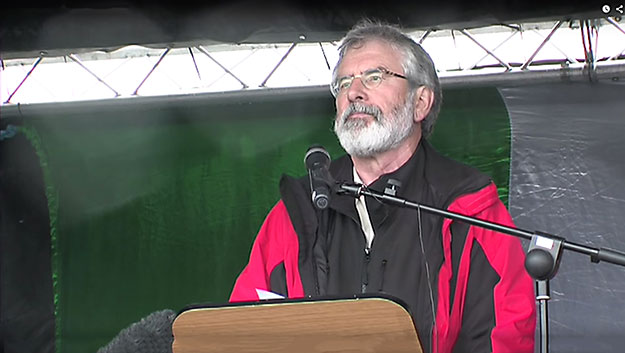 The Sinn Féin leader spoke of the courage and selflessness of the Hunger Strikers and of their families.“Their indomitable spirit and selflessness stand out as an inspiration to us all,” he said as he declared this to be a “special celebration” of the lives of the Hunger Strikers and what they stood for and fought for “in desperate circumstances”. They hold a very special place in the hearts and minds of Irish republicans, he said.

“The Hunger Strikers are exceptional. Perhaps it’s because of the very public way that they died; perhaps it’s because, as human beings, we are drawn to and inspired by those who are willing to sacrifice their lives in desperate circumstances to save the lives of others and in pursuit of a noble goal. Or perhaps it’s because we shared in the trauma of the families who demonstrated enormous endurance and tenacity through those long, difficult months. Their indomitable spirit and selflessness stand out as an inspiration.

“The generosity and self-sacrifice of the Hunger Strikers, and the hard work and support of thousands of people across this island and across the world, inflicted a historic defeat on the Thatcher Government.

“The Easter Rising of 1916 was a watershed in Ireland’s long struggle for freedom and against British rule. The momentous election of Bobby Sands gave the lie to the claim that the political prisoners did not enjoy popular support.” 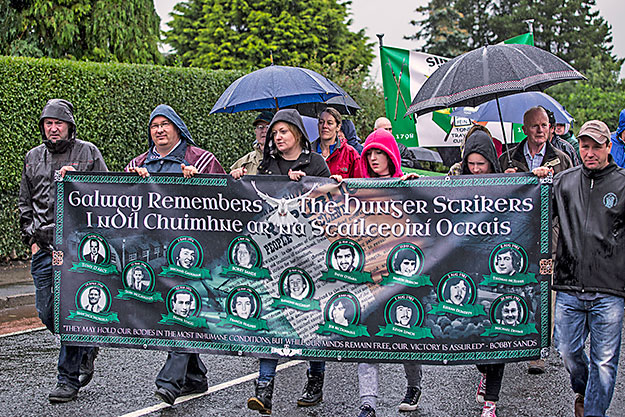 The election of Kieran Doherty and Paddy Agnew to the Dáil dealt another blow to the criminalisation of the British Government, a policy enthusiastically supported by the Irish Government, Gerry Adams said. Joe McDonnell came close to winning a seat in Sligo/Leitrim and Mairéad Farrell and other prisoner candidates won very creditable votes in a campaign with little real organisation or great electoral experience.

Gerry Adams called Dundalk man Paddy Agnew to the front of the stage. As the two men raised their fists together in solidarity, Gerry said that Paddy had blazed the trail for Arthur Morgan as Sinn Féin TD for Louth “and me here, Johnny Come Lately”, he laughed.

Gerry Adams attacked “the shallow politics” of the conservative parties in Dublin.

“It is clear that the sacrifices and the electoral successes of the prisoners have transformed the struggle,” the former MP for West Belfast said in the county of Louth for which he is now a TD in the Dáil. He continued:

“Fine Gael and Labour can rightly be blamed for the implementation of austerity policies and the dire social and economic consequences they have created.

“But there is no difference in policy between Fine Gael and Labour, and Fianna Fáil. They will not deliver a fair recovery but more of the same old cronyism and clienteles.

“A general election is only months, perhaps weeks, away. The Government says that a recovery is underway. If it is, it isn’t a fair recovery. It is a two-tier recovery that benefits them and their friends at the top, not the majority of hard-working, fair-minded Irish citizens.”

He said that Fine Gael and Labour will make one last desperate effort in the October Budget to buy the next election.

“We cannot and should never take the electorate for granted but I am confident that citizens will not be fooled.

“Sinn Féin offers a different way, a better way, to build a fair recovery. It is our responsibility to win the largest mandate possible for our party and for a fair recovery.

“The reality is that the leaderships of Fine Gael and Labour and Fianna Fáil long ago abandoned any real belief in the principles of equality and of rights contained in the Proclamation, or any commitment to a united, free and independent Ireland.

“Partitionism dominates and defines their politics. For them the struggle for Irish freedom ended with the Treaty and the Civil War. It ended with partition. But Ireland divided never can be free. So for us the struggle continues. And Sinn Féin is in the vanguard.

“For that reason, our enemies seek at every opportunity to attack our mandate, to undermine the rights and entitlements of our electorate, and to undermine the Peace Process. Like the men and women of Armagh and the H-Blocks, they seek to criminalise us. They didn’t succeed in 1981 and they won’t succeed today,” the republican leader said to loud applause and cheers. 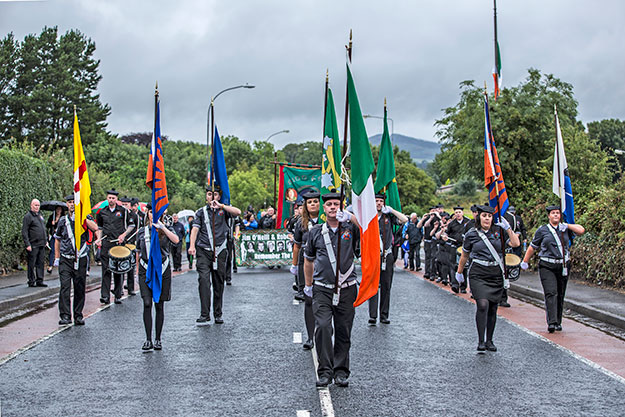 • Flute bands from across Ireland and Scotland led the procession PHOTO: Aidan McFaul

Gerry Adams also criticised those who have “opportunistically and cynically” sought to use the recent killings of Jock Davison and Kevin McGuigan to attack Sinn Féin.

“Let me be very clear. The killings of Jock Davison and of Kevin McGuigan were wrong. Those involved do not represent republicanism. They are not the IRA. The IRA has gone away .

“That organisation, undefeated, took the momentous step in 2005 and ordered an end to its armed campaign; instructed its representatives to ‘engage with the IICD [Independent International Commission on Decommissioning] to complete the process to verifiably put its arms beyond use’ and ordered its Volunteers to take part only in ‘purely political and democratic programmes’ and no ‘other activities whatsoever’.

“None of the many alphabet groups that now claim the proud name of the Irish Republican Army have a right to that title. They have no connection whatsoever with the men and women who bravely resisted British militarism in the 1970s, 1980s and 1990s and who defeated Thatcher in Armagh women’s prison and the H-Blocks of Long Kesh.

“As we approach the centenary of 1916 there is no need, rationale or reason for any armed groups whatsoever. It’s time they called an end to their sham campaigns.

“I have a similar blunt message for those who engage in a sham fight at Stormont on this issue in order to slow down or dilute the necessary process of change. Those who threaten to take action against Sinn Féin in the political institutions have no basis whatsoever for this.

“Sinn Féin’s mandate and the rights and entitlements of our electorate deserve exactly the same respect and protection as anyone else’s. And Sinn Féin will defend that assertively and robustly.

“We will not be lectured to by those who have failed to honour their obligations time and again. For our part, Sinn Féin has kept every commitment we have made.”

The National Hunger Strike Commemoration and associated events are made possible through money raised by the Sinn Féin National Draw. Please help make these occasions similar successes by purchasing or selling your National Draw tickets now.