Recovery? Maybe but who paid the price? 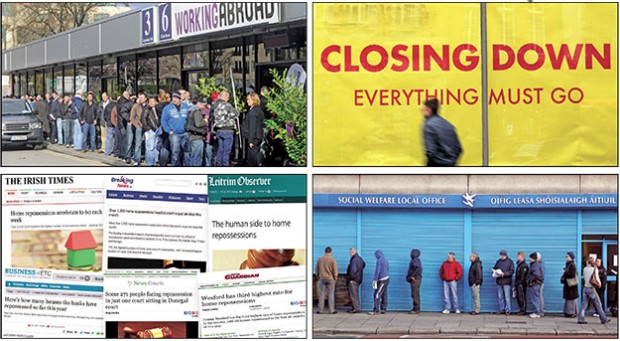 The ‘recovery’ is export-led, the result NOT of Government policy but of the decline of the euro vis-a-vis the dollar and sterling which is the result of the disastrous austerity policies that have devastated Europe

With youth unemployment still running at 20% and with many thousands living abroad in emigration, people here crushed by personal debt, mortgage arrears, job losses, lower wages and higher taxes, it is hard for many to take this nonsense of ‘economic recovery’ seriously

OVER-THE-TOP and self-congratulatory statements from Government ministers are a sure sign that the general election campaign is already underway.

While Labour is recovering from its long slumber and is busy trying to create a (don’t laugh) “workers’ agenda”, the main thrust of the Government parties’ strategy is to claim credit for the “economic recovery” we are supposed to be enjoying.

With youth unemployment still running at 20% and with many thousands living abroad in emigration, it is hard to take this nonsense, but the Government gaily quote statistics that they imagine support their claims.

The figures indeed do show that there is a recovery in economic growth.  But this recovery is export-led, particularly in the technological sector. It is the result NOT of Government policy (as they would claim) but of the decline of the euro vis-a-vis the dollar and sterling which is the result of the disastrous austerity policies that have devastated Europe.

In other words, our exports are cheaper and therefore more competitive.

This result could have been achieved, with much less social pain, if we had just quit the Eurozone and devalued our currency while refusing to pay back the debts of banks which should never have been accepted as national debts.

The second point is that capitalism is always a cycle of boom and bust, and (given the depth of the recession inflicted on us by Labour and Fine Gael, and before them Fianna Fáil) it was inevitable that there would be some recovery, even if the working people will be the last to experience it.

But the most important point is that the price of austerity and of the recession associated with it was not paid by those most able to pay – the rich, the bankers, the speculators, and Labour’s friends in big business. It was paid by the ordinary working people of Ireland, urban and rural, who have been crushed by personal debt, mortgage arrears, job losses, lower wages and higher taxes.

Yes, higher taxes. Despite all the Government blather, the Property Tax and the Water Charges are taxes even if they give them different names.

It was not those who were the cause of the crash who paid for it, but those who had benefitted only marginally from the boom preceding it. 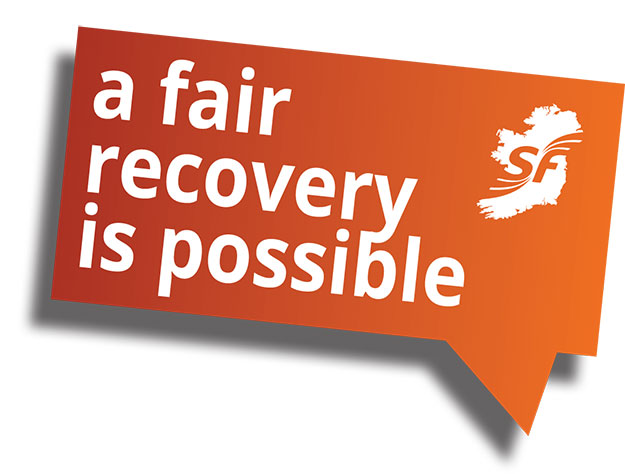 And Labour expect the electorate to be grateful now that the cycle is beginning to turn. They believe that we will forget the hardship, forget the shameful treatment of people with disabilities, of people needing hospital care, of our old age pensioners, and of our young people forced to work on the JobBridge scam and other wheezes designed to make people work for nothing or next to nothing.

A ‘Boss’s Charter’ if ever there was one.

Opinion polls, however, suggest that people are not forgetting.

People know that this hardship, endured by the great majority, was unnecessary; know that it was imposed to keep the rich safe, to defend Europe’s banking system and the reckless (and ruthless) German lenders behind it, and to prepare the ground to get the old system back on track.

Real recovery would mean the creation of real jobs at decent wages. And if private enterprise can’t do it, then – no matter what the EU says – the Irish state should do it.

That’s what national freedom is about, and why the struggle to end austerity and give people a decent livelihood is bound up with the struggle to reassert our national sovereignty and unite our country.

They are two sides of the same coin, as James Connolly – a man whose name is frequently taken in vain by the disgraced Labour Party – often told us.

And as the media commentators panic over who will be in the next election, and as the political establishment twists and turns in its efforts to avoid real change, these real issues come to the fore despite all the hype and special pleading.

Every Irish citizen – and indeed every person resident in our country – has a right to a job and a home, a right to health care and education for their children, a right to be free to revive our national culture and be secure in our own land.

Because they all rely on the policies that got us into the mess to get us out when what we need is a change of policy that will put the ordinary people ahead of the grabbers and the speculators.

We need a change.