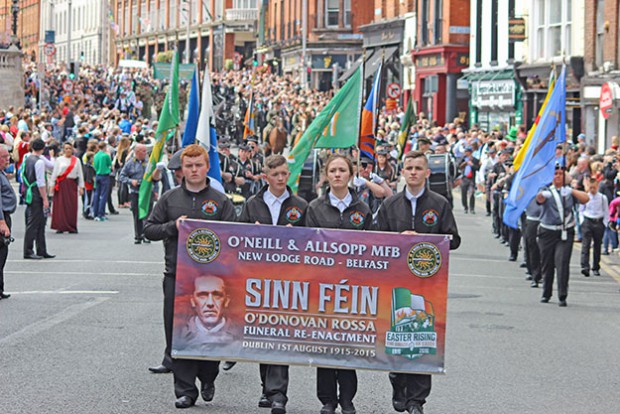 Hundreds in the crowd got into the spirit of the event, donning period dress as mourners

THOUSANDS of people lined the streets of Dublin on 1 August as Sinn Féin marked the 100th anniversary of the legendary 1915 funeral of unrepentant Fenian Jeremiah O’Donovan Rossa – an event widely seen as the call to arms for the Easter Rising of 1916.

Originally from Rosscarbery in County Cork, Rossa was one of the first recruits to the Irish Republican Brotherhood. Arrested and charged with “high treason” and plotting a Fenian uprising in Ireland, he was sentenced to penal servitude for life in prison.

In 1869 he was elected to Parliament as MP for Tipperary but this was declared void as he was imprisoned in England.

Released under a general amnesty in 1870 and exiled to America, he joined the Fenian Brotherhood and masterminded a bombing campaign in Britain in the 1880s. He remained one of the most prominent and vocal supporters of Irish freedom amongst the Irish exile community for the rest of his life.

As well as republicans from right across Ireland, O’Donovan Rossa’s great-grandsons, Williams Rossa Cole and Rossa Williams Cole, travelled from the United States to be at the full-scale re-enactment. 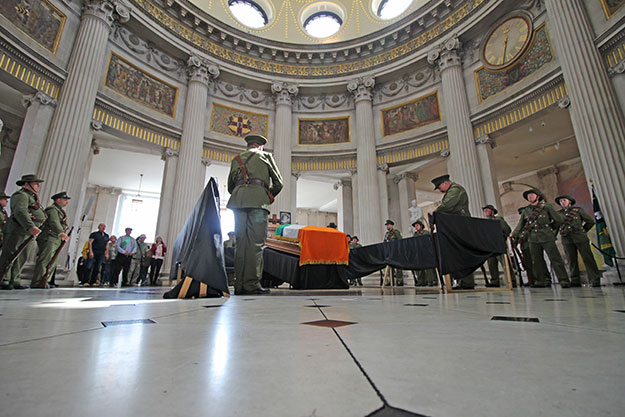 “It’s pretty amazing to be here in this space, 100 years later.

Inside City Hall, actor Allan Keating passionately delivered the speech by radical Sligo priest and republican Fr Michael O’Flanagan, who proclaimed that the return of the remains of O’Donovan Rossa “may be the starting-point of a new epoch in the history of Ireland”. While he spoke, the Volunteers who had provided a guard of honour to the Triclour-draped coffin throughout the morning bowed their heads.

As the doors of City Hall swung open, leading to the cobblestones outside Dublin Castle, hundreds in period costume removed their hats and caps as a show of respect. Volunteers bore the coffin on their shoulders and placed it in the traditional horse-drawn hearse to make its way to Glasnevin Cemetery. 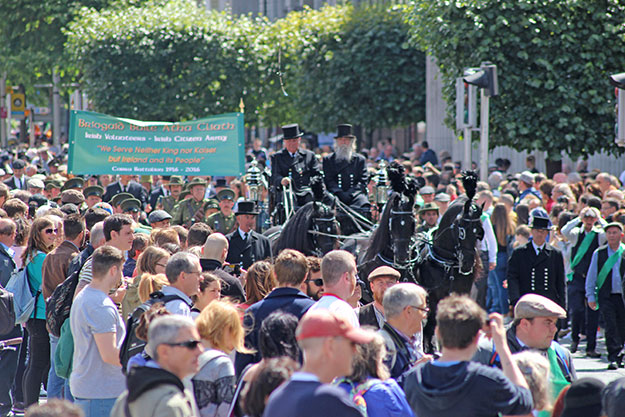 The weather was even on key. Leaden skies in the morning made way for stone-splitting sunshine in the afternoon as the cortege left City Hall – just as it had 100 years ago.

The huge funeral procession (accompanied by the O’Neill/Allsopp, South Derry Martyrs, Carrick on Suir and Éire Nua bands) was watched by countless onlookers and tourists as it made its way along the original route through the city centre, past Trinity College, along O’Connell Street and past the GPO, and on to Glasnevin Cemetery.

Hundreds in the crowd got into the spirit of the event, donning period dress as mourners. Led by the Cabra Historical Society in Irish Volunteer and Irish Citizen Army uniforms and carrying rifles – along with the Claíomh living history group resplendent as leading republican figures such as Constance Markievicz – the entire spectacle was an eye-catching event in Dublin’s bustling city centre on a Saturday afternoon.

In a brief address, Sinn Féin President Gerry Adams TD praised the life and legacy of the veteran Fenian.

“Rossa’s funeral mobilised and galvanised all sides of progressive opinion. The funeral committee included 11 of the leaders of the Rising who were executed 10 months later. They stood where we are standing today,” he told the hundreds inside the cemetery, with the speech relayed on large screens to the many still outside the gates. 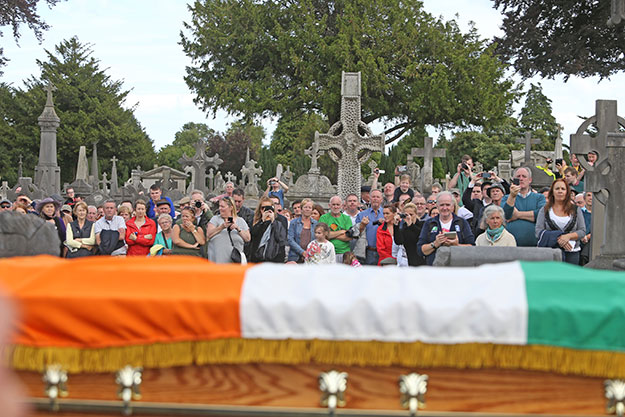 Gerry Adams also referenced O’Donovan Rossa’s “dynamite campaign” of bombings across Britain, underlining the hypocrisy of the mainstream parties in their attitudes to republicans of various generations. He said:

“Isn’t it great that this morning the Irish Government celebrated this old Fenian and his activities? He was, in many ways, a very active republican.

“Today, almost a century later, we have many, like O’Donovan Rossa, who spent years as political prisoners or were on the run or were forced into exile. We remember also all those who suffered and died in the most recent conflict, including our patriot dead, some of whom are laid to rest in this cemetery.”

Noting the large number of young people there, Adams said they would not know the terrible reality of armed conflict in our country.

“Let us be very clear that the Peace Process and the political progress we have achieved were made possible because of the sacrifices of countless republicans over the generations.

“It is hugely positive and progressive that we today can pursue the complete unity and freedom of the Irish people by peaceful means. And we are pursuing that cause.”

The O’Donovan Rossa event and future 1916 centenary initiatives are made possible through money raised by the Sinn Féin National Draw. Please help make these occasions similar successes by purchasing or selling your National Draw tickets now.