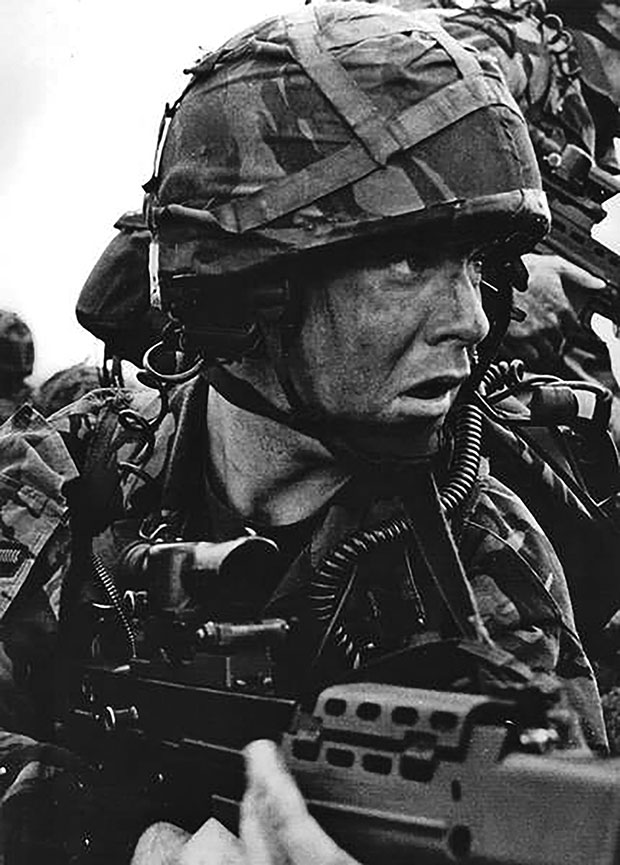 GLENN BRADLEY (b.1967, west Belfast) is an international businessman and a member of the Board of Interaction, an organic inter-community project on the West Belfast Peaceline dedicated to peace and reconciliation through processes of engagement (www.peacewall.org) Glenn is a former soldier in the British Army who saw operational service in various theatres, including the North of Ireland. He is a former officer of the Ulster Unionist Party and participated in the Good Friday negotiations. He is a member of Veterans for Peace UK (www.veteransforpeace.org.uk).

I WASN’T born a Methodist, a unionist or a citizen of the United Kingdom or of Ireland. I was born here on the island of Ireland, a human; pure and free from inherited identity labels or symbolism; devoid from political aspirations; unaware of social-economic-political conditions; and yet some on this island view or label me as ‘sectarian Orange scum’ or ‘a Hun’.

I wasn’t a player in the time of imperial Britain. I didn’t seek the Government of Ireland Act that partitioned this island (nor did my ancestors as patriotic Irish loyalists).

I wasn’t a lobbyist or lawmaker in any sectarian agenda (North or South) that chose to wallow in marching or religious rights before human rights or equality.

When the recent civil uprising of 1969 began, the onslaught of violent Irish republicanism helped create some of my earliest experiences.

When the no-warning pub bombings of the Woodvale Arms (Cornetts) and the Mountainview exploded, the shockwaves lifted the roofs of all the houses in our street and blew in our windows, showering and injuring some of us with flying glass. The memory is impregnated in my brain like a weeping scar. I can still taste the fear of those terrible tragedies which killed only innocents.

During 1973, another no-warning Irish republican pub bombing (again on Cornetts) saw a piece of shrapnel skirt my right eye, injuring me, and where to this day a scar remains.

Growing up in the Woodvale, I became motivated by a sense of rage at violent Irish republicanism along with a growing awareness of social-political injustice. As a young man, I enlisted into the British Army. My aim was simple: I wanted to get the best training possible and come back to my homeland, taking the fight to the IRA. It was naïve, simple and primitive but many 16-year-olds from all sections of our diverse society were thinking similarly. Many teenagers were choosing to ‘hit back’. From 1969 to 1997, lots became ‘soldiers’ for their varied notions of nationhood.

That was then and this is now.

Time and experience change many things, including people’s mindsets on inherited identities, symbolism, myths and propaganda.

Age permits a human to reflect and evaluate their own truth: their place in time and space.

As we realise that life is not a dress rehearsal for something else, most people examine their mindset, their words and their actions in a positive, evolving way.

Breaking a cycle from inherited systems or beliefs or ideologies can be terrifying but, like ships, people are not designed to sit in safe harbours. The mind of a human is always best energised when it is making a positive difference to the self, to other people or to the environment we live in.

As a businessman I know that luck seldom plays a part in success. Focus, patience and practice are what deliver results. Great achievement only ever comes from great sacrifice and so looking to our dreams and vision for here we must choose to accept the risk involved to support reconciliation and the delivery of the lasting, peaceful, democratic society that so many of our population strive for.

That risk involves facing people who may have completed violent acts in the past but who are, this day, evolving to be peace architects as they strive to remove the gun from politics on this small island.

Importantly, real respect is flexible to change. Beautiful visions can be created from such real respect and trust.

In closing, I’m asking that all of us be open to others, listening, placing ourselves in one another’s shoes. Renouncing violence and in a spirit of generosity or forgiveness, let us all believe that good things are possible – now.