The importance of Irish to the national struggle 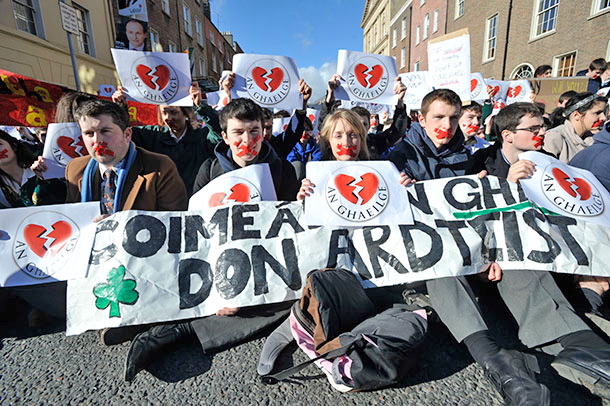 Undoing the conquest does mean putting an end to the championing of private rights to productive wealth over the common good, but it also means restoring our language to an active place in the centre of our national life

THE Fine Gael/Labour Government’s programme of austerity and Labour’s total capitulation to the interests of bankers and EU policy makers has brought home to more and more working people that a decent society can only be built with a decent economic system – one that puts the interests of the mass of the people first, above the bankers and investors.

But the working people of Ireland are not mere puppets of the economy, existing to make the system work efficiently and without conflict.

Indeed, politics is all about conflict between different visions of the economy, about the different interests of those who control productive wealth and those who survive by selling their labour power.

It is also about restoring the Irish people as a sovereign people, and it is this which makes the case for national reunification – of the country and of the people – so central to real change for us today.

And equally central is our attitude to the Irish language.

The English conquest crushed the language and, in the national rebirth that gave rise to the Tan War and the struggle for a Republic, the need to undo that conquest was a paramount issue.

So, yes, as Linda Ervine argues, you can be both affirmative in your attitude to the ancestral language of this country and advocate a connection with England if you believe that is necessary to safeguard your rights as a specific minority community in Ireland.

Republicans don’t believe that connection is necessary but republicans do recognise the reality of current Northern Protestant alienation from the national struggle.

But, on the other side, the national struggle is about undoing the conquest or it is about nothing at all.

Undoing the conquest does mean putting an end to the championing of private rights to productive wealth over the common good, but it also means restoring our language to an active place in the centre of our national life.

To do this requires more than a polite cúpla focal.

It requires real commitment, to insist upon Irish-language rights, in the Gaeltacht and throughout the state, and to insist upon the Irish character of the Southern state as part of the programme of ending the exploitation of the many by the few.

Now, as we gear up for an election, is the time to outline what exactly republicans propose to do about the language question.