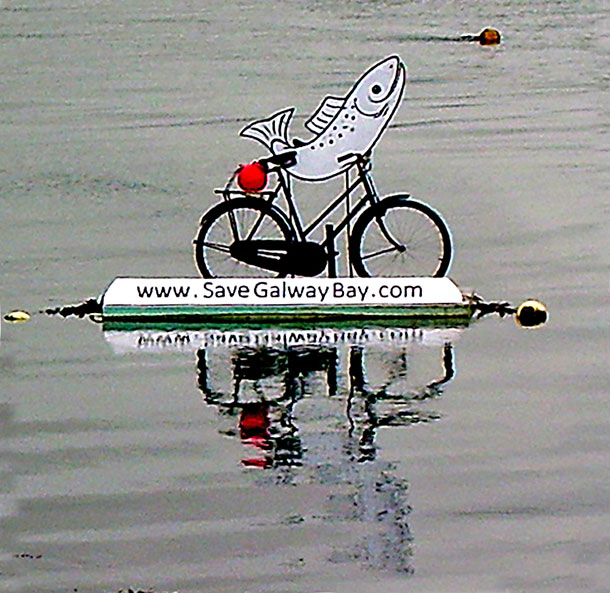 'What BIM have done to us is unfair. They told us they were going to put money into lobsters. It was all bullshit, the whole lot of it – lies and bullshit!'

IT IS POSSIBLE to look at the west of Ireland and not see what the dispossessed feel in their bones, in the lightness of their heart, in the dark night of their soul.

If – when you visit the Beara Peninsula, the Burren of Clare, the Aran islands, Connemara’s rugged coastline, the sweep of Sligo, or the rolling highlands of Donegal – you see nothing more than a turbulent Atlantic, a rain-shrouded mountain range, sparse rocky bogland, a barren land punctuated by patches of vegetation, the occasional tree and shrub, a dwelling dotted here and there and capricious weather patterns, take heart.

Hundreds of thousands of people like you travel each year to witness the timeless natural beauty and the sensual magic that resides in the mountains, valleys, woodlands, rivers and lakes of the landscape; and in the waves, islands, faraway shores and bluegreen horizons of the seascape.

In winter, this is life itself, with all its rage and humility. In summer, this is moonlight on the bay, all calmness and serenity. And when the moon invites the ghosts of the land to cast their shadows, you should not feel intimidated.

Those around you, whose genes still carry the dreams and hopes of the ancient tribes, instead take solace from these ghosts for they spark souls and fire spirits. They are the reason for going on.

These places hold timeless memories, embedded deeply in the dreamscape. Memories that hold pain as well as joy. Lives shaped by a smile, a look, a word, a melody, a hug, a kiss. Hearts warmed, minds stimulated, friendships formed.

This is why we all travel.

In December, the Cliffs of Moher received its one millionth visitor of the year.

“Nothing I read or saw on TV prepared me for it,” says Carl Stelzer, an American journalist from land-locked St Louis, who visited the Burren and the Cliffs of Moher by chance several years ago.

“There is a stark beauty to the west of Ireland that I have never seen anywhere else in the world. That starkness draws people, it is the reason they are travelling thousands of miles. And nobody wants to stare out at an industrial fish farm in the bay.

“Once the word gets out, people are going to be much less inclined to want to visit. They want to go to where the mountains meet the sea, where it is unspoiled, unparalleled in the world, where history and people are part of the landscape. That’s what captures the imagination. If it was just an uninhabited landscape it wouldn’t be the same. Once it’s fucked up . . .’ 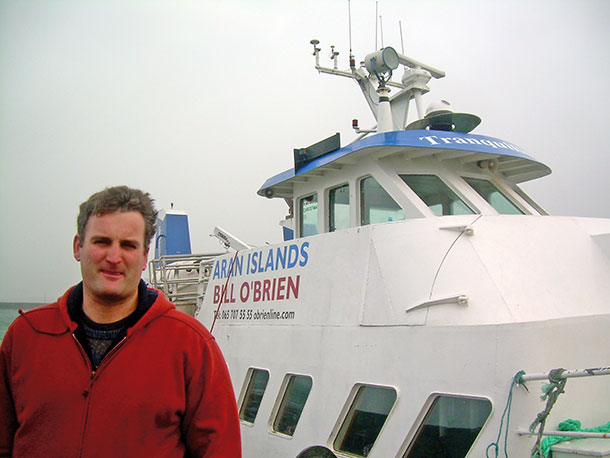 Liam O’Brien, who runs three of the seven ferries that service the Aran islands during the tourist season from March to October, agrees with the argument that a negative meme about Galway Bay could be detrimental. “The more I think about it, the more I think the perception issue is a plausible scenario.”

Every year the O’Brien Line and rival company Doolin 2 Aran Ferries, run by the Garrihy brothers, carry around 200,000 people across the bay. The majority are day-trippers, who turn up at the quay and are tempted by a cruise under the Cliffs of Moher or a run to Inis Oírr, the Aran island nearest the Clare coast.

Inis Oírr is totally tourist-dependent. While overseas visitors avail of the amenities, take in the scenery and then return to Doolin, Irish visitors stay longer.

“Inis Oírr is an extremely popular family destination,” says O'Brien. “The facilities the island has are ideal. The kids can be down the playground or the beach, running around and safe. They are not going to be hit by a car because there is no traffic as such. The pubs are big, and they allow the kids to be there in the evening. Families want to relax, have a few drinks. If the perception is out there that this wonderful beach is polluted they are going to go somewhere else.”

Tom Doherty, a 55-year-old part-time fisher out of Doolin and the local coastguard out of the interpretative centre at the Cliffs of Moher, knows how important tourism is to north Clare. The centre employs 26 people all year round, adding seasonal jobs when the cars, minivans and tour buses arrive in convoys. From the Cliffs of Moher back along the coast, from Doolin to Kinvara, virtually everyone has a business or a job that relies on tourists. Doherty agrees that the visual impact of a fish farm in the bay could deter the tourists. “People can be very fickle,” he says. “We see it here.”

“The fish farm is a contradiction,” he adds solemnly. “The waters of Galway Bay are beautifully clean and clear, lovely and blue. You go to the islands in summer, it’s like the Mediterranean – a different world altogether. The water is warm enough to swim in. People go crazy when they see how clean the water is. There is nothing to pollute it.”

A giant fish farm will pollute the bay – Doherty has no doubts about that.

“I can see the tides carrying the pollution from the farm back into the bay,” he says. “And this pollution will wipe out all the native fish – lobster, crab, crayfish, mackerel, pollock, white fish, everything.”

Michael O’Connell, an inshore fisher and a B&B owner in Doolin, worries for the future. For 30 years he has run a small boat along the Clare coast, fishing for crab and lobster from St Patrick’s Day until Christmas Day, gill-netting for white fish in the springtime.

He has a constant supply of high-quality lobsters, which he keeps in store-pots until Garrihy’s Seafood in Doolin are ready to buy them. “Our lobsters are prized on the continent because lobsters from Galway Bay are among the cleanest in the world.”

When the fishing board announced their plan for the fish farm, he was invited along with the other inshore fishers of the bay to the offices of Bord Iascaigh Mhara in Galway.

And, he adds, of “that unsightly view”:

“You will be able to drive out by Black Head and Finore and see the Connemara coast and the Aran islands, the fish farm will be a big eyesore. People are not going to come here to look at that.” 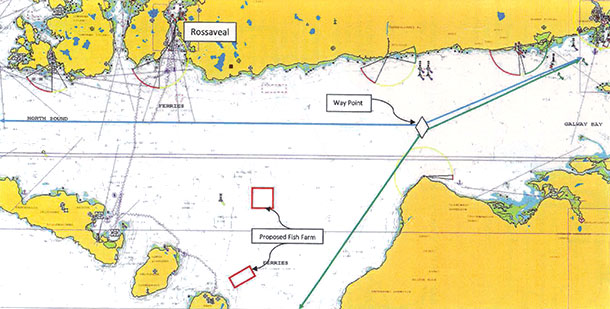 Like Doherty and other inshore fishers, O’Connell believes the fish farm will end the fishing industry in the bay.

“I find the behaviour of BIM and the Marine Institute very strange. When I started here, started to put out a pot and got lobsters, any size of lobster would do. Now they are put back if they are small. They are graded. Even the shrimp and the crab are put back, and it has never been so good. We have followed the code of practice and now they want to kill the whole lot.

“What BIM have done to us is unfair. They think we are fools of fishermen. They told us they were going to put money into lobsters. It was all bullshit, the whole lot of it – lies and bullshit!”

Anglers insist that migrating wild salmon travelling through the bay from the Corrib will be affected by the fish farm.

Damien O’Brien, an angler from Cork, says all salmon migrating along the west coast are at risk.

“Any pressure from sea lice could wipe out salmon native to England, Wales, France and Spain in a very short few years.”

The anglers also fear an absolute end. Billy Smyth, an angler with the Galway Bay Against Salmon Cages group, is adamant about this.

“This and other proposed mega salmon farms will have devastating effects on our wild salmon and sea trout stocks, resulting in the loss of hundreds if not thousands of jobs in the tourist angling industry.”

Despite the aggressive opposition from the angling and fishing communities, the communities in the villages and townlands on the Clare and Galway shores of the bay are quietly pragmatic. They do not believe that their livelihoods will be put at risk.

“The disadvantages of this fish farm far outweigh the advantages,” says Liam O’Brien confidently. “A few companies will make a lot of money out of it but there are no knock-on effects to the islands or here.”

Niall Gibbons, Chief Executive of Tourism Ireland, says there is a determination to ensure that tourism growth continues, to deliver almost €4billion in overseas tourism revenue to the Irish economy by welcoming 7.7million visitors in 2015. One in four of those visitors will travel to Galway Bay. 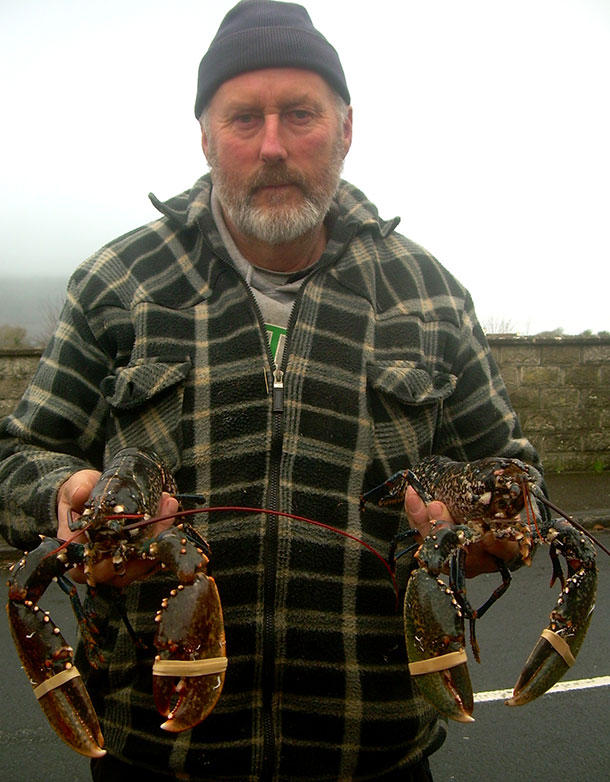 • Michael O'Connell fishes for crabs and lobsters in Galway Bay

If the minister does give the go-ahead for BIM to invite Marine Harvest, the Norwegian aquaculture corporate, into the bay, many fear the worst – none more than Michael O’Connell.

“All those fellows in BIM and the Marine Institute don’t care,” he says, perhaps a little unfairly with his sincerely-held but broad brush of criticism. “They are just there for a while. They will get their pension and go home. They don’t care about the long-term damage. They will all be gone and we will be left with a fine big fish farm stuck out there in the bay.”

The American journalist has a salient viewpoint.

“There’s only one west of Ireland; there’s no competition,” he says. “The west coast of Ireland is unique. You can put salmon farms anywhere you want in the world; you can’t replace the unspoiled beauty of the west of Ireland.”

The feeling in Clare and Galway is mutual. Galway Bay needs a fish farm like a salmon needs a bike. 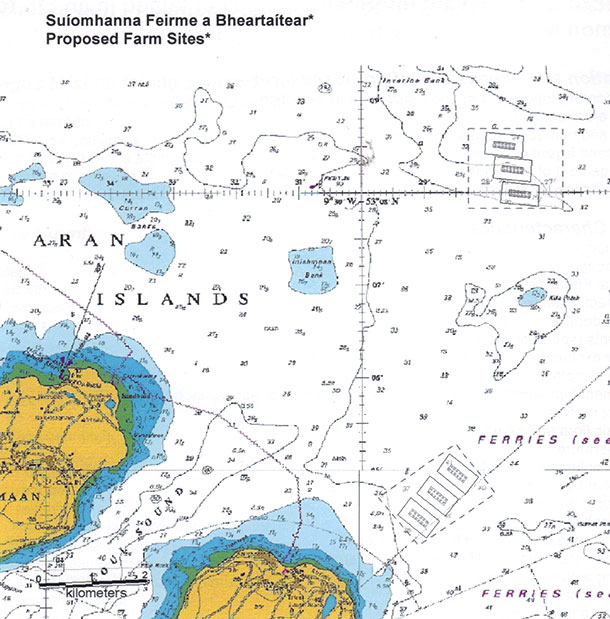