The tipping point to secure political power for change

• In Europe parties like SYRIZA in Greece, Podemos in Spain and the SNP in Scotland are on the rise

The imperative of having real political power to advance republican objectives should be the basis of Sinn Féin going into government in the South, not simply entering coalition for its own sake

THERE HAS BEEN unprecedented upheaval in Irish politics in recent years. Water charges especially have become a catalyst for popular discontent against the Fine Gael/Labour Party coalition. In the North, the convergent political impasse and economic challenges threatened the political institutions and a potentially massive crisis because the British and Irish governments took the Peace Process for granted.

It would be premature to say the ongoing flux represents a permanent political realignment but the status quo nationally has shifted, creating the potential for more change.

Those on the progressive and republican Left need to make that change irreversible by altering the current balance of forces to create a new political realignment. That will only come about through popular support for a credible political alternative that can effectively challenge the conservative power blocs and their policies.

During the Stormont talks, a British and Irish Government alliance tried to push welfare cuts and increased austerity in through the back door. Fine Gael’s and Labour’s support for the Tories can only be understood as an attempt to nationalise the policies they have driven in the South and for cynical electoral reasons against Sinn Féin.

Both governments and the economic elites they represent are in counter-attack mode. Their motivation is to reverse the political strength of Sinn Féin North and South. Both they and external capital/banking interests have identified the party’s growth as a strategic block to their hegemony. The prospect of Sinn Féin as champions of equality in government North and South is a nightmare scenario for them.

The wider context is an ideological war that has engulfed Irish society and which stretches across Western Europe and the Americas. It is no coincidence that SYRIZA had such success in the Greek general election, that Podemos has become the largest party in Spain, or that the Scottish National Party is on the rise. Or indeed that UKIP has emerged as a British Conservative stalking horse, the French National Front is energised, and Obama’s attempts to restructure the US economy, introduce new taxation measures and defend his health insurance legislation face increased opposition from the US Republican Party right wing.

In Ireland, the current political flux may only be comparable to the ideological divisions underpinning the counter-revolution of 1921-23. Stark ideological differences now exist over how Irish society should organise itself. There is a growing polarisation between the interests of citizens’ rights and community and those of international banks and capital. 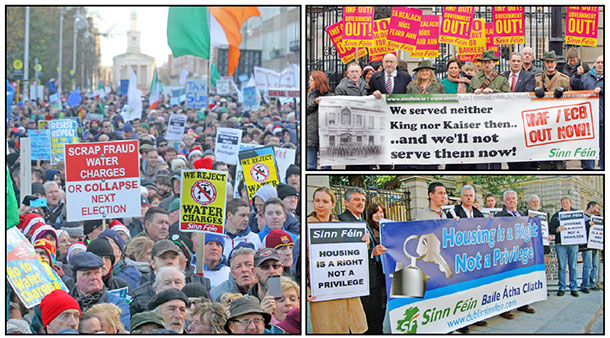 The strategic challenge for Sinn Féin is to keep moving forward in this context and national perspective is key to that. It must be the primary determinant of the party’s strategy and politics. Without it, electoral growth and future government in the South, or indeed the political institutions in the North, risk being limited to ends in themselves instead of the means with which to achieve ‘An Ireland of Equals’.

As a party of government in the North, Sinn Féin now has to ensure implementation of the Stormont House Agreement whilst advancing equality, opposing austerity, and prioritising strategic investment in public services, job creation and growth. Power-sharing must be entrenched, civic society’s role in the democratic process increased, and authentic reconciliation developed.

In the South, the party’s priority is to prepare for government with long-term, sustainable investment plans for health, welfare, education, industrial development and infrastructure so as to stimulate economic growth from which all citizens benefit.

The imperative of having real political power to advance republican objectives should be the basis of Sinn Féin going into government in the South, not simply entering coalition for its own sake. But a new critical mass for change will be essential to create those conditions. That presupposes not only continuing political realignment but also increased unity within progressive, Left, national and democratic opinion which shifts the political centre of gravity towards a tipping point and brings them about.

Political engagement needs to take place among all those genuinely committed to democratic control of the economy, social justice and an agreed, united Ireland. Progressive political, social and community movements should collectively discuss the development of an agenda which mobilises the greater mass of Irish society in support of equality, protecting the most vulnerable, distributing wealth and resources according to citizens’ needs, and guaranteeing their rights.

As new international political forces move towards governmental power, formal political discussion should commence in Ireland on how to forge consensus between Sinn Féin, progressive independents, the trade union movement, grassroots communities, and the non-sectarian Left. That process should concentrate on building durable, strategic, cross-sectoral, cross-community and political alliances North and South.

This is the time for serious political discussion among progressive Irish political, community and trade union activists on the ideas and strategies which will ensure the future election of a Left coalition in the South dedicated to establishing a new national Republic.

It is the only way forward.