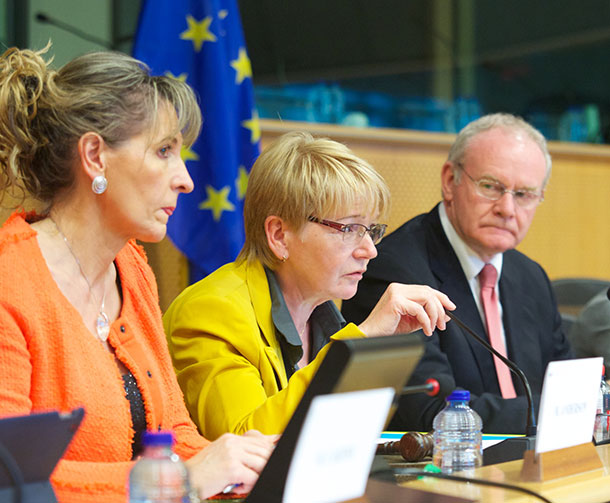 MARTIN McGUINNESS briefed MEPs from across Europe on the current state of the political process in the North when he visited the European Parliament in Brussels in October.

Speaking at the ‘Advancing the Irish Peace Process’ event, which was hosted by the GUE/NGL EU Parliament Group, Martin McGuinness warned that the gains of the political process could be under threat if the agreement on contentious issues can’t be found.

During the visit, the deputy First Minister also met with the leaders of several European Parliament groupings to update them on the current impasse.

He told MEPs that repeated attempts have been made to undermine the political institutions in the North in recent years.

“First, mainstream political unionism has sifted towards an anti-Agreement position.

“Second, a partisan Tory-led British Government is seeking to impose its policy of welfare and public service cuts on the North while pandering to a growing list of unionist demands.

“Alongside that, the Irish Government, a co-equal guarantor of the agreements, has been focused on domestic economic issues,” he said.

Martina Anderson MEP told MEPs that the EU has a role to play in supporting the political process.

“We need to find a way forward. There is a serious danger that the progress we have made will be in vain if these talks are not successful.

“So far in the North of Ireland we’ve received tremendous support from the EU to help move on from conflict and towards prosperity. I hope this continues,” she said. 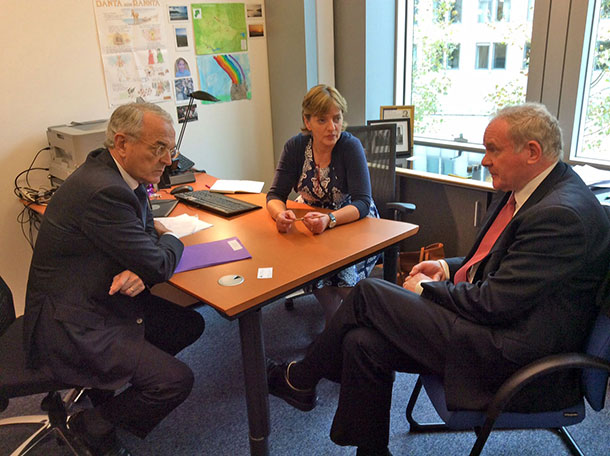 During the visit, Martin McGuinness also met with EU officials to secure European assistance for workers at Ballymena’s JTI Gallaher tobacco factory which is set to close with the loss of almost 900 jobs.

“I had very positive discussions with key officials and MEPs involved in the European Globalisation Adjustment Fund which has a €150million budget to assist workers facing redundancy by aiding them retrain or to set up their own business.

“I strongly made the case that Gallaher’s clearly falls into the remit of this fund which aims to help people losing their jobs as a direct result of global market trends,” Martin McGuinness said.