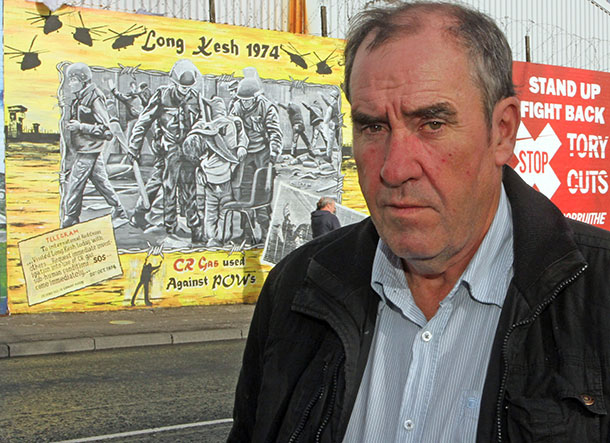 Research by the ex-POWs and others has established that CR gas was stockpiled and ready for use at Long Kesh.

THE BURNING of Long Kesh and the events of 15/16 October 1974 is one of the most significant events in the history of the conflict and republican prison struggle.

Involving as it did the destruction of the Long Kesh camp and pitched battles between IRA prisoners and the British Army (described by some as the biggest military engagement of the war), the repercussions from the events of that October and the days following are still being felt 40 years later.

The incidences of cancer among republican prisoners involved in the revolt in Long Kesh have led many to believe that these illnesses and subsequent deaths can be linked to the British Army’s use of CR gas to quell the uprising.

Spearheading a decades-long campaign to ferret out information and piece together the story of what happened at the time are former POWs Jim McCann, Joe Barnes and Joe Doherty.

All are convinced that specialist British Army units were deployed with instructions to use the secretive CR gas and that this was effectively a ‘field experiment’ designed to test the weapon’s capability and the effects it had on those affected by it. The Long Kesh POWs were human guinea pigs.

Research by the ex-POWs and others has established that CR gas was stockpiled and ready for use at Long Kesh.

Whether its use has in some ways contributed to the cancers contracted by the political prisoners remains.

In the months leading up to the burning of the ‘Cages’, continual protests and confrontations with the prison authorities were the order of the day.

In challenging the prison regime over the appalling conditions they were forced to endure, the POWs refused visits, destroyed beds and bedding, rejected prison food and existed on their parcels, and as a last resort staged mass hunger strikes. 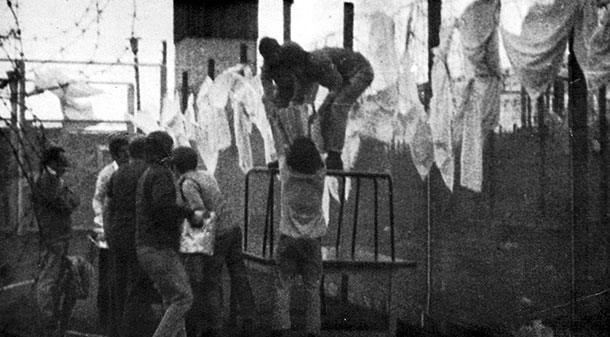 Brutal raids by the British Army were another bone of contention as British soldiers exacted revenge on high-profile prisoners or those convicted of attacks on military targets.

In the week prior to the burning of Long Kesh, an agreement of sorts had been thrashed out between the camp staff and the prison authorities.

Within days of the agreement, the authorities went back on their word as the British Army continued to carry out intensive searches.

On 15 October, an incident in Cage 13 saw a row between its occupants and prison guards over the prison food.

When the authorities refused to allow the prisoners’ O/C (Officer Commanding) to mediate it was clear nothing had really changed.

It was against this background that the decision to torch Long Kesh was taken. 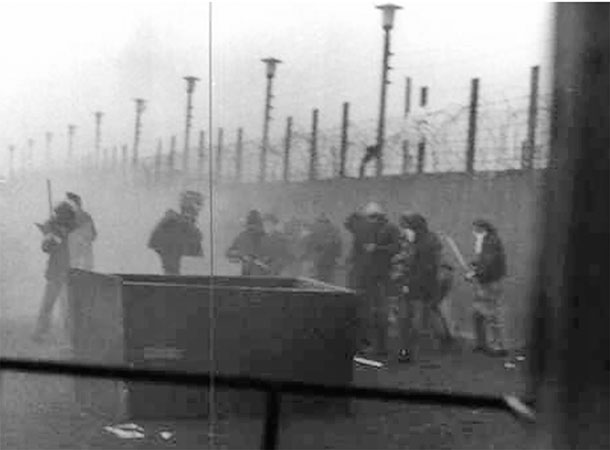 There were as many as 1,600 republican POWs in what was known as ‘the Cages’ of Long Kesh, with each one consisting of three accommodation huts, each holding 80 men.

Both sentenced prisoners and internees were incarcerated in Long Kesh and when the order was received they set fire to the huts.

The prisoners seized control of the interior of the camp as the prison warders retreated, leaving the protesting POWs to ignite what they could.

As the British Army controlled the perimeter of the camp with armed patrols there was no question that the burning was part of a wider attempt at a mass breakout.

One former POW, Joe Doherty from Belfast’s New Lodge Road area, told An Phoblacht the British Army imposed “martial law” on the camp and said anyone trying to escape would be shot dead.

The night of 15 October passed with the POWs having free rein but awaiting the inevitable confrontation with the British Army intent on retribution.

The set-piece battle would take place on the camp’s football pitches, located in the middle of the complex, as daylight broke on 16 October.

The prisoners deployed cage by cage as units, armed with rudimentary weapons made from bedsteads and with other hastily-contrived batons. The British Army squads which had surrounded the republicans were fully equipped and armed to the teeth with riot weapons, including rubber bullets, CS gas and wearing gas-masks.

Some 1,371 CS gas canisters and grenades were used according to the British Army’s own log, some dropped on the prisoners from the air.

Eventually and inevitably, the British Army wrested back control of the camp.

With their superior firepower and overwhelming numbers as well as excessive brutality they over-ran the prisoners.

It was in the last throes of the fighting, with about 350 prisoners making a last stand in the south-east corner of the playing fields, that the British Army unleashed what many believe to have been CR gas.

Again according to the British Government’s own documents released under the 30-year rule ‘Report on Helicopter Activities in Support of operations in the Maze Prison – 15/16 October 1974’ the helicopter returned to base to collect 15 new canisters and grenades which it then dropped on the remaining prisoners.

According to some of the besieged POWs, these were cluster bomb type devices with pellets exploding over a wide area making it harder to escape the debilitating effects of the gas.

In his efforts to get to the bottom of what transpired in Long Kesh in October 1974, former POW Jim McCann from Ballymurphy has uncovered documents that confirm CR gas was held in Long Kesh even if they cannot prove the weapon (or “Riot Control Agent”) was used on the protesting prisoners. 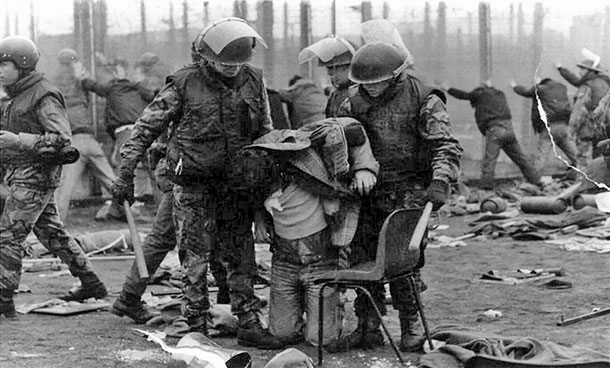 What McCann and others involved in the campaign are asking is: “Were these ‘tests’ carried out in Long Kesh in 1974?”

Research carried out for North Belfast ex-prisoners’ group Tar Isteach by researcher Chris Kelly found that the experiences of those prisoners caught up in the last stand at the football pitches are consistent with the findings of research into the use of CR gas in the British Government’s Porton Down military chemical research facility in England. Kelly wrote:

“Tests completed at Porton Down show CR to be much more aggressive than CS. CR is 10 times as potent as CS and as such would produce much more debilitating effects.”

In interviews with prisoners bombarded with the CR gas, Kelly was told by one: “I thought my face was going to explode.”

Another said: “I remember not being able to breathe. The gas was so thick I tried to prise my throat open in an attempt to increase the air passage.”

As most of these prisoners would have experienced CS gas on the streets of the North, they would easily have recognised the different effects of CR.

Quoting from ‘The Historical Survey of the Porton Down Volunteer Programme’, Chris Kelly found symptoms such as “severe pain about the eyeball, a painful or acute burning sensation of the skin and excessive lachrymation”. 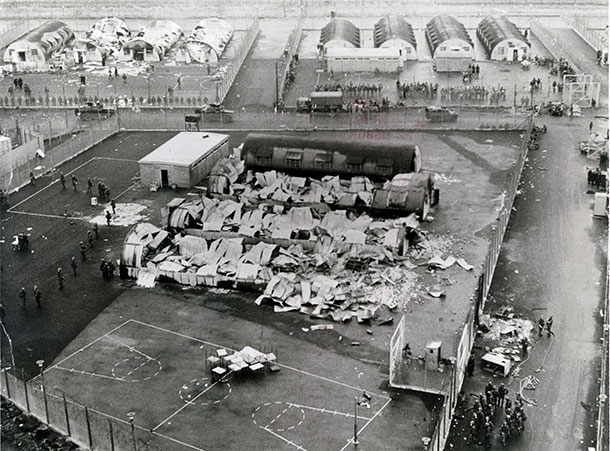 Other research, according to Chris Kelly, found that animals exposed to CR gas exhibited “incoordination, spasms and convulsions”, indicating that CR contains properties that attack the central nervous system.

Prisoners in the last group experienced similar sensations with one telling Kelly: “My body wasn’t reacting to what my mind was telling it to do.”

The same prisoner remembers seeing “grown men literally running into each other dazed, confused and screaming”, adding: “It is something I’ll never forget.”

Despite British Government denials, it seems near certain that CR gas was used in Long Kesh.

Writing in the Observer newspaper in January 2005, Craig Morrison and Martin Bright declared:

“The British Government secretly authorised the use of a chemical riot control agent, fired from aerosols, water cannon or dropped from the air, to be used in prisons [in the North].”

Citing papers from 1976 released under freedom of information legislation, the journalists said “the use of ‘CR’ or dibenzoxazepine – a skin irritant 10 times more powerful than other tear gases – was permitted from 1973 to be used on prison inmates in the event of an attempted mass breakout”.

Chris Kelly concludes that research shows that the British Government’s official line – that only CS gas was used in Long Kesh in October 1974 – is false.

Jim McCann and those other ex-POWs say the operation to use CR gas was authorised under guidelines codenamed “Snowdrop”. British Government documents obtained by them quote an A. W. Stephens, Head of the British Ministry of Defence’s DS10 section, describing Snowdrop as “the contingency plan developed to deal with hijacking and other serious armed terrorist incidents” with members of the SAS, transported in helicopters, trained to carry out the operation.

It is clear that all the elements needed for the British to ‘field test’ CR gas existed in Long Kesh in October 1974.

That 35% of those interviewed by Chris Kelly for his research have reported major lung problems, 12% to 15% of the prisoners in the camp at that time have since contracted various forms of cancer (including leukemia and other lung diseases) raises serious questions for the British Government.

Experience tells us these answers will be a long time coming but Jim McCann and his comrades among the ex-POWs aren’t giving up. 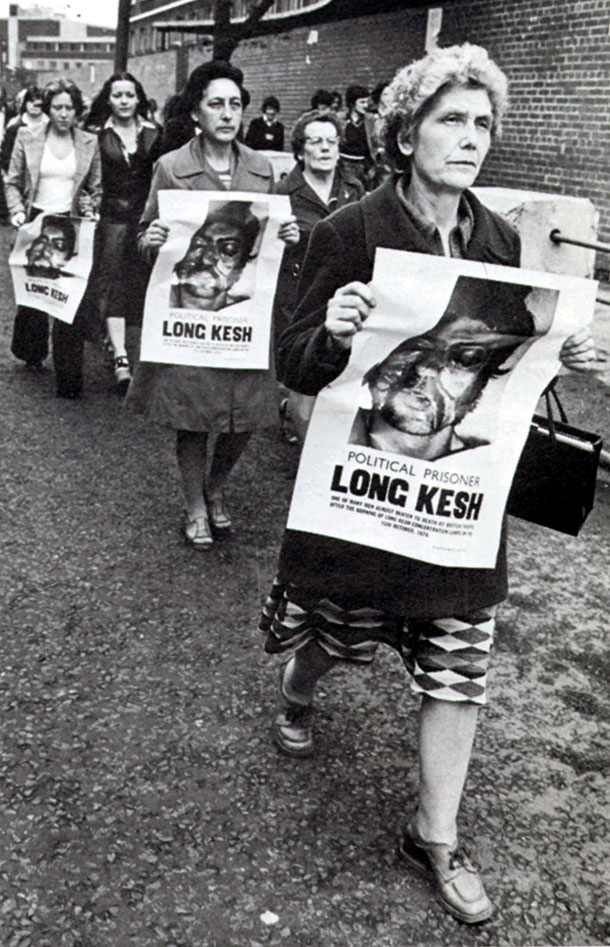 • Campaigning on the streets against the brutal treatment of political prisoners