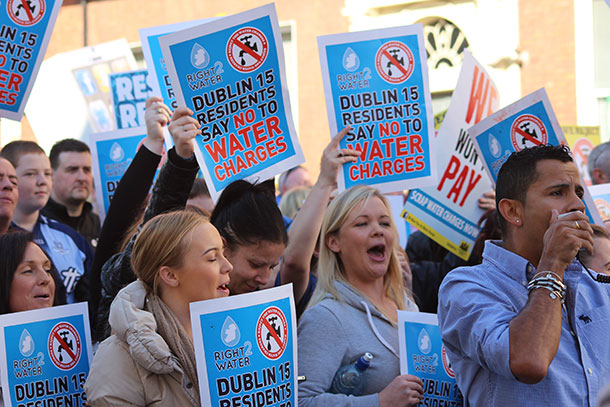 • Members of the Dublin 15 ‘No to Water Charges’ campaign

THE SIGHT of an estimated 100,000 people marching through the capital city in opposition to water charges panicked the Government and forced them to announce a €100 tax credit relief plan in Budget 2015 in a desperate attempt to soften the impact of their unfair tax on hard-pressed families.

But the Right2Water campaign, which organised October’s huge protest, says this move is just the latest blunder in the Government’s shambolic water charges policy. A spokesperson told An Phoblacht:

“Clearly, the Government is out of touch and has underestimated the anger at these unfair water charges. When you factor in that the tax credits will apply in retrospect (meaning nobody will benefit next year) it will mean our campaign will only grow and grow.

“And make no mistake – water charges will be the number one political item in the run-up to the next general election.”

As An Phoblacht goes to print, more than 42,000 people have signed a petition by Right2Water Ireland (www.right2water.ie) calling on the Fine Gael/Labour Government to scrap domestic water rates.

Right2Water cites no less a body than the United Nations General Assembly as a foundation for its campaign. 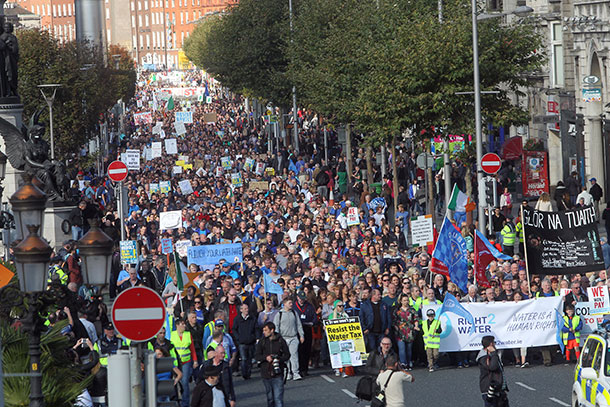 The UN has passed a motion that “Recognises the right to safe and clean drinking water and sanitation as a human right that is essential for the full enjoyment of life and all human rights.”

(Bizarrely, given Fianna Fáil’s public position now, the then Fianna Fáil and Green Party Government was one of 41 states that abstained from supporting this motion in 2010.)

While the Fine Gael/Labour Government claims that water charges are a necessity, Right2Water says all they will do is increase poverty and damage the economy.

The new charges will have an immediate direct effect of reducing consumer spending with the Nevin Economic Institute estimating that this could cost up to 2,500 job losses.

The campaign says that all the move to water charges does is create a new type of poverty – alongside food poverty and fuel poverty we will now have water poverty. 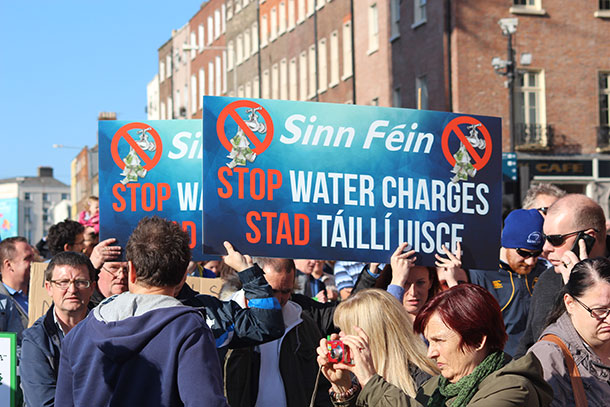 The ‘neutral Budget’ adjustments now see more than two million people facing an increase in their overall taxes despite the Government’s boast of tax cuts for the so-called “squeezed middle”.

Councillor Daithí Doolan, a Sinn Féin representative on the Right2Water Campaign, says the campaign has a long-term strategy and that it wants to make water charges the general election issue:

“We believe water is a human right and that water charges are wrong. We were absolutely blown away with the size of the march in October and we want to build on that. We will campaign and put pressure on politicians that these unfair and unjust water charges must be scrapped.”

There are also serious concerns that Irish Water will be sold off to private companies for profit. The establishment and management of Irish Water to date has been an unmitigated disaster. 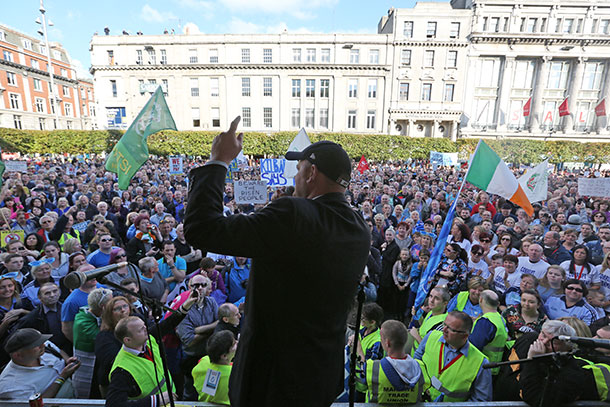 Gerry Adams TD says Sinn Féin “will oppose tooth and nail any attempt to privatise water services” with the party saying Irish Water cannot remain as the utility responsible for the delivery of water services in its present form.

“The company is toxic,” says Mary Lou McDonald TD. “It must now be radically reformed into a single utility that acts in the interests of our citizens.”

With news that almost one million households had refused to register with Irish Water with just ten days to the original 31 October deadline, what is the Right2Water campaign’s position on payment?

“Right2Water’s position is that it is up to individuals, political parties and campaign groups to decide on this issue for themselves.

“We are not telling people to pay or not pay.

“Just because a person pays water charges doesn’t mean they agree with them – and they still have every right to campaign to have them scrapped.”

The Right2Water is a citizens’ campaign supported by trade unions Mandate, Unite, CPSU and OPATSI along with Sinn Féin, People Before Profit, the Anti-Austerity Alliance and the Workers’ Party.