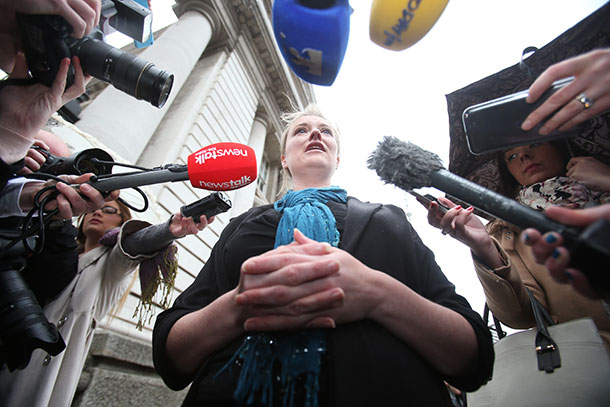 Why does scrutiny of Sinn Féin morph into an endless torrent of snarkiness, back-biting and vitriol aimed at the party, its representatives and supporters?

ONE of the most important elements in ensuring Ireland today will be egalitarian and democratic is the media that comments on, criticises and investigates how that society operates. The newspapers, radio and TV news and current affairs programmes, together with the growing number of online news services that make up the Irish media, all have a role to play in holding that society to account, as do the increasingly small number of wealthy or powerful owners of mainstream media outlets.
For republicans, being called to account by the media in Ireland and internationally has been challenging, and most Sinn Féin activists and public representatives feel the party is getting a raw deal, that the news media is decidedly biased and partisan against Sinn Féin.
Sinn Féin members want truth and accuracy in how the media reports the party’s activities but what actually happens is a combination of ceaseless attacks and criticism.
In October, the Sunday Independent reported how the Press Ombudsman upheld a complaint by Sinn Féin President Gerry Adams TD that a report in that paper was in breach of the ‘Principles of Truth and Accuracy and Respect for Rights’ in the Press Council of Ireland’s Code of Practice for Newspapers and Magazines. 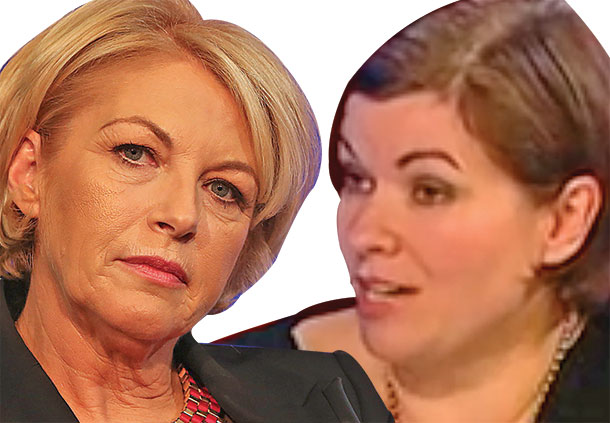 The Sunday Independent had wrongfully claimed that Gerry Adams had “tried to gag” the paper. However, in that paper’s same edition there was no fewer than 13 other articles criticising Sinn Féin and its elected representatives, principally Gerry Adams and Mary Lou McDonald, in respect of the allegation by Maíria Cahill that she was raped in 1997.
The trauma and hurt that Maíria had articulated in that day’s paper, in the previous week’s BBC TV Spotlight programme, in the subsequent news coverage on radio, TV, newspapers and online cannot be quantified or detracted from.
There are, though, other aspects to the news coverage that merit comment and criticism, one being the lack of a voice for the republicans scrutinised in the original Spotlight programme and the subsequent surge in media comment on the Maíria Cahill controversy.
There has been an ongoing media campaign to attack and undermine Sinn Féin and lobby continually for the resignation of Gerry Adams. Alongside this is criticism of other parties and groups who do not measure up to those critics who do not want Sinn Féin in government or even in elected office, whatever the voters want.
The Sunday Independent (19 October) accused RTÉ of allowing Sinn Féin “a soft ride on Cahill case”. Liz O’Donnell gets castigated for her views made in an Irish Independent article earlier that week on “low blows against Sinn Féin”. This becomes “Liz O’Donnell’s lazy reflections”. Is this really how the news media in Ireland sees its role? 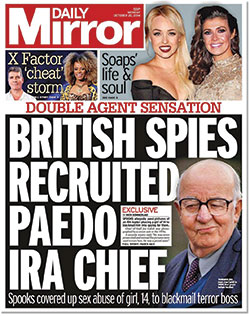 The Daily Mirror jumped on the bandwagon with a front-page headline on 20 October claiming: “British spies recruited paedo IRA chief”. In this case it was Joe Cahill, a grand-uncle of Maíria. The article’s anonymous sources included unnamed “intelligence sources” and an unnamed “senior IRA source”.
It’s a strange world where supposed IRA sources are prepared to talk to the Daily Mirror and surely it would have made more a news splash to make these allegations when Cahill was alive?
Alison O’Connor in the Irish Examiner of 24 October asks: “Why is Gerry Adams still the leader of Sinn Féin?” The Irish Times editorial of 21 October calls on Sinn Féin’s public representatives to show that they “are not just the dupes of the Sinn Féin machine”.
A Sunday Times editorial (1 June) titled “Parties need to burst Sinn Féin’s electoral bubble” advises: “The Coalition needs to spend its remaining term of office nailing Sinn Féin’s economic lies.”
The Sunday Business Post the same day flagged an article on the front page titled: “How Sinn Féin will destroy your pension”, while the Sunday Independent had “Sinn Féin searching for soft coalition partners.”
It is entirely right that Sinn Féin’s actions and policies be subject to rigorous scrutiny but why does this supposed scrutiny morph into an endless torrent of snarkiness, back-biting and vitriol aimed at the party, its representatives and supporters?
The last and perhaps most important words go to Dolan O’Hagan, Executive Editor of the Irish Examiner. He wrote on 22 October:
“The time has come to stop the political point scoring . . . What is at stake is far more important than that. For a truly better and shared Ireland the debate and commentary must centre on the issues and policies that will shape our future, not the issues and dysfunctions that shaped our past.”