EDITORIAL: DUP looking over their shoulders – Who's behind Peter Robinson? 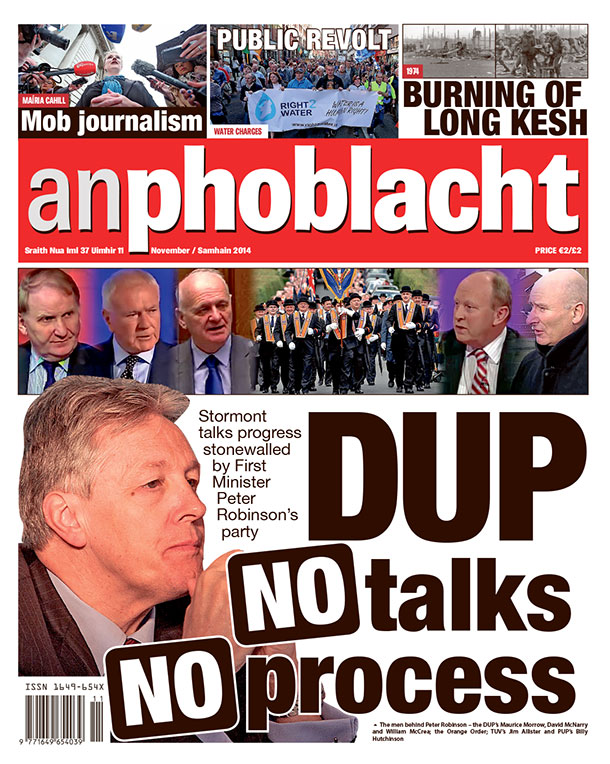 The DUP is dictating Villiers’ and the NIO’s approach.

THE Democratic Unionist Party are looking over their shoulders at their newly-unveiled allies in the ‘pan-unionist front’, including the ‘political advisers’ to the UVF and the UDA. Sitting alongside them at their strategy meetings are the unelected Orange Order with UKIP and a Traditional Unionist Voice party that likely goes to bed dreaming of a return to a unionist one-party Orange state before the Civil Rights campaign.

That’s why there’s political gridlock at Stormont despite the best efforts of Sinn Féin and, it must be said, the SDLP, the Alliance Party and the Green Party.

David Cameron hosted a lavish reception in the Downing Street garden exclusively for the DUP in May.

Nine days earlier, on the BBC, the British Secretary of State talked down a role for the US administration and explicitly excluded the Irish Government from a role in discussing ‘Strand One’ issues.

She represented her role as that of a facilitator rather than a talks participant.The DUP is dictating Villiers’ and the NIO’s approach.

The British Government’s pandering to unionist intransigence damages the political process. It undermines the Good Friday and other Agreements’ process and principles, and it strengthens the ascendant unionist anti-Agreement axis.

Republicans have no confidence in the commitment of the British Government to the political process.

This British Government should be part of a pro-Agreement axis, and it is not. While that remains the case, the extremists will set the political agenda.

There must be no diminution of the Irish Government’s co-equal involvement in these talks. That would be a subversion of Irish democracy.The political process and institutions must be robustly defended and sustained.

Trilateral Irish, American and British Government commitment to the Good Friday Agreement political model and momentum is critical to the success of these talks.