The GPO and ‘Germany calling’ 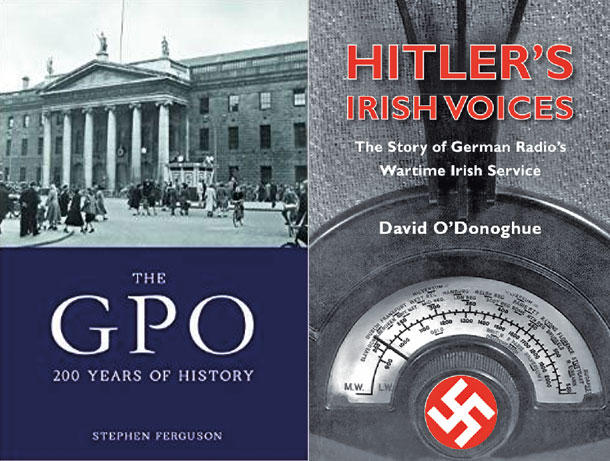 The author’s obvious glee at finding passing references to past postal practices in obscure, rarely-read novels is so manifest that it comes across as charming rather than slightly odd

IT’S INTERESTING to note that the word “postal” has completely different connotations on opposite sides of the Atlantic. In the USA, “going postal” now refers to outpourings of rage and violence in a spontaneous release of long-suppressed aggression. It is a manifestation of repressed passion and fury. In Ireland and Britain, on the other hand, the study of all things postal is seen as a refuge for those wishing to escape the strenuous rigours of more exhilarating pastimes such as train spotting or collecting matchbox labels.

Stephen Ferguson’s new book on the 200-year history of the GPO, and by extension the entire Irish postal service, combines the passion of the American view without the homicidal killing sprees, with the mundane blandness of the European viewpoint. He infuses the book with an enthusiasm and encyclopaedic knowledge that ensures it never strays into the vast expanse of mind-numbing tedium that would be the normal lot of a history of the provision of postal services. You would definitely want him on your pub quiz team but you might think twice before inviting him to your party. You find yourself actually enthused by the book. The author’s obvious glee at finding passing references to past postal practices in obscure, rarely-read novels is so manifest that it comes across as charming rather than slightly odd.

From a republican point of view, the GPO is obviously the iconic symbol of Irish rebellion. The history, the building, the ideals and events are all fused into this three-letter acronym. It is not merely a building of historic significance. It is in itself the physical embodiment of the spirit of 1916 which inspired generations. This book is not an examination of the GPO’s role in Easter Week. The entire chapter on the Rising takes up only 36 pages out of a 216-page book, and a large part of that concerns the reaction of Post Office staff, the exploits of the Post Office Engineering Department and their struggle to maintain a service whilst under siege. There are countless other volumes which consider the political and historical narratives. This book is a history of the building, not the symbol.

This is an incredibly lavish little gem, printed on the finest quality paper, and stuffed with photographs on every page. It is without doubt a quirky little volume which transcends its niche market and presents a surprisingly interesting read for the general reader (although it probably would help if you do wear an anorak).

WHEN ONE considers German propaganda broadcasts of the Second World War, the first name one thinks of (apart from Propaganda Minister Goebbels) is Lord Haw Haw, better known as William Joyce.

Black and Tan wannabe, informer and devout fascist and Nazi, Joyce’s Irish connections are well-known but he was still primarily associated with broadcasts to Britain. Hardly anyone will remember that there was also a dedicated propaganda service broadcasting mainly in Irish but also with some English-language programming aimed solely at Irish listeners.

The Irish-language service was established by  two German academics, Adolph Mahr and Ludwig Mulhausen, both of whom had lived and studied extensively in Ireland. Both were fluent Irish speakers.

Adolph Mahr is still regarded as “the Father of Irish Archaeology” and had been appointed by de Valera as Director of the National Museum of Ireland in 1934. He left Dublin on a leave of absence from his museum post in 1939, ostensibly intending to return to his post at a future date but he was never to return. He was, in effect, the de facto head of all German broadcasts to neutral Ireland from 1941 to 1945.The investment of such propaganda resources to a neutral country is unusual and shows the importance the German authorities placed on Irish neutrality and, specifically, the denial of the use of the Treaty Ports to the Royal Navy for Atlantic convoy operations.

The second main objective of the operation is much less straightforward.

There was a deep antipathy in Berlin to President Roosevelt and it was decided to do all possible to prevent his re-election for a fourth term. The reasoning was that an alternative candidate would be more amenable to German peace overtures and likely to be less hawkish both in the prosecution of the war and in any subsequent peace settlement.

To help achieve this, it was proposed that major ethnic minorities in the USA (such as the Irish, Italians and Polish) would be targeted by encouraging their families in their homelands to persuade the emigrants to abandon Roosevelt.The broadcasts themselves were a mix of news, analysis, historical reviews of the Tan War listing what it called “British terrorism in Ireland” and “Black and Tan atrocities”. This was interspersed with traditional and folk music programmes.

This book is a forensic analysis of the events and characters associated with these Irish broadcasts. A staggering amount of research has been incorporated into a most readable volume chronicling the lives of an extraordinary cast of characters in one of the forgotten but fascinating operations of the Second World War.