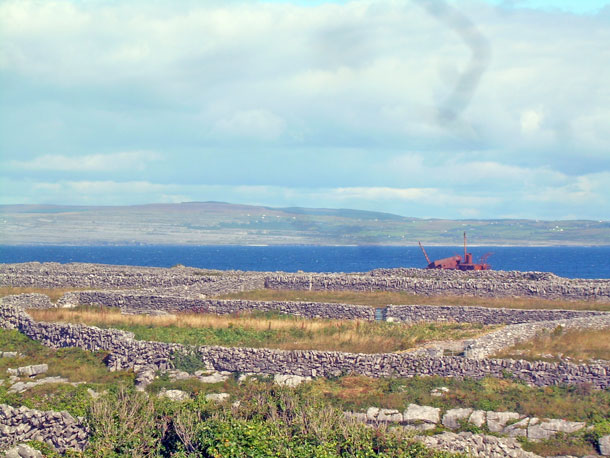 “The way I look at it, the island has built itself up for tourism, whether we like it or not. I don’t like mass tourism at all. It has been proved to be bad for every area it is in. It brings out the worst in human nature; there is too much money and greed"

THERE’S WIND on the much-needed rain.

Outside, the hollow breeze flaps like sheets to a bodhrán beat.

Inside, it is colder than it has been all weekend.

The abrupt change in the weather, from Provençal warm to Galway chill, portends the end of summer, the gradual winding down of the long season, the return to school, the beginnings of uncertainty.

For now, the future is another place.

The curach race has finally been run, two weeks later than planned, and the lads in their waking slumbers relive the crucial moments on the sun-splashed surf. The two nights of film premieres at Áras Éanna, the island’s art centre, have energised those with radical sensibilities, and plans of future action are being discussed.

The staff at Ruairí’s pub are oblivious to bigger things, knowing that in a couple of hours they will be drenching each other in buckets of ice and water for appropriate causes.

And down at the pier, the pony-trap drivers contemplate another day in the saddle, wondering whether the day-trippers who will arrive on the ferries from Doolin and Rossaveal will want a ride up past the beach, playground and campsite to the graveyard, the old fort and ring walls, and the sweep of the island round to the shipwreck, back along the warm tarmac between narrow fields surrounded by limestone walls, and timeless memory!

Island life is a cross-cultural diverse experience, for islanders, tourists, visitors and wanderers. Almost everyone finds what they expect to find. Simona from Kaunas finds Sandy from Finora, Maureen from Connemara finds Margaretta from Galway, Bríd from Inis Oírr finds Ben from In Between — and they revel in each other’s distinctiveness, finding solace in shared similarities, acutely aware of the relationships of knowledge and power that connect them.

Every moment of the day brings new and renewed connections, especially among those who are sensitive to the ever-changing challenges facing native speakers, who are increasingly bilingual with the vernaculars of the two languages. 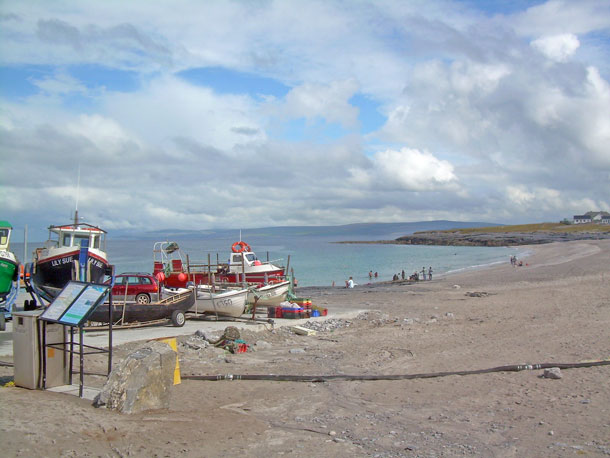 • It is estimated that 180,000 people visit Inis Oírr every year

On Inis Oírr, English and Irish do not exclude each other. They intersect. “Which language do you think in?” Bríd asks Ben. The answer is at first vague, then obvious.

The process of thinking continues with communication, when the dominant language takes over. It is how language is used that matters, they agree.

Bríd, who teaches the Irish language through Feicim, and Caomhán, the outgoing headmaster of the island’s secondary school, worry about the language. “It is being threatened here,” Bríd says.

“When a third of the population speak a dominant language, the native language is gone within a few years,” Caomhán says.

No one who really cares wants Inis Oírr to be another vanishing Gaeltacht.

PEADAR, a crewman on the Rossaveal ferry, is as worldly-wise as anyone on Inis Oírr. He has seen the gradual changes throughout his lifetime, the drystone wall building, field making and farming in the 1930s, the fishing boom in the 1940s, the migrations to America and England in the 1950s, the Irish language work that boosted incomes in the 1960s, modernity in the 1970s, the ferries from Doolin and Rossaveal in the 1980s . . .

“The infrastructure grew and grew and grew. Now you’d have to say tourism is the only employment. Fishing is only a pastime; one or two lads might make money from the lobsters. There’s no money in cattle.

“I get annoyed the way the island is run,” he says belligerently.

“The way I look at it, the island has built itself up for tourism, whether we like it or not. I don’t like mass tourism at all. It has been proved to be bad for every area it is in. It brings out the worst in human nature; there is too much money and greed.

“You’d like to ask why they come here,” he says ironically of the day-trippers, wondering what would happen if the quality of the beach was impaired and Sandy, the bottle-nosed dolphin, wasn’t there to attract them. 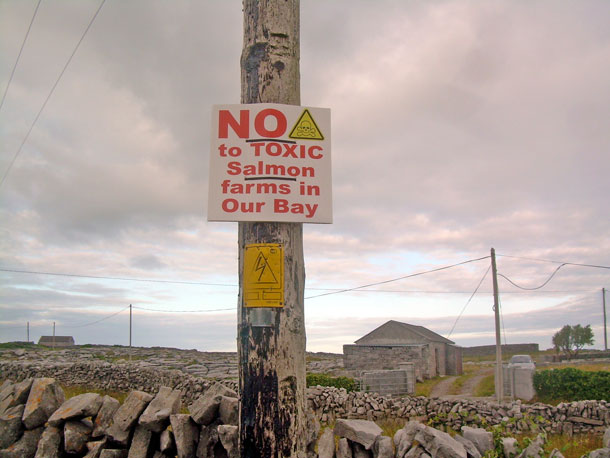 He believes that cultural tourism based on sustainable activity would be more suited than mass tourism to the needs of every single person on the island.

“A big problem here, the heather will take over the fields,” he says obliquely, not alone in believing that something must be done about the land that was made with sand and seaweed, sweat and tears, and an eye into the future.

MULTI-TASKING is normal on Inis Oírr. Paddy manages the co-op and occasionally skippers a ferry. Without the tourists he insists he would be out of a job. A native of Clare and an islander for over 40 years, he feels privileged to be part of Inis Oírr society.

“I tell tourists this is the most beautiful island. I think it is paradise. There is an aura about Inis Oírr; people you meet, they find it magical,” he says, understanding their empathy with its uniqueness.

“I remember the first day I stood on the beach and I felt the silence. People do feel at peace when they come here. You can get away and think. For such a small place it gives people space.” 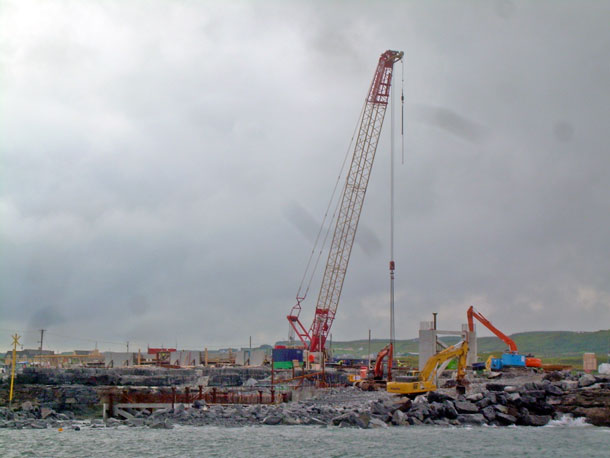 • A new pier under construction at Doolin

Liam, who runs O’Brien Line with his father Bill out of Doolin Pier, and Joe, who runs the rival Doolin2Aran Ferries, estimate that around 180,000 visit Inis Oírr every year.

Irish tourists stay an average two weeks, taking houses, and come for weekends, usually for events in Áras Éanna. The day-trippers and over-nighters are generally foreigners who rarely stay more than one night.

These make up the majority of tourists to the island. When the sky is blue they lounge on the beach; when the sky is grey they ride a bike, take a pony trap or find their way into the magical heart of Inis Oírr.

DANNY, in Áras Éanna, is pragmatic about the island’s cultural centre, the only purpose-built arts centre in the Gaeltacht.

“We are glad to be surviving,” he says, knowing that without the Irish tourists in the summer months they might struggle.

Áras Éanna is known colloquially as “The Factory” (because of its past as a weaving set-up), but to the core group of islanders who frequent its events it is a cultural nirvana.

“For a lot of people it is their night out,” he says of the 70 or so local savants who support the centre. “A lot of nightlife here is pub-oriented, and not everyone wants to stay in the pub all night.” 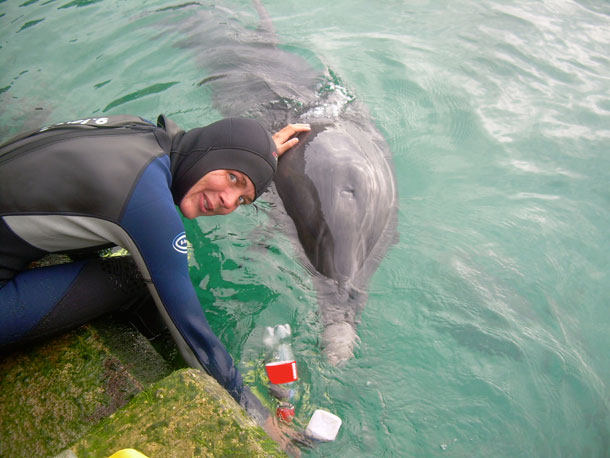 •  Simona from Kaunas meets Sandy the dolphin, a resident of the seas around Inis Oírr

During the 2014 season, Áras Éanna featured singer-songwriter Seán Tyrrell, acoustic three-some Farriers, puppeteer Pat Bracken, impressionist Oliver Callan, Steve Blount and Janet Moran in Fishamble, Peter Sheridan in Break A Leg (about his life in theatre in the 1960s and 1970s) and Margaretta D’Arcy’s films, among many others.

The Áras Éanna artists-in-residence programme, which attracted visual artists in the noughties and song-writers in recent years, is now geared towards stone sculptors in an attempt to celebrate landscape life and re-establish old traditions.

Caitlín, who works in Cleas Teo in the opposite block, knows how important stonework is to the island’s image. “Our walls would be a little bit like Connemara ones if they were built with boulders eroded from the sea,” she explains. “It’s sharp limestone here that has been cleared from the field. The walls were always being knocked down and you learned from a young age how to work with stone.

“The children here, I really notice from the age of 3 or 4 their sense of space of exactly what would fit, like making jigsaws. Just one look and they would know. Their spatial development was really very good, their instinct for it, but I think it is going now.”

THE PEOPLE of Inis Oírr certainly have a very strong sense of place but it is their sensitive sense of identity that is under threat. Fionnan, who runs a craft shop with his parents, sees that threat for what it is — potential loss of jobs from conflicting development. 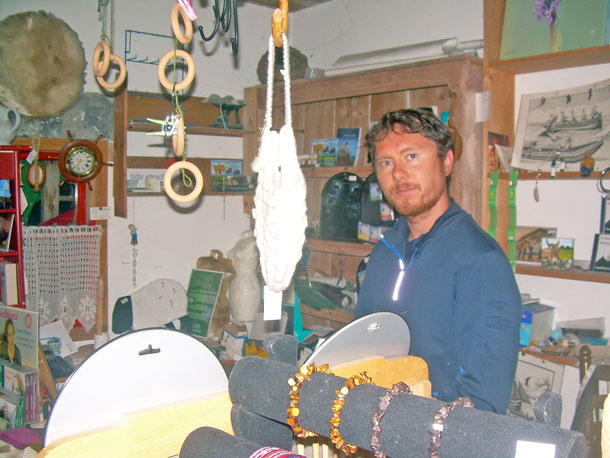 •  Fionnan, who runs a craft shop, says tourism is extremely important to the island

“We are talking about hundreds of jobs that are integral to the island,” he says forcefully. “We cannot exist without those jobs. The peace of mind you get when you know the summer is there, that a big number of tourists are coming, bringing in revenue, that’s extremely comforting and important to the well-being of the island.

“If that is threatened that is a big, big danger, especially to the younger population. Without the knowledge that you are going to be guaranteed jobs for a good part of the year, that is going to have a devastating effect on the young.”

THE PIER embraces comings and goings. The movement of day-trippers, returners and weekenders gives the island an ephemeral quality that is more positive than negative.

Leave-takings are an altogether different experience.

The population of Inis Oírr has remained stable at just under 300 for more than a century, despite the migrations of the 1950s.

There 18 pupils in the primary school, 31 pupils (12 on transition scholarships from the mainland) in the secondary school, and a constant influx of Irish-language students, young and old.

Those who love island life (especially during the months between March and October when there is good craic) expect to stay. 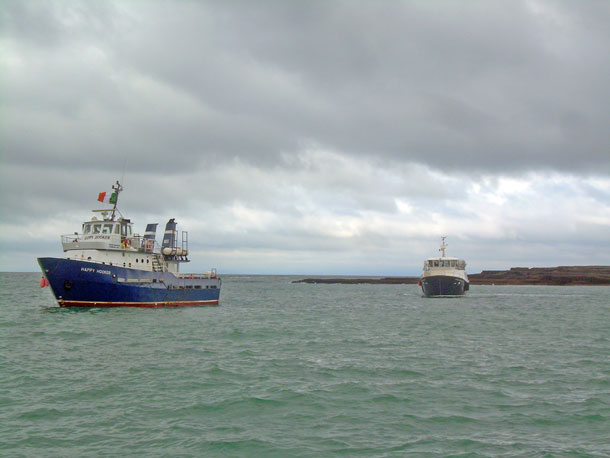 • Day-trippers arrive on ferries from Doolin and Rossaveal

Why should they go? “Instead of having to go to other countries and meet people of other cultures,” says Caitlín sanguinely, “we get them to come here and put the expenses on their shoulders, not ours, and we get a sense of their cultures.”

This cultural exchange, albeit on a localised level with the people of Connemara and Clare until the 1960s, has always taken place. “When I listen to my father, who is 97, the same thing was happening in their time. They would have gone out to Connemara to sell fish and the turf was being brought in.

“When the men in the boats, the bádóireacht, came into the pubs and had one pint before they went back out, they would describe their area and the people. My father and people from here could describe in detail what that place was like from the way the bádóireacht described it to them.

“And they only needed to go to a place once to have that sense of it. Our people have always been doing that.”

There’s a remembering rain on the wandering wind but it doesn’t deter the day-trippers. They don’t have a care in the world as they step with unbelievable lightness onto the pier at Inis Oírr.