They do things differently there 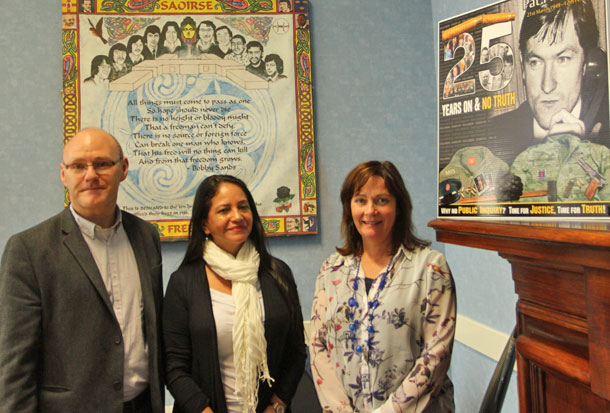 Martha lives her life under armed guard and travels in armoured vehicles. In 2010, her daughter was kidnapped and threatened

“THE PAST is a foreign country, they do things differently there,” is the opening line of L. P. Hartley’s novel The Go-Between.

The sentence kept coming back to me as I thought about the interview I’d carried out with Colombian trade unionist and human rights activist Martha Diaz.

Martha was in Belfast as a guest of the Irish Congress of Trades Unions to highlight the imprisonment of trade union leader Huber Ballesteros, who was arrested in August 2013. He has actively defended the rights of Colombia’s peasant farmers and promoted increased equality in the South American state. At the time of his arrest he was involved in organising strikes and protest action across the country. His arrest is a clear and unashamed attempt by Colombian authorities to punish him for his activism in defence of workers, peasant farmers and for social justice. He is being held in la Picota Prison in Bogotá.

As she recounted how her activism has lead to her living a life under the constant threat of assassination from right-wing death squads, it occurred to me that not only is the past a foreign country but the present is also dismissed as a foreign country where they do things differently.

Martha lives her life under armed guard and travels in armoured vehicles. In 2010, her daughter was kidnapped and threatened.

She became a trade union representative in her home town of Santander. She exposed corruption in the local government system and became a target of the right-wing paramilitary groups linked to the Colombian Government and right-wing oligarchy

The Western mainstream media, whose terms of reference are set by their governments and defined by their ‘national interests’, present conflicts in countries such as Colombia as struggles between democratic forces and those opposing democracy.

These conflicts are about democracy.

The West, however, happens to be on the side of those powerful elites who operate death squads, deny workers and peasants the right to a living wage, and create poverty as they use natural resources in their own selfish interests. 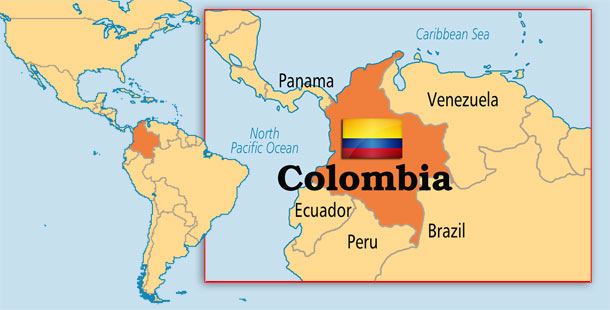 The United States has militarily and politically supported dictatorships in Latin America and South America in the guise of a ‘war against communism’ or now the ‘war on drugs’.

People such as Martha Diaz, the real democrats, are threatened when they stand up for the rights of the people and social justice; the so-called Western democracies ignore the reality.

Martha explained to An Phoblacht how the efforts being made by those in civil society, under the banner of “The Patriotic March”, are pushing the government of President Juan Manuel Santos to engage fully in a peace process that will see an end to armed conflict in the country.

The present peace talks involving the Santos government and the left-wing rebel FARC (Revolutionary Armed Forces of Colombia) opened in Havana, Cuba in 2012.

“Civil society wants the peace process to succeed,” Martha says, “but the government wants to break it.

“The present government, led by President Santos, say they want the peace process to succeed and are willing to talk to the FARC guerrillas. This move is presented as positive and a split from the extreme right represented by former President Alvaro Uribe. Santos has been more intelligent than Uribe in terms of projecting an international image but he has only changed the style in which things are done.”

The Colombian activist emphasises that human rights violations continue on a daily basis.

“More than 50 Patriotic March activists have been killed in the past two years.

“So the reality on the ground hasn’t changed much.”

The objectives of the Patriotic March are for social justice as well as political and economic reform, Martha says, “but still our demands are still being met by repression”.

“The Santos regime is playing a clever complex political game: appearing to be flexible in peace negotiations with the FARC leaders in Havana while continuing repression at home against popular civil society movements who seek reforms in their communities and maintaining a full military offensive against the guerrillas in the field.” 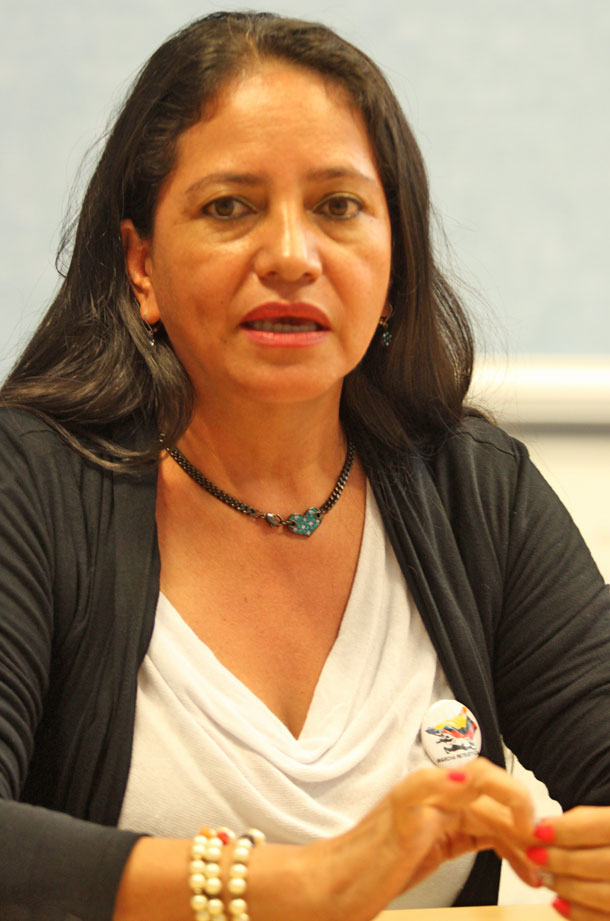 In recent years, Sinn Féin elected representatives have visited Colombia as the party seeks to promote the peace process there and support the Patriotic March’s demands for a social justice. MPs Paul Maskey and Conor Murphy have both visited Colombia and have met with people representing all sides of the conflict.

The interest shown by the party took on a new dimension when, in March of this year, Martin McGuinness flew to Bogotá.

The Sinn Féin figure and joint First Minister was invited by Santos in order to support the current peace process between the Colombian Government and the FARC but the North’s leading statesman met with all strands of opinion.

The London-based Justice For Colombia solidarity group facilitated meetings for McGuinness with opposition leaders and human rights organisations. They were keen to learn about the Good Friday Agreement process and to also share their concerns about the lack of a ceasefire and ongoing human rights abuses against opposition and civil society activists.

“It was important that Martin McGuinness met with opposition parties, trades unionists, representatives of human rights organisations and others from civil society to hear directly from them,” Martha Diaz says.

She insists it was important for him to hear the demands of these groups who are asking for a bilateral ceasefire involving the Colombian Army and FARC as previous unilateral initiatives from the guerrillas were met with military attacks.

“Also, international support is crucial to efforts to protect civil society and safeguarding left-wing politicians who are being persecuted for standing up for the rights of the people”.

Underpinning the political, social and economic injustices of Colombian society is the powerful oligarchy.

“The majority of Colombian land is owned by 3% of the population, the powerful oligarchs. They have no regard for the indigenous peoples and so we have five million people displaced internally as a result of their land policies.

“They care little for the people or the environment.”

According to United Nations research, Colombia has the third-highest level of inequality in the world.

When he visited Colombia earlier this year, Sinn Féin MP Conor Murphy witnessed at first-hand the oppression suffered by the Colombian peasants when he travelled to Puerto Vega-Teteye.

“This area has seen strike action by peasants and oil workers in recent years over the Government policies of fumigation of crops and the displacement of families to facilitate oil exploration.

“There have also been mobilisations against the environmental damage being inflicted on the area and for better pay and conditions for the oil workers. The response of the military, confirmed by human rights reports, has been to murder peasant leaders, including four in May this year.

“I heard testimony from their families in relation to those and other killings. They all told a similar story of army units surrounding their homes, removing all mobile phones from family members, and then sons or fathers being taken away and later found murdered.”

According to Martha Diaz, 36 people were shot and wounded during a recent military incursion mounted in the area to break the mobilisations against the oil companies.

If this is the democracy the West avows, Martha Diaz’s Colombia is indeed another country where they do things differently.

THE formation of the Patriotic March social and political movement was declared after a process lasting over two years in which civil society groups from across Colombia came together to analyse the most pertinent issues affecting their communities.

In the final weeks of April 2012, the predominantly grassroots-led initiative announced its formation as a political platform and mobilised an 80,000-strong rally in the streets of the Colombian capital, Bogotá.

The roots of the movement can be traced back to July 2010 when, in the midst of official celebrations of Colombia’s bicentenary, a series of rural and agricultural organisations met to reflect on the actual state of their Colombia.

They concluded that they enjoyed neither economic nor political independence, and that what was needed was a ‘second and definitive’ independence.

A series of open discussions was organised which saw people from some of the poorest and most conflict-affected regions of the country come to Bogotá to express their views on a range of themes. These included national sovereignty, social and economic rights, employment, agrarian issues, the armed conflict, and the building of peace with social justice.