Looking at our past through a lens of generosity 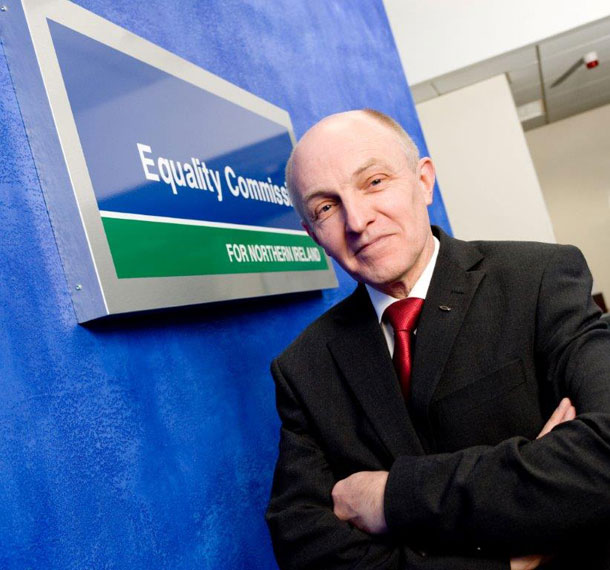 Although huge advances have been made in addressing discrimination, much still needs to be done to ensure we live in a more fair and equitable society

CONVERSATIONS involve sharing opinions, but we need to remember that opinions, however passionately held and compellingly presented, remain opinions. Too often they are presented as irrefutable facts which do not allow for an alternative point of view to be recognised.

Some of the most uncomfortable conversations I have had involve equality and good relations, two key issues which lie at the centre of building a united community.

Although there has always been a debate around how the two elements inter-relate, I do not believe that there are any who doubt the significance of both in creating a foundation for a shared society. The problem occurs either when equality and good relations are presented as alternatives, or when we insist that our exclusive understanding of what either means is the only understanding.

If we are to have uncomfortable conversations, ones that inform debate rather than close down communication, it is important that some myths around equality are dispelled.

There is the view that “it is all done”. Although huge advances have been made in addressing discrimination in employment and in the provision of goods and services through strong enforcement of the law and developing best practice, much still needs to be done to ensure we live in a more fair and equitable society. Even a brief consideration of the 3,500 enquiries we receive annually from people who believe that they have been the victim of unlawful discrimination will quickly dispel such a fanciful notion. Sectarian and other forms of harassment at work, job segregation, pregnancy discrimination and unequal pay, and unequal terms and conditions at work still need to be tackled.

There is also evidence that equality is understood by some as “one for me and one for you”, an attitude which must be challenged at every opportunity lest we collude in creating a future which is shared out rather than shared. Challenging inequalities involves addressing objective need, wherever evidenced and however uncomfortable the outcome might be for some. This will involve uncomfortable conversations amongst our political leaders who will have to take hard decisions on policy priorities in times of increasing austerity, some of which might have to deliver “two for you and one for me”!

Equality is fundamentally colour blind in that it is not more likely to be found addressing “green” rather than “orange” needs. That said, we recognise there is the view that equality is something that delivers more for one section of the community than the other. Although we can garner some confidence from our 2011 public awareness survey (where 65% of respondents expressed confidence in the Commission’s ability to promote equality of opportunity for all, with 64% agreeing that the Commission is respected by all sections of the community, without distinction by way of community background of those surveyed), work remains for us to do if we are to convince some sections of our society that equality can deliver for them as well. This task is one for all society, not just for the Commission. It will involve many uncomfortable conversations.

Too often we build our futures alone, looking only to the interest of our community without recourse to any consideration of how the drive for our equality plays out in building good relations in this place we call home.

We can’t change the past, how we believe we have been treated by “the other”, but what if the lens in which we viewed it was one of generosity?  This would involve two elements. First, a looking back and considering how we currently locate the story of “the other” in our past; and the second is to imagine how things today might have been different if we had acted in another way, if we or our community had been more generous to “the other”.

In other words, if we took time to re-examine our past through a lens of generosity, we might just be able to see how “our equality rights” might have been enhanced by including “their equality rights” and, through this process, we might be able to re-imagine a shared future in which our future narrative has a space for “their story”.

In order to reimagine the future, we need to ensure that our future embraces the needs of the “other” and so we should seek common values, common goals, the common good.

This is a big ask: to embrace the other, equally, in generosity of spirit.

Are we up for the uncomfortable conversation?

Are we up for doing things differently?