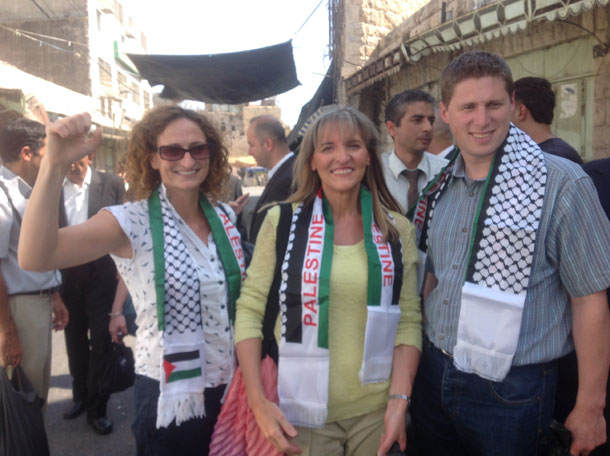 “Israel is attempting to frame the conflict as a religious one but the Palestinians’ struggle is not an Islamic one, it is a struggle for a free, equal, just, and secular Palestine.” Martina Anderson

THE 13 Members of the European Parliament refused entry to Gaza by Israel last month are not giving up, delegation leader and Sinn Féin MEP Martina Anderson has told An Phoblacht.

“We shall be writing to the Israeli Foreign Affairs Minister every fortnight and lobbying the Israeli Government until they relent and we are allowed into Gaza,” Martina said.

On being denied free movement into Gaza, Martina Anderson, who is Chair Designate of the European Parliament’s Delegation for Relations with the Palestinian Legislative Council, said:

“The Israeli Government refused us entry into Gaza on the grounds that our visit to the region is ‘not directly concerned with the provision of humanitarian assistance’. This is beyond irony considering that the horrific and harrowing humanitarian situation in Gaza is a direct result of Israel’s 53-day military attack on the Gaza Strip, which resulted in 2,145 fatalities, including 581 children, not to mention Israel’s eight-year blockade of the region.

“We want to go to Gaza to assess the situation on the ground first-hand. This would have enabled us to relay that information back to the European Parliament and push for greater provision of EU humanitarian aid to Gaza and an end to the blockade and occupation.

“We call on the Israeli authorities to overturn this decision and grant us access.”

The four-day visit began on Thursday 4 September in Jerusalem with the MEPs meeting Israeli groups. 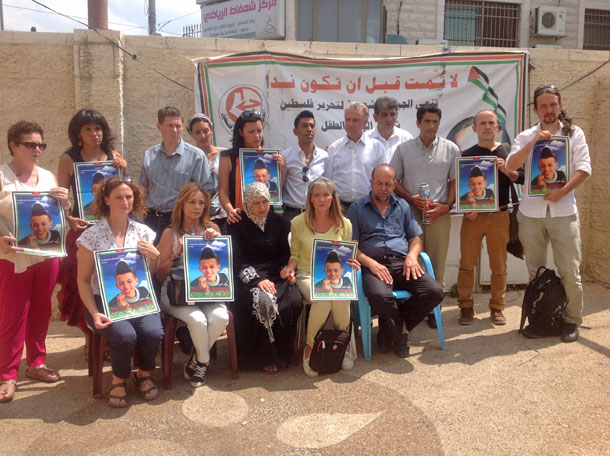 The next day they visited the UNRWA compound in Jerusalem and met Bob Turner, Director of UNRWA Operations in Gaza. UNRWA, the United Nations Relief and Works Agency for Palestine Refugees, was established in December 1949 and began operations on 1 May 1950. It now provides “assistance and protection” for some five million registered Palestine refugees.

The MEPs then visited the Al-Makassed Hospital and met many of the victims of the Israeli blitz on Gaza before calling on the family of Mohammed Abu Khdeir.

Mohammed Abu Khdeir (16) was kidnapped in East Jerusalem on 2 July, a day after the burial of three murdered Israeli teens. His charred body was found a few hours later in the Jerusalem Forest. The autopsy suggested that he was beaten and burned while still alive.

Saturday began with the MEPs meeting Palestinian Foreign Minister Dr Riyad al-Malki. Later, they had discussions with Dr Nabil Shaath of the Fatah Central Committee and then a working lunch with members of the Palestinian Legislative Council (Parliament).

In Ramallah, the MEPs met Palestine Prime Minister Dr Rami Alhamdallah, who urged them and their governments to ensure the EU plays a more active role in finding a solution.

The MEPs left Palestine to go to Tel Aviv, where they met members of the Knesset (Israeli Parliament) from Labour and Meretz.

‘We want the world to know’

That the Israeli authorities refused to let the GUE/NGL delegation into Gaza on the grounds that the delegation was not delivering immediate humanitarian support was laughable, Martina Anderson told An Phoblacht.

“When we visited the Red Crescent headquarters in Ramallah we saw crates of urgent supplies, everything from medical equipment to mattresses to schoolbags, stacked in storage instead of being allowed in to address the urgent needs of the people of Gaza.”

The Red Crescent also sends equipment for providing psycho-social support to children. Much of these supplies are funded by donations from Palestinians in the West Bank and Jerusalem.

“We were moved by the impressive generosity of Palestinians in the West Bank, even though they are struggling themselves,” Lynn Boylan said.

“At the same time it was harrowing to view video footage of Gazans being evacuated from a hospital of distressed elderly and disabled people before it was completely destroyed by Israeli shelling and to see severely injured children receiving medical attention.” 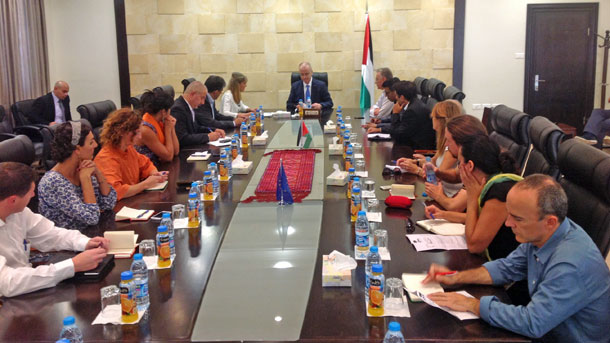 The visit to Al Makassed Hospital to meet victims was even more harrowing, Lynn Boylan said.

“To see a three-year-old child amputee was dreadful but to be told both parents have also lost limbs brought home the horror of what has happened to the people of Gaza.

“The father told us, ‘Come in, take photographs, we want the world to know.’

United Nations Relief and Works Agency (UNRWA) official Salvatore Lombardo told Dublin MEP Lynn Boylan that, in his 25 years’ experience, he has never seen such destruction as that inflicted on Gaza.

“He told us that the situation in Gaza is about five times worse than it was in 2008 and that the amount of explosives used was astronomical.”

“One point is very clear throughout this visit. Everybody here wants politicians to visit and bear witness to what has happened. Salvatore Lombardo of UNRWA, the doctors at the hospital and the parents of the injured children are pleading for the world’s politicians to visit them, to see the destruction and horrific injuries at first-hand and to tell the world. They want the world to know what has happened and they want those responsible to be held accountable.

“We, as politicians, must pass on their message and tell their story to the world while at the same time encouraging others to visit and bear witness to the horrific situation in Gaza.”

Back in Ireland, Matt Carthy MEP told An Phoblacht:

“The Israeli authorities obviously didn’t want us to see at first-hand the harrowing images of what they’ve done to Gaza but even what we did get to see was phenomenal, something I’ve never witnessed before in terms of suffering and people’s needs.

“When you think that people from the United Nations, who have dealt with war zones and conflicts all over the world, tell you ‘Nothing can prepare you for this’, that’s very strong language and testimony to what Israel has done to Gaza.

“And the volunteers working in Gaza shed tears when they tell you of what they’ve seen, and speak of the smells. That’s why the Israeli Government didn’t want to let us in.”

Martina Anderson said that, for the Palestinians, the negotiations are over.

“The Palestinian Legislative Council told us that the negotiations are over and that Israel is killing the two-state solution to achieve a ‘South Africanisation’ of Palestine.

“Israel is attempting to frame the conflict as a religious one but the Palestinians’ struggle is not an Islamic one, it is a struggle for a free, equal, just, and secular Palestine.”

“Israel continues to act in bad faith, using the peace negotiations as a smokescreen for their strategy of building more settlements beyond the Green Line and occupying ever more Palestinian territory, fragmenting the West Bank. It’s this bad faith that has rendered 21 years of negotiations a failure.

“Despite the fact the EU does not recognise any post-1967 Israeli territory as the thousands of settlements built on this land contravene the 4th Geneva Convention, Israel continues to enjoy global impunity to continue its occupation of Palestine, breaching international law with an apartheid wall, apartheid roads and apartheid buses.”

Lynn Boylan told An Phoblacht that she couldn’t believe the scale of apartheid in an era of social media and 24-hour news that didn’t exist at the time of apartheid South Africa.

“It’s shocking. In Hebron, for instance, one of the most tense areas, there are 400 Israeli settlers protected by 6,000 military and police personnel. There’s 120 checkpoints in a 900-metre stretch that schoolkids have to go through.”

Less than 48 hours after she’d left, Lynn said, she was sent a video showing a seven-year-old child detained by three soldiers at one on these checkpoints and held at gunpoint for 40 minutes “in the exact place where we as MEPs had stood in Hebron”.

The Dublin MEP told An Phoblacht that everyone they met – from seasoned aid workers to bereaved families and injured victims of the Israeli war – said that they wanted people from across the globe to come and see for themselves what the people of Gaza have to endure.

“The world must see these heart-wrenching images and we have pledged to spread the truth as far as possible about what really happened in Gaza.”

See more pictures from the GUE/NGL Delegation to Palestine: September 2014