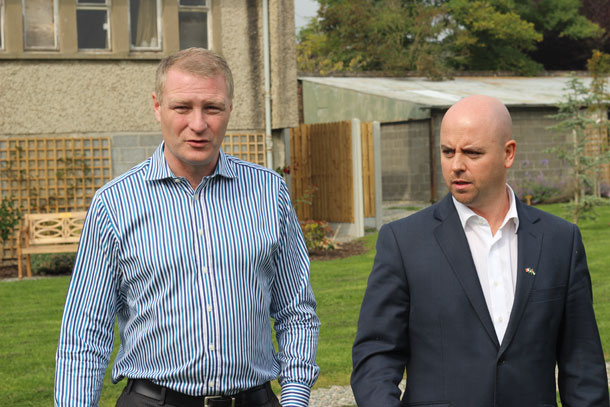 ON 10 OCTOBER, the people of Dublin South-West and Roscommon/South Letrim go to the polls in two Dáil by-elections triggered by the election of sitting TDs to the European Parliament – and Sinn Féin is fighting for both those seats.

These by-elections will be the first electoral test since May’s European and Local elections which saw Sinn Féin make a significant breakthrough in the 26 Counties. With two strong candidates selected, Gerry Adams declared to the Sinn Féin all-Ireland strategy conference in Termonfeckin: “We’re in it to win it”.

IN THE Roscommon/South Leitrim by-election, triggered by the election of Independent TD Luke ‘Ming’ Flanagan to the European Parliament, Sinn Féin has selected long-serving Councillor Martin Kenny to represent the party in what analysts predict will be a tough and closely-fought contest.

RTÉ reports that Fianna Fáil, Sinn Féin and the “Ming dynasty” candidate are all in with a chance of taking the seat.

“Martin Kenny’s a great candidate, any party would be happy to have him,” a senior figure in a rival party told this website.

First co-opted to Leitrim County Council in 2003, Martin Kenny went on to top the poll – and receive the highest vote in all of Leitrim – the following year.

Married to Helen, and with four young children, as a councillor Martin has been to the forefront of campaigns for the provision of health services in the area. The issue of ‘fracking’ (hydraulic fracturing) has also been of major local concern and Martin has actively campaigned against the use of this destructive gas extraction technique in the pristine Lough Allen basin. Many fear the introduction of fracking will damage agriculture and tourism as well as the local environment.

RTÉ reports that Fianna Fáil, Sinn Féin and the ‘Ming dynasty’ candidate are all in with a chance of taking the seat

Martin has also been a strong advocate of the rights of turf-cutters who have faced eviction from their bogs.

Martin Kenny says the counties of Roscommon and Leitrm are ones that have been neglected for decades. The people saw little benefit from the so-called Celtic Tiger while the bust after the boom has seen them having to contend with huge amounts of emigration, second-class public services and the downgrading of hospitals.

First co-opted to South Dublin County Council in 2003 when Seán Crowe was elected to the Dáil, Cathal King has become well known for being a hard-working, straight-talking campaigner who gets the job done.

Married to Kim, and with two young children, in 2012 Cathal became the first Sinn Féin Mayor in Dublin since the Tan War.

During his term the council focused keenly on mental health awareness and support for young people. The council launched the MindMindR smartphone app aimed at removing that initial stigma around asking for help with mental health issues. His term also saw the Council take the lead in tackling problems of anti-social behaviour. In November, Cathal and other Sinn Féin representatives received widespread praise for their role, along with local residents, in ending nights of serious violence between rival teenage gangs in the Jobstown and Killinarden area.

His commitment to helping the most disadvantaged in society was evidenced when he spearheaded an initiative by councillors to give up their €4,700-per-year annual expenses and instead put the money into a fund to deliver an emergency homelessness and accommodation programme in the county, which Cathal opened in 2013.

Cathal’s popularity on the ground in his Dublin South-West constituency was seen in May’s local elections when he received a whopping 31% of the vote in his Tallaght South ward. This ward had the highest Sinn Féin vote in the 26 Counties with the party taking 51.3% of first-preference votes. The party went from three seats to nine on South Dublin County Council, making it the largest party on the council. Cathal says this successful result is down to a record of hard work and commitment to the people of this constituency

“The people of Dublin South-West know only too well the devastating effects of the austerity policies of Fine Gael, Labour and Fianna Fáil. Sinn Féin is the only anti-austerity party that can win this seat,” says Cathal.

“We have proven our credentials on South Dublin County Council where we have brought in a progressive and inclusive programme to deliver for all the people in the council area.”