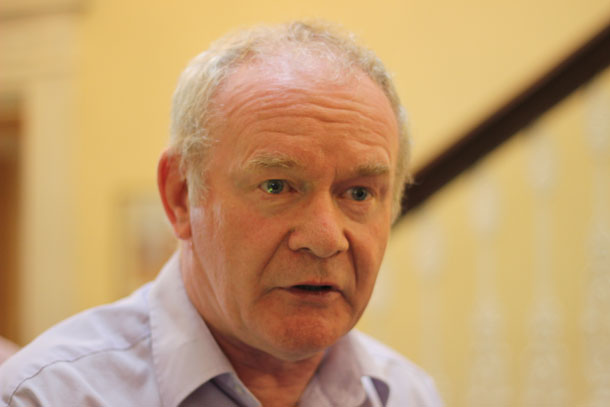 “If, for ideological reasons or in an attempt to curry favour with the Tories, the DUP wish to inflict these devastating cuts on working-class unionists as well as the rest of us, then they can and should bring the legislation onto the floor of the Assembly, explain their support for Tory policies and let the representatives of the people decide"

THE unionist parties wanting to impose welfare cuts ordered by the government at Westminster led by Tory millionaires should bring the legislation before the Assembly where it can be openly debated and voted on by MLAs in public, Martin McGuinness has said.

“That’s the democratic thing to do,” the deputy First Minister insisted.

Martin McGuinness’s keynote address on the morning of the closing day of Sinn Féin’s National Strategy Conference in Termonfeckin, County Louth, on Friday 12 September was to be overshadowed by the news just hours later of the death of Ian Paisley Snr but earlier he told a hall packed with more than 150 elected representatives and key activists:

“Let me be absolutely clear today so that David Cameron and his supporters in the unionist parties understand fully my position – Sinn Féin is absolute in our opposition to welfare cuts, north and south of the Border.

“Sinn Féin have attempted to persuade the other Executive parties to unite against these Tory cuts and to join with us in demanding the right to design a system which meets our needs as is now being promised to the Scottish people,” Martin McGuinness said, less than a week before the referendum on Scottish independence.

“It is our primary duty to protect the most vulnerable in our society.

“This is about choices for all the parties in the Assembly.

“We do have a choice. In Sinn Féin, we have made our choice.

“We reject this attack on the poor, people with disabilities and the most vulnerable in our society. We will defend and stand with the working-class communities that the Tories are targeting.

“No one in the North of Ireland voted for these vicious cuts.

“No one in the North of Ireland voted for those Tory politicians who are driving this agenda.

“If, for ideological reasons or in an attempt to curry favour with the Tories, the DUP wish to inflict these devastating cuts on working-class unionists as well as the rest of us, then they can and should bring the legislation onto the floor of the Assembly, explain their support for Tory policies and let the representatives of the people decide.

“That’s what the Assembly is for, that is the democratic thing to do.

“If Nelson McCausland on behalf of the DUP refuses to bring it to the floor of the Assembly, then the only other option is to put it directly to the people in an election.

“Sinn Féin has no fear of an election.”

The Sinn Féin negotiator said that the DUP has “thrown up” the issue of welfare ‘reform’ as “a smokescreen to the real threat to the institutions that results from the anti-Agreement axis which emerged as a result of the failure of the DUP to show positive leadership”.

“This anti-Agreement axis is opposed to inclusive, peaceful progress and the requirement for parity of esteem, mutual respect and reconciliation.”

The DUP claim that the institutions are not fit for purpose, Martin McGuinness said.

“The days of repression, inequality and discrimination are gone forever.”

The Sinn Féin figure noted that Peter Robinson and the DUP asserted that new negotiations were needed, what the DUP leader called a “St Andrew’s 2”.

Martin McGuinness said he agreed about new negotiations, convened immediately by the two governments with the support and assistance of the US administration, but added

“The context must and will be the Good Friday Agreement which the Irish people democratically endorsed.

“In any negotiations, Sinn Féin will defend that agreement and the institutions that flowed from it.”

He pointed out that the reality is that political unionism and the DUP have repeatedly walked away from negotiations and from agreements already made, rejecting the Haass/O’Sullivan proposals “and then walking out of party leaders’ talks because the Orange Order did not get its way in north Belfast” as well as dismissing the vote at Belfast City Council on flying the Union flag.

All of this, he said, demonstrates a dubious and questionable commitment by unionist leaders to negotiations, agreement and to democratic decision-making.

Martin McGuinness said he has attempted to reach out to the unionist population, not least in his engagements with Queen Elizabeth, a factor acknowledged by many grassroots unionists, he said, but with little reciprocation from the leadership of unionism.

“Sinn Féin is up for negotiations. We are willing to work with all the parties and the two governments to address outstanding issues and to build a process of reconciliation based on mutual respect.

“I firmly believe that all the problems we face are surmountable; that, given the political will, they can be resolved.

“There is no going backwards. The way forward for all in our society is inclusion, equality and power-sharing.”