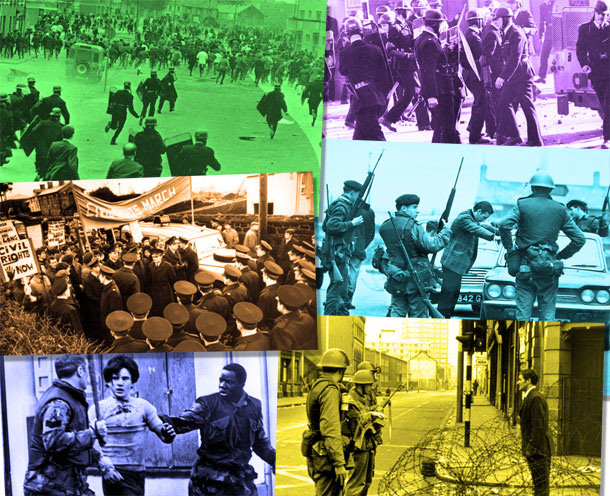 Both contributors expressed concerns about Sinn Féin spokespersons who trotted out “well-thought-through” party lines such as “there was no other way in 1969”. (Hope they weren’t talking about me!)

Now I fully accept that Martin Luther King Jnr was an inspirational leader and advocate of non-violent protest. But was the Civil Rights struggle he championed violence free? Forty years later, has it produced a society that is peaceful, equal and united? The statistics of poverty, social exclusion and disadvantage, policing and judicial sentencing policies speak loudly of an institutionalised resistance to equality and parity that continues to this day.

Nevertheless, the Civil Rights struggle in the North in the late 1960s did draw inspiration from the ethos of Martin Luther King. Republicans were active in the formation of the Civil Rights Movement and indeed provided leadership and discipline in the face of ferocious attacks by the RUC, the B-Specials and loyalists.

So could violence and counter-violence have been avoided at that time? Did the conditions that existed provide any real prospect for peaceful reform? A monolithic unionist government in Stormont was opposed to the demand for reform and both London and Dublin observed a long-standing convention of ‘hands off’ in respect of the North. A non-violent campaign was clearly the intention but in hindsight how could it have been sustained against the background of state violence and loyalist pogroms?

To argue that violence was unavoidable in 1969 is not to imply that it was the preferred option or that it reflected a predisposition to violence. Put simply, after decades of suppression, sectarian government and bad policing, the genie was out of the bottle in 1969 and no one in Government or on the streets knew how to put it back.

The debate about violent conflict will always be a matter of strongly-held opposing opinion. My own view is informed by the changes and reforms that emerged from negotiations made possible by the cessation of armed actions, governmental participation in all-party dialogue and acceptance of all democratic mandates.

The issues that had underpinned almost 25 years of armed conflict had been or were pledged to be addressed in an international agreement (the Good Friday Agreement), and most armed groups had agreed to put their arsenals beyond use and to support peaceful and persuasive means to resolve the remaining issues.

Rev Steve Stockman and Father Martin Magill wrote of hearing from Sinn Féin spokespersons a strong party line or effective soundbite but are left wondering about the substance. “We want to be talked to and not talked at. We want to be listened to and not given well-rehearsed and thought-through answers.” Fair comment. 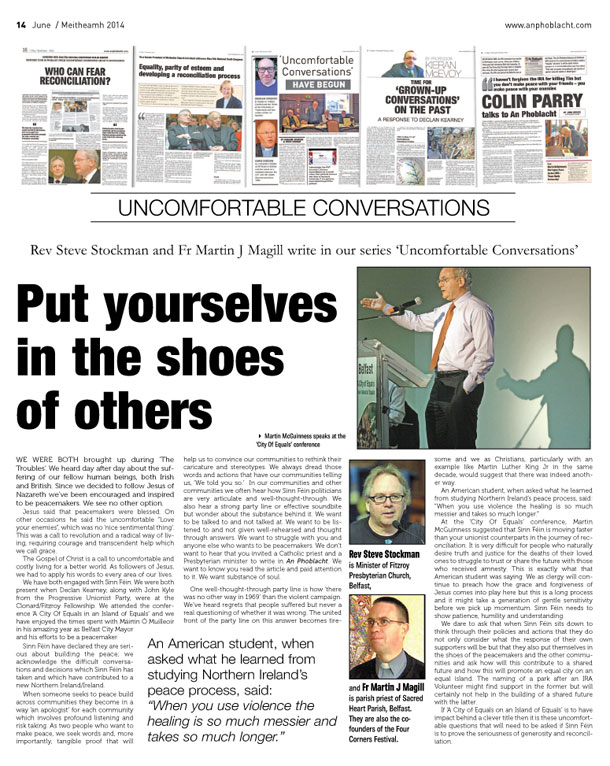 Words can illuminate and explain, can encourage understanding and awareness.

But words can confuse and obscure, can be inflammatory and dangerous.

And, yes, words can hurt too, even when we don’t intend that outcome.

I recently took part in a discussion about the challenge of dialogue and the art of effective communication in which the famous words of Bobby Sands “Our revenge will be the laughter of our children” were used to explain how a message which is clear to some can be heard in an entirely different fashion by others.

Republicans regard these words as a description of a post-conflict society in which ALL children live free from violence, injustice and fear. But could those words be interpreted differently, especially by unionists? Could they be heard to suggest defeat and humiliation for those opposed to republicanism? Instead of intended reassurance could those words, spoken without due care and explanation, have a consequence that would contradict the generosity of spirit that is typical of much of the writings of Bobby Sands?

I found myself in recent days reflecting on the observations of Steve Stockman and Martin Magill and indeed on the fall-out from Pastor James McConnell’s ill-considered remarks on Islam and pondered how many people, perhaps already deeply traumatised by personal tragedy or injury, had been unintentionally hurt again by glib or well-rehearsed responses by spokespersons from across the political spectrum over the past 40 years. How many people have shouted at the TV or radio in angry protest at explanations or answers that offered no hope of truth or acknowledgement?

Many people (and politicians in particular) should always be conscious of the potential to cause additional hurt through careless words.