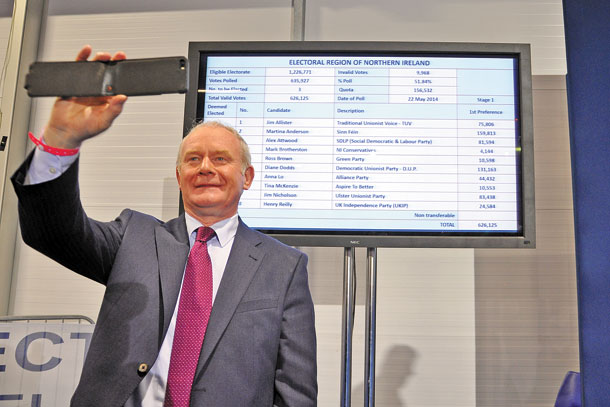 Behind the scenes, An Phoblacht talks to Sinn Féin National Director of Elections Brian Tumilty

THE ELECTION SUCCESS of Sinn Féin in May’s elections across the 32 Counties is “hugely important” for republicans, Sinn Féin National Director of Elections Brian Tumilty told An Phoblacht.

Speaking after record gains by Sinn Féin throughout Ireland, the Director of Elections said it was down to the hard work and commitment of activists across the country.

“The results of these elections are comparable to 1918 when Sinn Féin attracted the support of more than 480,000 people right across the island. That makes these elections hugely important for republicans,” he said.

“This has been a very successful election campaign for Sinn Féin in that we are going to have four seats in the European Parliament.

“We approach everything we do on a national basis, looking across the 32 counties of Ireland.

“As National Director of Elections I always make the point that the most important people in any election are the voters.

“Ahead of this election I adopted a strategy which I termed the ‘ditch by ditch’ approach. We attempted to get candidates standing in every DEA and LEA across the 32 Counties and we almost succeeded in that with only one DEA in the 26 Counties where we did not stand a candidate.

“Overall, it provided an opportunity for people right across the island to vote for Sinn Féin for the first time since 1918.

“We had a fantastic field of candidates, almost a third of who were female. A huge percentage of our candidates were under 30 years of age. People like me who have been about for a long time were hugely impressed by the injection of energy from the younger candidates and activists. They brought energy and enthusiasm to the campaign and also brought increased use of social media.

“It was heartbreaking for some of those candidates who did not get elected, particularly those who lost out by a handful of votes, but they did tremendous work to increase the capacity of the party and they deserve a lot of thanks for agreeing to go forward,” he said. 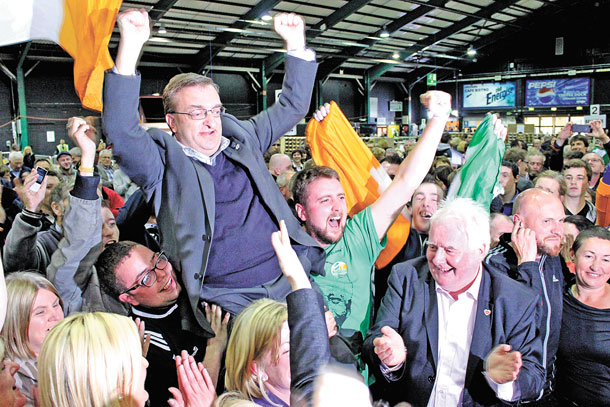 • Sinn Féin’s Mícheál Mac Donncha and Larry O'Toole are elected on the first count for the Beaumont-Donaghmede ward in Dublin City Council. They were followed shortly on the second count by Denise Mitchell to see the party take three of the nine seats in the ward

The Sinn Féin success did not come without difficulties, as Brian explained.

“Part of the difficulty that we found a year ago was the process of identifying candidates across the area in the middle of major boundary changes in the 26 Counties and that disrupted our plans across four constituencies. Those were then redrawn to three and we had to adjust to that.

“The Sinn Féin Ard Chomhairle took a very brave decision even before the outcome of the Boundary Commission’s report was published to authorise the Elections Department to identify three likely candidates.

“That was a big risk but it was one that paid off for us and the ‘best guess’ analysis was correct.

“We knew the candidates would be relatively low-profile and would not be household names like Mary Lou McDonald or Martin McGuinness and we needed time to build the campaigns around the candidates.

“Last July, more than a thousand people attended a selection convention in Sligo to select Matt Carthy and that included 800 voting delegates. We had similar numbers in Tipperary in September to select Liadh Ní Riada and in Dublin (also in September) to select Lynn Boylan.

“In the North, Martina Anderson MEP was selected in March and we had huge confidence in her ability.

“The selection of candidates and the conventions was a big part of our selection strategy. They were selected by ordinary members of Sinn Féin, not chosen centrally,” he pointed out.

Brian said the campaign succeeded because it involved activists at grassroots level right across the country.

“Another major decision taken by strategists was to delegate the running of the campaigns to the constituencies. The individual campaigns were run by the local areas and that personalised the appeal of our excellent candidates. We had very capable campaign managers who ran great campaigns in the local areas and resources were decentralised to each campaign.

“The hard work was done in the areas; we merely co-ordinated the campaigns,” he said.

The Newry republican also said the campaign for both the European and local government elections was based on Martin McGuinness’s campaign for President of Ireland in 2011.

“This campaign for the local government and European elections started in the immediate aftermath of the Presidential campaign.

“Martin’s campaign broke through the glass ceiling for Sinn Féin, winning 14% of the votes. Since then we have never fallen below that in any opinion poll. It was a huge watershed for us in Sinn Féin.

“It was also about integrating the two campaigns. There was no point in local candidates going out to canvass if they were not also canvassing for the European candidates and we saw a very integrated campaign.

“It was a hard-fought and hard-won campaign and I want to thank all of the activists right across the country who helped deliver the success.”