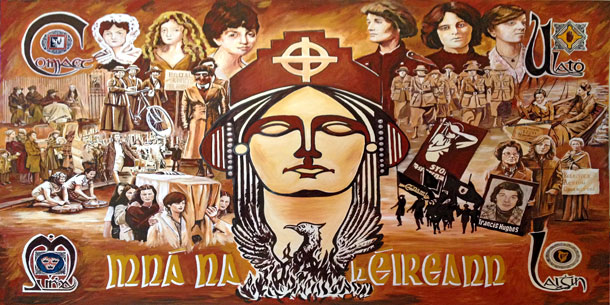 It is dedicated to all women, young and old, activists and supporters, in the past and in the present.

A MAGNIFICENT new painting to celebrate and commemorate the role of republican women throughout Irish history has been unveiled at City Hall in Belfast.

Part of the commemorations of the centenary of Cumann na mBan, ‘The Women’s Mural’ was unveiled by Belfast Sinn Féin’s longest-serving woman councillor, Janice Austin, and ex-internee Liz McKee (Maskey), the first woman internee, before a unique collection of women who came together in the Sinn Féin office in Belfast City Hall.

It is dedicated to all women, young and old, activists and supporters, in the past and in the present. 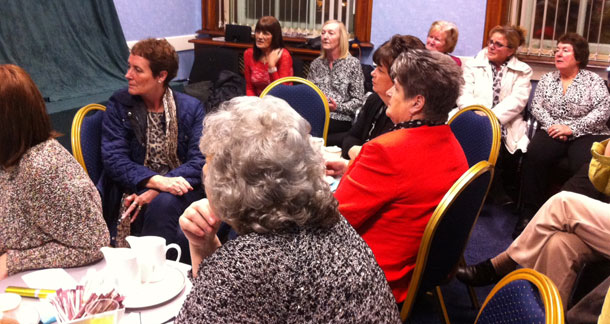 • The launch of the mural in Belfast City Hall

The gathering in City Hall, representative of many of the unnamed, unsung women of Ireland, reflected the backgrounds in the painting. They came from the four corners of Belfast and the majority had participated in different ways in the past four decades of republican struggle as far back as 1970.

This was an opportunity for them to reflect and remember what they and others had endured and their pride at having played a part in the struggle was very apparent.

The Committee of Macha’s Legacy ex-prisoners’ group would like to thank Danny for this tremendous piece of art, to those who attended the launch, and to the many, many courageous unnamed women who were there through all the hard times.

The plaque on the painting reads:

Dedicated to the spirit and courage of republican women

O high beats the heart of our Mother,

The day she had longed for is nigh,

When the sunlight of joy and of freedom,

Shall glow in the eastern sky;

And none shall be honoured more proudly,

That morning by chieftain and clan,

Than the daughters who served in her danger,

The soldiers of Cumann na mBan