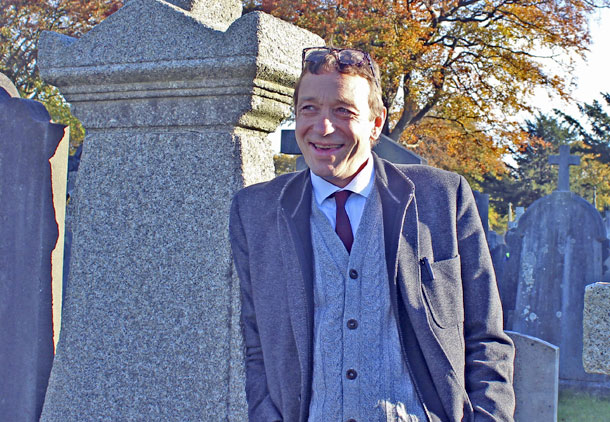 Glasnevin Cemetery historian and former An Phoblacht columnist and Sinn Féin activist Shane Mac Thomáis died suddenly on Thursday 20 March. Shane’s father, Éamonn, another noted historian as well as a broadcaster and author and IRA activist, was Editor of An Phoblacht in 1972 and 1974.

THE first time I met Shane I have to confess I did not really take to him. I thought he was a bit of a smart ass. He had a way of provoking you, questioning your pretensions, I suppose. Until you realised that he had none of his own.

My family and Shane’s had history before that. His da, Éamonn, was my uncle’s O/C in Dublin Brigade IRA in the 1950s and 1960s. So once we had established that, we were fine.

I don’t think I ever met him that I did not come away without knowing something that I hadn’t known before.

He was a mine of information on Dublin and its proud history: from the heroes that everyone knows, to unknown men and women who fell not only during our great heroic moments like 1916 and the Lockout, but also firefighters who died saving their fellow citizens from blazing tenements. Women and men of the city whose graves Shane kept and was proud to show to visitors to Glasnevin.

Glasnevin: where the Fenians sleep, as do thousands of anonymous Dubs who fought the good fight and fell unbeknownst other than to their kith and kin. Men and women who will never have stamps dedicated to them. I think Shane’s greatest pride was that he had a part in remembering those people.

In the last few months he had taken to using a photograph of Albert Camus on Facebook. There was certainly a resemblance although I would not give Camus much of a chance if there was to be a contest that rested on words and charm!

Shane probably had a difficult life. I always think of him as smiling and taking the surreal view of life and its strangeness and its difficulties. He was able to burst other people’s bubbles and challenge their notions of themselves. Perhaps he was too hard on himself in the end.

Perhaps Shane did not realise how much he was appreciated. He was a keeper of the flame of the history of the people of Dublin and of Ireland. And a generous sharer of his knowledge of that history as many people have recounted since his sad passing. And while he could appreciate the stories and journeys of the many who slept under his watch in Glasnevin, including Michael Collins, he was a Dublin republican by birth and inclination.

He will sleep where the Fenians sleep.