‘Say what you believe’ 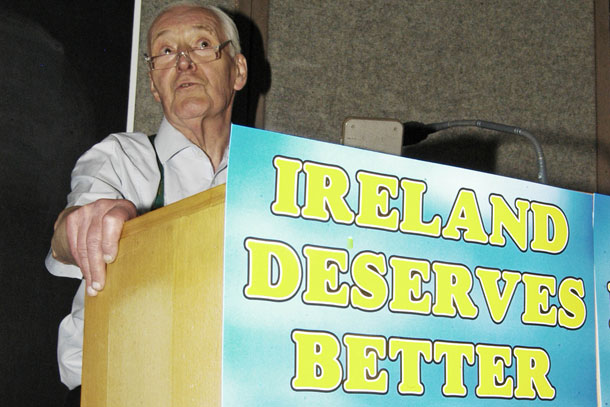 TONY BENN’S stature as an orator, a political leader, a polemicist, an intellectual and incisive prolific writer is unquestioned – except in the political party he represented for 50 years in the British Parliament.

Benn spent just over 50 years in the House of Commons. Along the way, he renounced his hereditary peerage, the privileged private education that prepared him for ministerial posts, and finally the political party to which he had dedicated so much of his adult life.

Tony Benn actively opposed British involvement in the wars in Afghanistan and Iraq as well as Britain’s NATO membership. In his diaries of the time Benn describes Blair as “a little puppet” and “just the voice of President Bush”.

Benn failed to win the leadership of the Labour Party in 1976 or the deputy leader’s post in 1981. In the 1980s, Benn became a vocal advocate of a united Ireland, supporting also the end of the British monarchy. In the 1990s he was an active supporter of the Peace Process in Ireland.

My own personal introduction to Benn came courtesy of BBC Radio 4 who serialised his diaries in their Book at Bedtime! His description of the 1976 IMF bail-out and the dying months of Labour in power in 1978 and 1979 is a must-read for any aspiring politico.

The absence of a commentary on the crisis in Ireland at that time, and Benn’s role at Cabinet, detracted significantly from the diaries. He publicly admitted his regrets in later years for not forcing Ireland onto the Cabinet agenda at the time.

In the early 1990s, with the Peace Process inching towards an IRA cessation, I was dispatched by then An Phoblacht editor, Mícheál Mac Donncha, to interview Benn.

What I encountered was the most polite, genial man, endlessly drinking tea, relighting his pipe and laughing a lot – an awful lot. In our interview (which he also recorded as he did in all media interviews after being misquoted or misrepresented so many tmes), and afterwards at the public meeting where he spoke, Benn unwrapped an egalitarian vision of what the world could be, how Ireland, Britain, Europe and beyond could live without empire, without the indulgences of exploitative, profiteering private sector companies but with and for the people. The interview and address that evening was mesmerising.

“As a principled politician and activist, he spoke up passionately for the idea of a united Ireland. Tony was a champion of the downtrodden and the voiceless in Britain, in Ireland and throughout the world.”

Benn is quoted frequently for stating “Say what you believe; believe what you say.” There is no better challenge for our political leaders today.