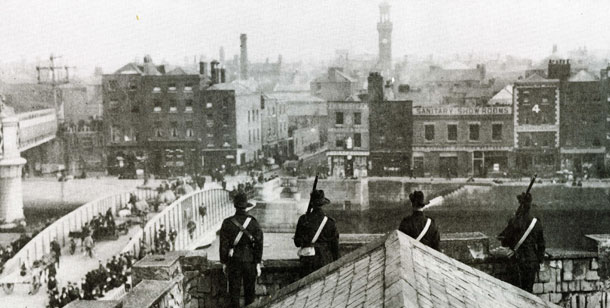 The History of the Irish Citizen Army

THIS TIMELY REPRINT by Sinn Féin of a volume first published 70 years ago is regarded as being the definitive history of the Irish Citizen Army.

The book was originally written in 1943, when most of the former membership were still alive. This has resulted in a significantly anecdotal style of writing to supplement the bare chronological history of events.

The formation of the Citizen Army in 1913 as a response to Royal Irish Constabulary and Dublin Metropolitan Police brutality during the strike and lockout is covered in detail. James Larkin’s quote of “whenever one of your men is shot, shoot two of theirs” is cited as the catalyst for its establishment following the police riots on Sackville Street. 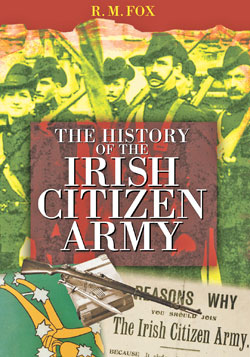 The book catalogues the changes brought about by Captain Jack White and the initial  friction between himself and James Connolly; and how, under Connolly’s leadership, it evolved from being a purely defensive militia to become an insurgent force.

Personal and inter-group rivalries were not entirely absent from the nascent organisation. Seán O’Casey was bitterly opposed to the Irish Volunteer movement and tried to force Constance Markievicz to abandon either her role with the Irish Citizen Army or with Cumann na mBan. When Markievicz refused to relinquish either role, and was subsequently endorsed by a vote of confidence, O’Casey promptly left the Citizen Army.

The early frictions with the Irish Volunteers stemmed from a perception that they were a diversion from the primary struggle for social justice. These antagonisms were gradually forgotten as the shared objective of establishing the Republic assumed prominence.

The activities of Connolly, Mallin, Markievicz and the rest of the Citizen Army over the Easter Rising are, of course, chronicled in detail.

What is, perhaps, of more note is the detailing of how the Irish Citizen Army fared in the subsequent years, and how many people assume that, following Easter Week, the Volunteers and Citizen Army merged to form what became known as the IRA.

I’m sure most people do not realise that the ICA fought as a distinct unit under its own banners and command structure throughout the Black and Tan War and against the pro-Treaty forces during the Civil War.

This is a uniquely important book, written in a very readable style, and recording the history of one of the two most important Irish republican organisations of the early 20th century.

SEÁN ENRIGHT is an Irish-trained barrister who now practices in England as a circuit court judge. This book is his forensic analysis of the aftermath of the Easter Rising, covering in detail the trials, executions and deportations that ensued.

The book has two main elements. Firstly there are the actual transcripts of the trials themselves; the majority of which were only released into the public domain in 2002.

In addition, diligent research work by the author has unearthed a further 16 transcripts, including the trials of Harry Boland and Desmond Fitzgerald, which had previously been thought lost. 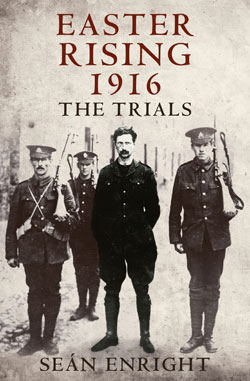 Secondly, there is a detailed analysis of the structure of the trials, covering their dubious legality, composition and form. There is also a fascinating insight into the political and military imperatives that shaped the format that the trials would take.

The actual trials themselves seem to have been formulaic, almost ritualistic affairs with a procession of repetitive stock charges, identifications and (mostly) convictions. Most trials lasted less than 20 minutes, with the accused not knowing the rules under which the trials were held. The accused were not allowed to give evidence on their own behalf, and they were not allowed to be legally represented. The farcical nature of the trials is reinforced to the modern reader when one considers that the president of one of the two standing courts martial was the unfortunately named Brigadier General Blackadder.

It was deemed essential that the trials be held in secret in order not to damage the recruitment drive prior to the Somme offensive. Additionally, there was a political awareness of the risk of inciting resurgent nationalism by public debate on the trials. This consideration, of course, was made redundant by the outrage over the executions.

The author explains the differences between ‘Summary Field General Courts Martial’ and ‘General Courts Martial’ in a way that is both intelligible and interesting to the non-legal reader, and explains why the former was adopted (probably illegally) to remove legal safeguards and protections that the accused would otherwise have enjoyed.

Enright also makes a striking comparison with the military tribunals established by the USA to try Guantanamo suspects and states that the tendency of governments to depart from due process in times of crisis must be resisted “as it is adherence to the rule of law that underpins democracy”.

All in all, a very interesting, well-researched and well-written book that casts an informative light on an often overlooked element of Easter Week.