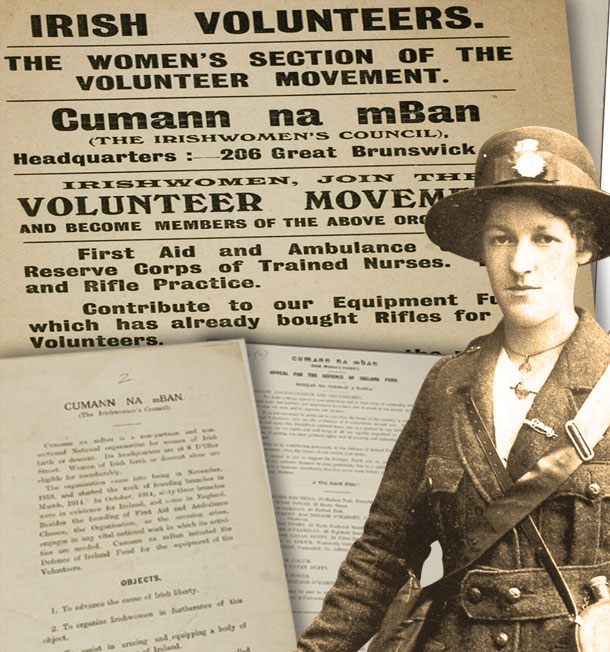 THE founding of Cumann na mBan in 1914 was an important step both in the assertion of women’s role in Irish politics and in the radicalisation of Irish nationalist politics itself.

While the place in the Irish Volunteer movement originally envisaged for women by most of the men was far from equality, the establishment of Cumann na mBan put in place an organisation that was to become increasingly militant.

In 1900, Maud Gonne MacBride had established Iníní na hÉireann (Daughters of Ireland) as a separatist group for Irish women. Sinn Féin, from its founding in 1905, admitted women equally with men. The Irish Women’s Franchise League was founded in 1908 and campaigned for votes for women while also calling for Irish independence. The Irish Women Workers’ Union was formed in 1911 and played a key role in the struggle at the time of the Great Lockout of 1913. And the Irish Citizen Army admitted women equally, including Constance Markievicz.

A large number of women attended the founding meeting of Óglaigh na hÉireann/Irish Volunteers in the Rotunda in November 1913, with a separate space reserved for them. Eoin Mac Neill told the meeting that there would be work for the women to do in the new movement. Soon after this, an informal meeting was held in Harcourt Street by, among others, Constance Markievicz and Maud Gonne with a view to organising women. One idea was to establish a Red Cross-type organisation but this was dropped when the Red Cross in Geneva stated that it would not accept affiliation from a country without a standing army of its own and it did not regard the Irish Volunteers as such an army. 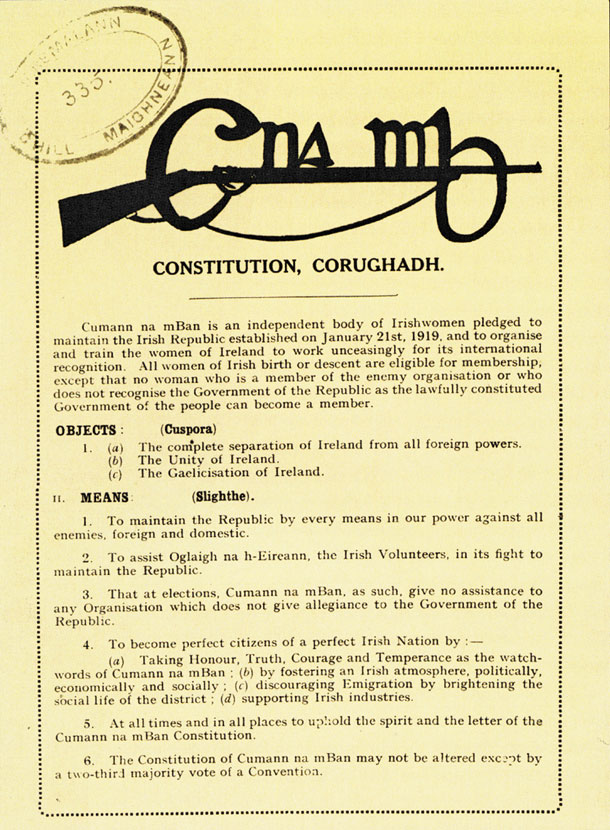 Those who eventually came together to form the new women’s organisation came from “all shades of nationalist thought”, in the words of one of the founders, Jenny Wyse Power. A range of views on feminism was also represented, with some being more radical than others.

It was in Wynn’s Hotel in Dublin’s Abbey Street that the inaugural meeting of Cumann na mBan was held on 2 April 1914. The chairperson was Agnes O’Farrelly and those in attendance included Markievicz, Winifred Carney, Kathleen Clarke, Louise Gavan Duffy, Nancy O’Rahilly and Jenny Wyse Power. Markievicz was elected first President of Cumann na mBan. The organisation’s aims were set out as advancing the cause of Irish liberty and helping to arm the Irish Volunteers.

The new organisation set about organising fund-raising events for the ‘Defence of Ireland Fund’, which was to provide arms and equipment for the Volunteers. From the start, many women in Cumann na mBan were opposed to the subsidiary role allotted to them by the men. Feminist and republican Hanna Sheehy Skeffington said some of the women at the Wynn’s Hotel meeting “thought deep thoughts on the nature of men who cannot buy a rifle unless a woman collects the money – woman, the ministering angel of the ambulance class, who provides the pyjamas and the lint, but who sinks below the human the moment she asks for a vote!”

Some women were happy with a secondary role, with one writing in The Irish Volunteer that they could form ambulance corps, learn first aid and “do all the embroidery required”. But most women wanted to claim their proper place in the movement. Mary Colum wrote in the IRB newspaper, Irish Freedom, that Cumann na mBan members were not “the auxiliaries or the handmaidens or the camp followers of the Volunteers – we are their allies”.

Cumann na mBan grew from strength to strength during 1914, with 60 branches established by October. That month, the organisation issued a statement denouncing John Redmond, who had urged the Irish Volunteers to join the British Army to fight Germany. Cumann na mBan said that “to urge or encourage Irish Volunteers to join the British Army cannot, under any circumstances, be regarded as consistent with the work we have set ourselves to do”. Cumann na mBan’s adherence to the purpose of the Volunteers and their opposition to Redmond was reaffirmed at their first Convention in November 1914.

The women of Cumann na mBan played key roles in the 1916 Rising and the Black and Tan War. The organisation opposed the Treaty and many members were imprisoned during the Civil War. In the following decades, Cumann na mBan continued to be at the forefront of the struggle for Irish freedom. 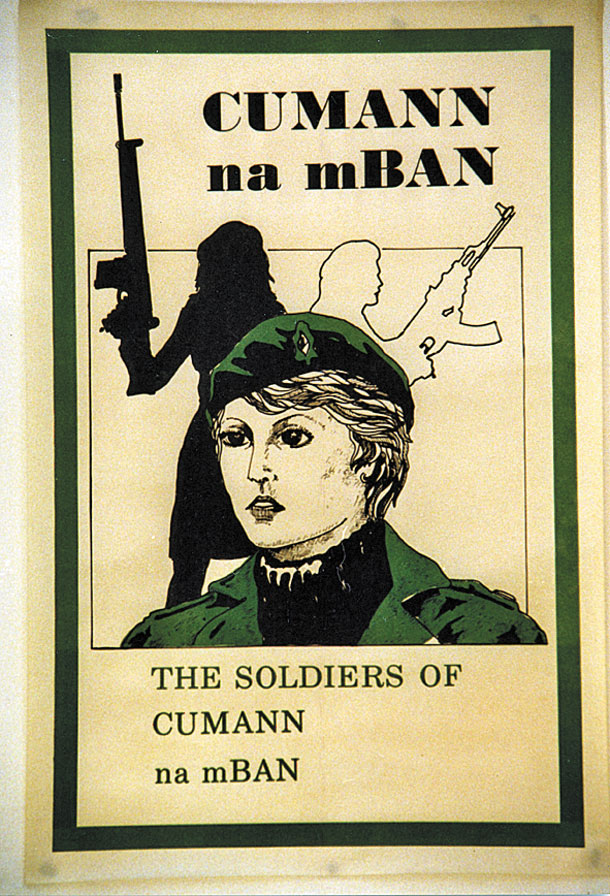