A wealth of 1916 info at your fingertips 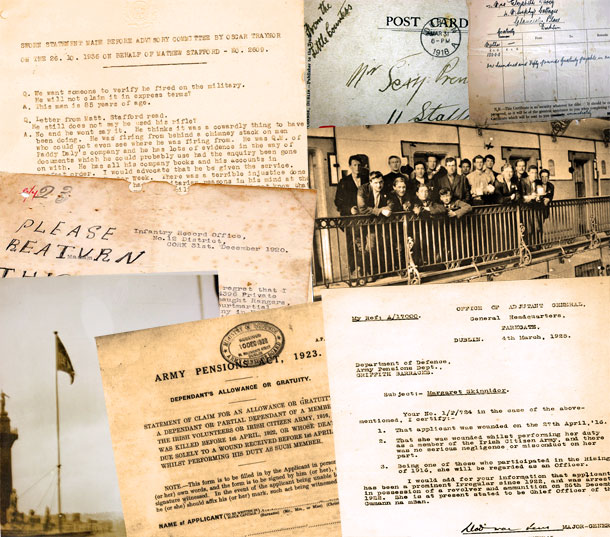 A MINE of information about Ireland’s revolutionary period began to be opened this year with the first tranche of military pension archives of 1916 participants going online.

When finally completed, the Military Service Pension Collection will see 300,000 files relating to nearly 80,000 individuals and the organisations they belonged to being accessible free of charge online.

The collection relates to claims by those Volunteers who took part in the 1916 Rising, the Tan War and the Civil War who applied for a pension. Originally active service for the Free State was required to qualify under the scheme introduced by the Cumann na nGaedhael Government to compensate Free State soldiers who were being demobbed in 1924. As such, this initial pension series ruled out those who fought on the republican side and it wasn’t till 1934, after Fianna Fáil came to power, that they could apply.

Many republicans never made a claim for a pension or a medal and their actions/activities are not recorded, though on occasion they are mentioned by their comrades in their accounts.

The online collection covers those involved at all levels of the Irish Volunteers, the IRA, the Free State Army, Cumann na mBan, the Irish Citizen Army, Fianna Éireann and the Hibernian Rifles in Ireland and abroad.

The beauty for a family member or a local historian delving into these files is that they are all searchable and can be cross-referenced with a mass of local information about actions carried out and characters who were involved or helped out.  Whether the application was successful or not, they reflect a huge level of organisation in the IRA during the Tan War and how they adapted quickly as the war developed. There was intense scrutiny of all pension claims by the board of assessors and this is reflected in the files, with applicants asked to prove “active service”. Only 18,000 pensions were awarded out of the 80,000 applications.  By clicking on military service pensions collection at www.militaryarchives.ie/collections you can gain access to a remarkable insight into the personalities of the revolutionary period and the organisations they belonged to.

Some records are among the 1,700 or so witness statements  taken between 1947-1957 as part of a state effort “to assemble and co-ordinate material to form the basis for the compilation of the history of the movement for independence from the formation of the Irish Volunteers on 25th November 1913, to the 11th July 1921”. Those records – and about 400 photographs and 2,500 documents of the period – can be accessed at bureauofmilitaryhistory