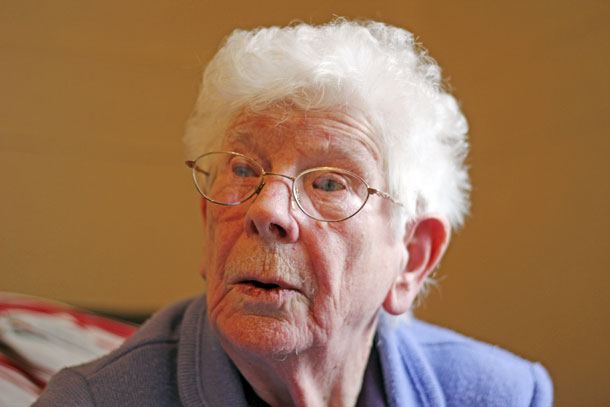 ‘I was born into republicanism. It was a great life. I never changed my principles for anybody’

MARION STEENSON (neé Murphy) is a formidable woman. She had to be. As a youthful 87-year-old, the most striking thing about meeting her is the clarity with which she recalls her upbringing in a republican household steeped in history and the fearless way in which she still espouses her beliefs without fear or favour.

When we meet in the home near Fairview Park in Dublin which she has lived in all her life, Marion tells me that she is proud of being a republican. “I was born into it. It was a great life. I never changed my principles for anybody.”

It was inevitable that Marion would become involved with republicanism. She talks particularly about the influence her mother had on her.

“My mammy was in Cumann na mBan, the Citizen Army and the Red Cross corps and she worked with Nurse O’Farrell in the Pro-Cathedral. She was an amazing woman. She was only 17.”

Marion’s mother, Martha Kelly, was active in the Irish Citizen Army in the GPO. Her father was Captain Michael Murphy, who fought in Bolands Mill, in 1916. Both are listed as taking an active part during Easter week 1916 and they are reported to have met in Kilmainham Jail while being held as prisoners.

On release they married and moved into the house which Marion still occupies. They both died relatively young, leaving 16 children (eight boys and eight girls) behind, of whom Marion raised the younger. 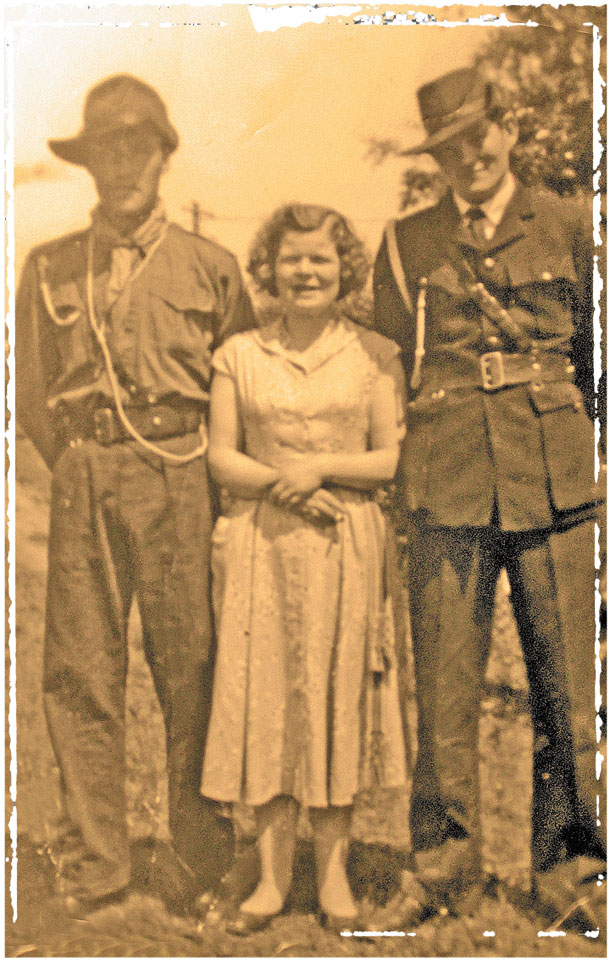 Marion recollects those early days and particularly the formative influence her mother had on her.

“There was always politics here. The [Irish Republican] Army used to use our front room at night. She never spoke of anything else. It was always politics. We were on our own here (in North Strand). But we had lovely neighbours. Actually, this was real Church of Ireland because a lot of the houses down there, artisan dwellings, they built them for the Church of Ireland.

“Everything was culture,” Marion continues. “Coiste na bPáistí for the youngsters. Get them ready for the Gaeltachts. I was wreath bearer in Clann na nGael and I danced for commemorations. Used to dance in ‘Bulfin’ for the craobh.”

“It was the same people in both. We were all just connected. I was out of school at 14. We used to go to Irish classes. My parents didn’t speak Irish. We used to go to the ceilis. Outside I always spoke Irish. We’d go out to the mountains with friends on a Sunday and it would be all Irish. I did my fáinne exam with Máirtín Ó Cadhain. He was a lovely man.”

During this time Marion was also becoming immersed in the Republican Movement and the activities that would shape her future life and political philosophy. 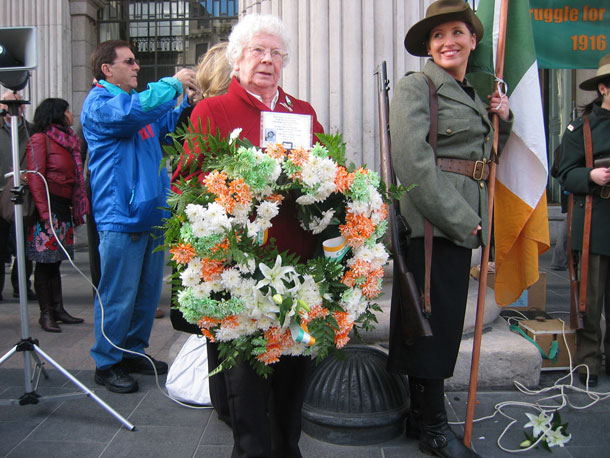 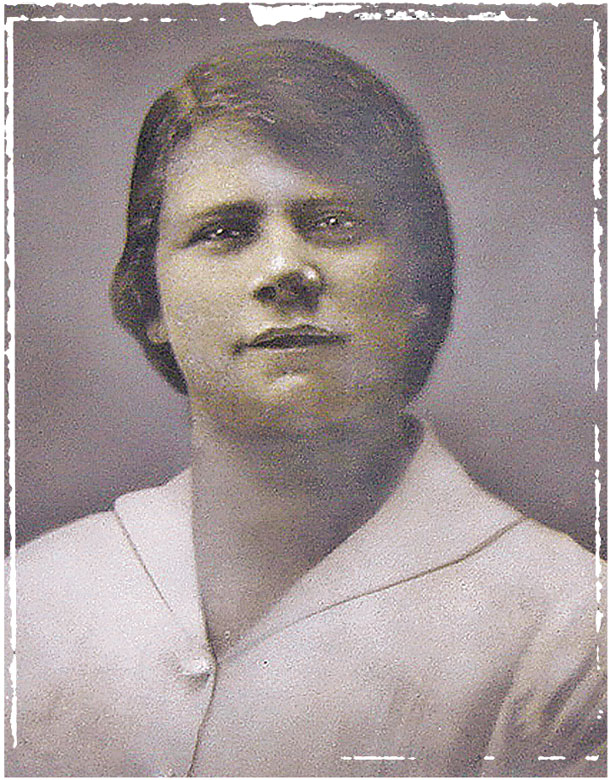 • Marion’s mother, Martha Kelly, was active in the Irish Citizen Army in the GPO

“When I was young, Clann na nGael was the first thing. They were the girl scouts. When we were in Clann you went to anything that was on – Irish on a Monday night, something else on a Thursday. That’s the way we were brought up. Some of my sisters were in Cailíní when they were young and you could go into Cumann na mBan afterwards but they didn’t. I was in Cumann na mBan. You didn’t do that much really because that was after the 1940s and it was banned. They brought out internment then.”

She explained to me what role Cumann na mBan played at that time.

“I was involved up to the time I was married really. We had a meeting every week. We used to do collections for the internees and then we used to get food parcels ready for them to send down, somebody went down every Saturday. And we’d have concerts and different things for them. We were very well supported locally.”

Marion met her husband, Leo Steenson, another dedicated republican, at a public meeting. A Belfast man, Leo was involved in the IRA campaign of the 1950s and eventually settled in Dublin, where he met Marion through her brothers.

She talks about her husband and the effect the republican struggle had on the family.

“Leo was involved and when you have a family you had to look after them. There were no babysitters then. I had five children: four boys and a girl. That changed the whole thing. I didn’t know much [about Leo’s prominent role in the IRA]. It’s only when he died that some of the fellas would tell you how he was involved.

“I still went to anything I could. We used to go up with Cumann Carad, to Joe Cahill’s father. They had a little shop on the Falls Road and [Leo] used to go up on a Saturday morning and have breakfast there.

“My youngest brother was in Belfast in the ‘56 campaign. He was last to be released and another one was interned here. After all that Mammy done and they were jailing us, the Special Branch gave her an awful time.” 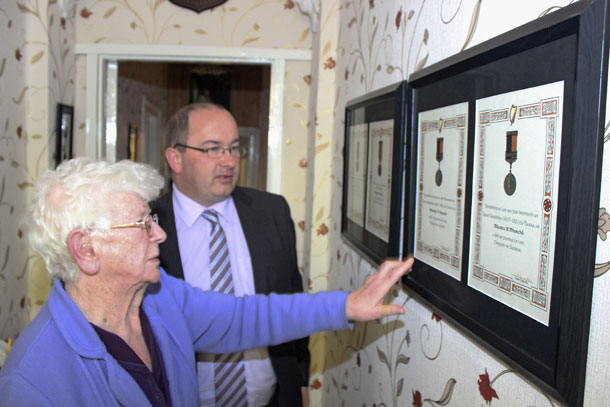 State forces were a constant shadow over the Steenson household also, but Marion recalls with great humour that she and her family always got the better of them.

“They raided the house regular alright. I was in hospital with the second one, Pádraic, and a sister of mine was here and they came to raid. It was a false alarm but they shovelled all the coal out of the back. There was nothing there and when they wanted her to put it back she wouldn’t and they were looking for soap to wash their hands she wouldn’t give it, saying: ‘I didn’t send for you and ask you to do that.’”

The house was always a safe haven for republicans and they would outfox the authorities in helping out comrades in need throughout the 1950s, 1960s and 1970s.

I ask Marion what she thinks of the current crop of Sinn Féin representatives and the move away from the armed struggle towards democratic politics.

“You are better in it trying to do something than outside. I must say I like Mary Lou McDonald a lot. She speaks very well.”

The Cumann na mBan veteran still aspires to a united Ireland but isn’t sure that the unionist rump will ever be ready to agree to equality.

“And while we have that [Fine Gael/Labour] Government we still have the element of the Blueshirts about the place. Enda Kenny says we’re closer to Britain now than we ever were. And sure they have given everything away. Look at the ESB, the fishing, the farmers, the turf. I think they’ve sold us out, to be honest with you.

“I asked [Labour Party minister and local TD] Joe Costello the other day, how could the Labour Party go with the conservative party, Fine Gael. Two different policies. Do you know what he said to me? That Clann na Poblachta went with Fianna Fáil.

“Another thing I go mad about is Seán Kelly. He brought the GAA down. And he walked out and joined Fine Gael – two different policies. And there”s another thing with Cumann Lúthchleas Gael, they seem to have lost an awful lot. They never use ‘Cumann Lúthchleas Gael’. And the way they stand for Amhrán na bhFiann, they’re a disgrace. I mean, whoever taught them to stand with their arms around each other?” 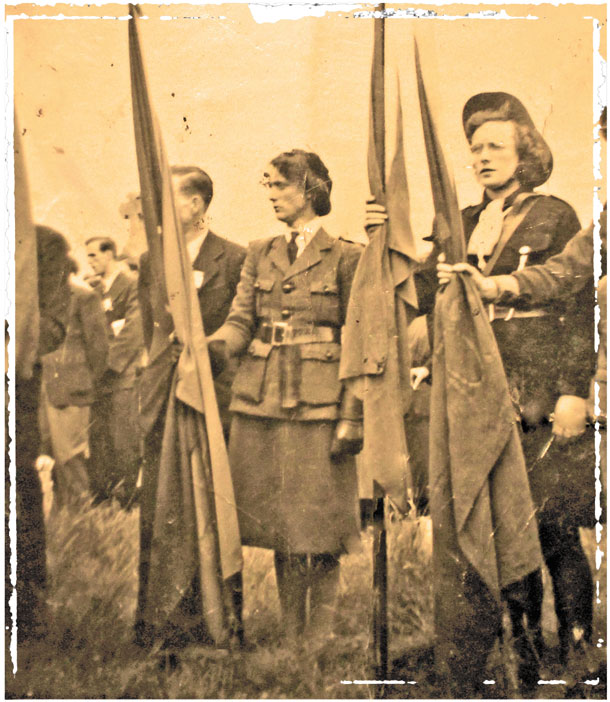 Croke Park was also the catalyst for a former Taoiseach being reprimanded by Marion.

“Bertie Ahern was going around here for the election at the time the English queen was coming or the rugby match with England was on. He shook my hand and I said I’m going to watch you tomorrow to see if you’re going to stand for God Save the Queen and he said to me, ‘Well what do you want me to do?’

“I said ‘I don’t care what you do’ but I showed him that photograph of Bloody Sunday in Croke Park and said ‘Croke Park wasn’t built for that.’”

The influence of Marion’s mother is ever-present, even as she explains why she still fights against unfair policies being imposed by this Fine Gael/Labour Government.

“She was an amazing woman. She was only 17 and that’s why you’ll be coming to see me in jail. I wouldn’t pay my Property Tax. So I got a letter a month ago saying I had to have it paid by March, and all the things they can do. They can dock it out of my pension and I’m waiting to see if they do because they have no right to – it’s illegal. I’m still battling.”