Battle lines being drawn by loyalists for May elections

It will be interesting to see who blinks first

As Gaeilgeoirí arrived in family groups, or in knots of teenagers out for a bit of craic, unionist flag protesters who had gathered outside Belfast’s civic building hurled abuse at them.

The unionists at one point tried to storm the building but were thwarted by security guards.

An Irish News photographer was followed by ‘fleggers’ and assaulted on Royal Avenue.

Clearly these thugs came to the front of the City Hall in an attempt to frighten and intimidate nationalists celebrating their culture.

The irony (that the ‘flag protesters’ purporting to defend their culture find expression in assaults on Irish-language enthusiasts) will be lost on these bullies.

But this dichotomy goes to the heart of unionist politics. Indeed, it is the unionist dilemma.

It was summed up very crudely in an interview that the leader of the UVF-aligned Progressive Unionist Party, Billy Hutchinson, gave to the unionist News Letter daily newspaper on Wednesday 19 March.

Hutchinson has served a life sentence for the 1974 killing of two Catholics, Edward Morgan and Michael Loughran. He told the unionist daily that his actions helped prevent a united Ireland. He implied that the two building workers were in the IRA.

The PUP leader said he had “no regrets in terms of my past because I contributed to preventing a united Ireland”. 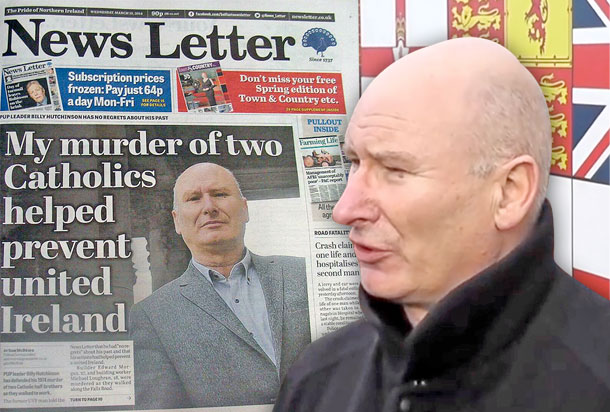 It hasn’t gone unnoticed that on the day Hutchinson was drumming up political support for his party it was being reported that a senior UVF figure from east Belfast, David McConnell, was convicted at Belfast Crown Court of possessing drugs with intent to supply. The conviction was related to a PSNI raid on a drugs factory in east Belfast. The senior loyalist had a previous drugs conviction dating back to 2000.

East Belfast Ulster Unionist MLA Michael Copeland was one of a number of people who wrote a reference for McConnell. Copeland was at the centre of controversy last month when he signed McConnell into Stormont for a private meeting.

Needless to say, this laissez faire attitude that unionist politicians adopt when it comes to the activities of loyalist paramilitaries has permeated the unionist street politics of the past 16 months or so, since the decision by Belfast City Council to reduce the flying of the British flag on City Hall.

The PUP has, by and large, become the mouthpiece for the ‘fleggers’ while in the background the UVF has been supplying the muscle. The dogs in the street, as Martin McGuinness has said on many occasions, know this yet senior figures in both the main unionist parties ignore the violent reality of the so-called flag protests and stand with them or justify their thuggery.

This ‘pan-unionist coalition’ has solidified around the laughably named Twaddell Civil Rights Camp.

This was set up just yards from the Ardoyne interface in the days after the rioting that erupted when the PSNI blocked last year’s Twelfth passing through Ardoyne. 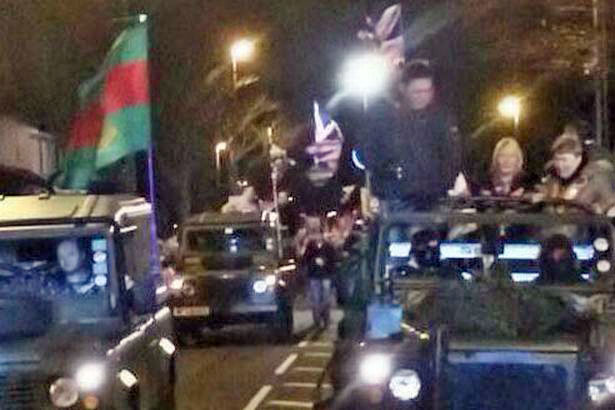 Since last July, nightly protests have been held as well as marches.

And on top of the cost of policing these protests (said to be £50,000 a day) there is the underlying sectarian intimidation and disruption as the area is sealed off.

Ardoyne residents have reported many instances of sectarian abuse directed at them from the camp.

An Phoblacht has been told by reliable sources that unionist residents from the Woodvale and Twadell area have dubbed it ‘Camp Poison’, given the negativity associated with it.

Masked loyalists drove military vehicles up to police lines as part of their nightly protest on Tuesday 18 March. Members of the crowd were heard chanting and encouraging the drivers to ram the PSNI lines.

This support sees them share platforms with members of the UDA and UVF as well as senior Orange Order figures who call for the protest to be “upscaled”.

It will be interesting to see who blinks first in the High Noon stand-off as the DUP and PUP fight for the loyalist vote in the May elections.

The Twaddell coalition will count for nothing then.