An Irish Republic worthy of the name 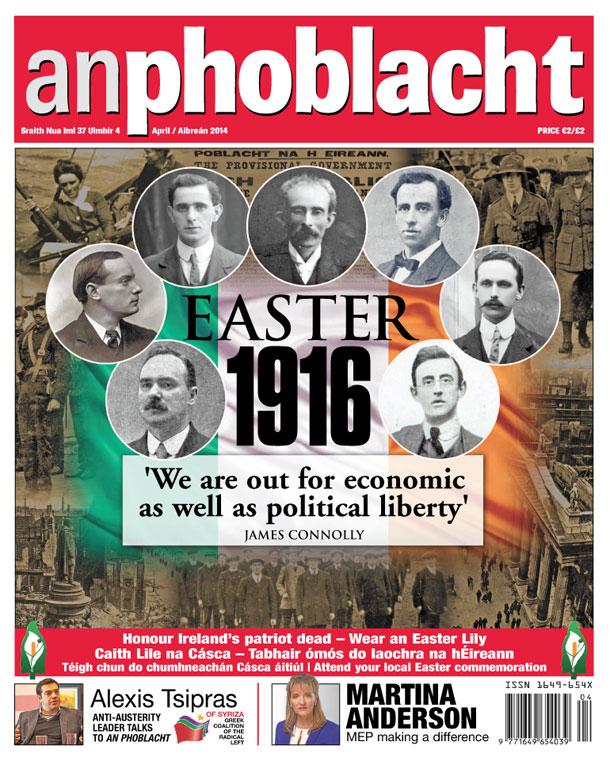 Politics is not a spectator sport for those who want to change society. Let’s go out and make that change.

EASTER will see thousands of Irish republicans once again honour the memory of all those who gave their lives for Irish freedom by rededicating themselves to the continuing struggle for national, social and economic freedom.

Our objective is still an Irish Republic worthy of the name, the ideals and the sacrifice encapsulated in the Proclamation read by Pádraig Mac Piarais at the GPO in Dublin in Easter Week 1916.

Sinn Féin has the will and the vision to make real changes in society.

The Proclamation of the heroes of the Easter Rising declared:

“The Republic guarantees religious and civil liberty, equal rights and equal opportunities of all its citizens, and declares its resolve to pursue the happiness and prosperity of the whole nation and of all its parts, cherishing all the children of the nation equally, and oblivious of the differences carefully fostered by an alien government, which have divided a minority in the past.”

Sinn Féin remains committed to making the basic tenets of the Easter Proclamation a reality, unlike the leaderships of Fianna Fáil, Fine Gael and Labour who pay lip service while prosecuting policies of austerity on the many while they govern and wheel and deal in the interests of the few.

Partition and Tory ideology at Westminster blights the development of Ireland and impedes the development of an all-Ireland republic. Even the Alliance Party’s European elections candidate has said in the past fortnight that a united Ireland would be “better placed economically, socially and politically”.

And the conservative consensus that epitomises the leaderships of Fine Gael, Labour and Fianna Fáil is not one that reflects the aspirations of the men and women of 1916 nor serves the people of Ireland today.

Sinn Féin are the inheritors of a proud tradition, a tradition of resistance and rebellion.

While the methods and means may change, our goals remain the same.

The elections in May – where every voter in Ireland, North and South, has the chance to vote Sinn Féin – offers republicans an opportunity to significantly advance the cause of an Irish Republic.

Elections have always provided a platform for advancing the republican cause. In the 1918 general election, Sinn Féin swept to success; the 1981 H-Block elections saw the election of protesting prisoners Bobby Sands MP, Kieran Doherty TD and Paddy Agnew TD; there followed the elections that saw Gerry Adams voted in as MP for West Belfast; Caoimhghín Ó Caoláin in 1997 become the first Sinn Féin TD elected since 1957 and laid the foundations that saw 14 Sinn Féin TDs elected in 2011; and there have been the successive local council, Assembly and Westminster poll battles that saw Sinn Féin rise to become the largest nationalist party in the North.

Now republicans have the chance to follow in all these footsteps by delivering the best Sinn Féin election performance possible.

Politics is not a spectator sport for those who want to change society. Let’s go out and make that change.