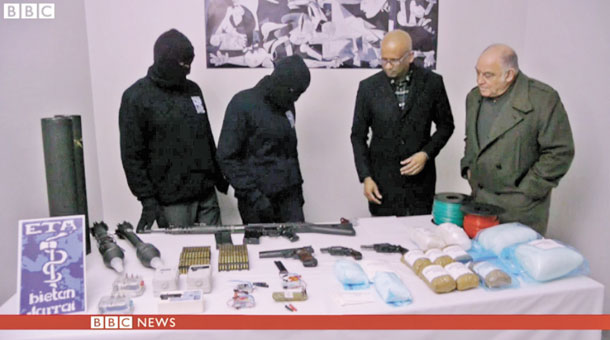 On 21 February, the BBC received exclusive video footage, recorded by ETA at a secret location, of two masked ETA members displaying a small part of the group’s weapons arsenal.

FILM of the Basque separatist military organisation ETA putting a cache of weapons and explosives “beyond operational use” in January in a symbolic gesture reaffirming ETA’s commitment to the Basque peace process was released on 21 February by members of the Amsterdam-based International Verification Commission.

Gerry Adams (one of a number of Sinn Féin figures who has been proactive in trying to build the peace process in the Basque Country over many years) immediately hailed the move as “a very significant step forward”.

He urged the Spanish Government to respond in a positive way and he called for the release of jailed Basque leader Arnaldo Otegi and more than 600 political prisoners.

“These and other related measures would make a real difference in strengthening the peace process and facilitate progress toward demilitarisation and national reconciliation,” the Sinn Féin leader said.

He reiterated the need for the Spanish authorities to engage in dialogue, something Madrid has steadfastly refused to do.

“The key that unlocked the peace process here in Ireland was talking,” Gerry Adams said. “I would like to think that the Spanish Government, despite the challenges, would embrace talking as the way forward.” 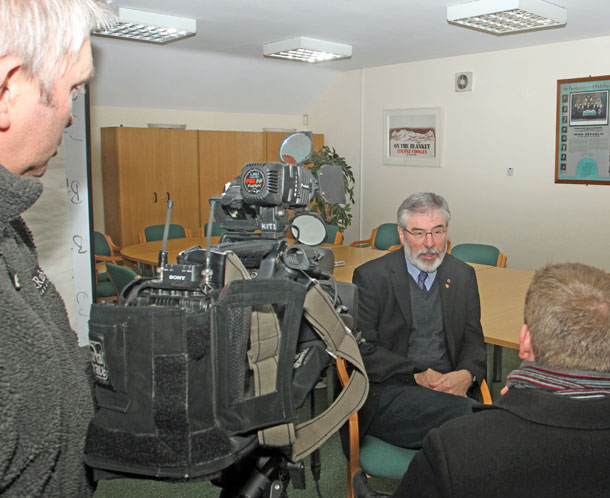 ETA (Euskadi Ta Askatasuna, or “Basque Homeland and Freedom”), declared an end to its armed campaign in 2011 but the Spanish state, rather than engage in the peace process with political representatives, has pursued a policy of repression against Basque civic society and political prisoners even though more than 100,000 people marched in Bilbao in January in support of the political prisoners.

On 21 February, the BBC received exclusive video footage, recorded by ETA at a secret location, of two masked ETA members displaying a small part of the group’s weapons arsenal.

The decommissioning monitors said the small amount of arms and explosives involved was the result of constraints caused by operating “in clandestine conditions”.

Commission members were later questioned by an investigating judge in Madrid. They told him they did not know the identity of the ETA members they met nor where their weapons were kept. 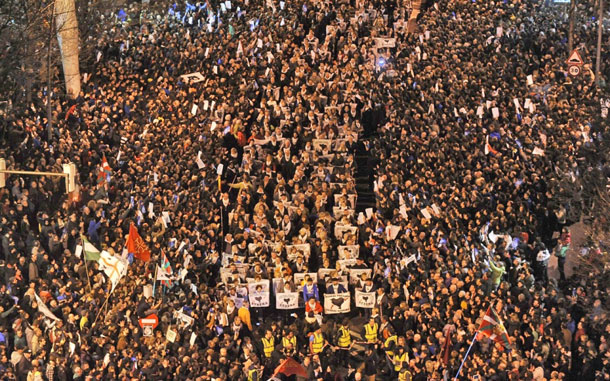 • Over 100,000 people march in Bilbao in January in support of Basque political prisoners

Commending the work of the International Verification Commission, Gerry Adams said of the move by ETA:

“This is a good news story for the Basque Peace Process which has sought to match the success of the Irish Peace Process.

“Since before the Good Friday Agreement in 1998, Sinn Féin has been involved in assisting the building of a peace process in the Basque country. The Irish Peace Process is seen by many as a model, an example, of what can be achieved if there is political will.

“There is overwhelming support within Basque society for a resolution of the conflict.

“There is an onus on the Spanish and French governments to respond positively to the announcement by the Verification Committee.

“Peace processes need constant attention and encouragement, and the active and positive participation of all sides. The Spanish and French governments have a key role to play in promoting a process of dialogue that can advance the goal of a just and lasting peace in the Basque Country. That means responding in a positive way.

“Confidence building measures (which were an important part of the Irish Peace Process) can assist in this. In this context, the release of Arnaldo Otegi, Secretary General of SORTU , would be an important step.

“The Spanish and French governments should also end the policy of dispersion, an arbitrary measure applied to Basque prisoners, and transfer prisoners to prisons closer to their families. Seriously-ill prisoners who need treatment should also be released under existing legislation.

“These and other related measures would make a real difference in strengthening the peace process and facilitate progress toward demilitarisation and national reconciliation.”