People power against the pushers

The Concerned Parents Against Drugs movement, 1984 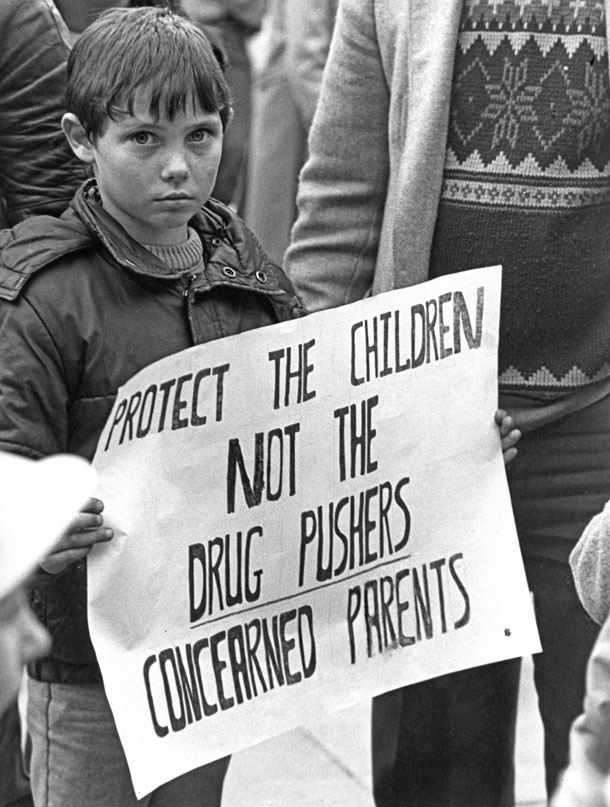 A sensationalist tabloid media was, as ever, the willing tool of an embarrassed Establishment trying to deflect attention from its criminal neglect and abandonment of entire communities where the unemployment rate was tipping 60%.

1984 saw the ‘official’ formation of the Concerned Parents Against Drugs — a campaign that spontaneously erupted in working-class areas across Dublin as a response to the heroin dealers who were crucifying their communities and killing their families.

Drugs dealers ruled the roost in working-class Dublin. The misery they piled upon addicts and their families and friends seemed to be of little concern to the state — including the Labour/Fine Gael Government and the Garda — so long as it was contained in working-class communities.

The roots of the CPAD can be traced back to Hardwicke Street Flats, not far from the Garden of Remembrance at Parnell Square and O’Connell Street.

Writing in An Phoblacht/ Republican News in March 1984, our reporter Siobhán O’Malley said that “scarcely a household was not affected in some way by the drug problem and the related wave of petty crime”.

The identities and activities of the drugs dealers were known to practically everyone in the close-knit communities — and to the authorities too. People were, literally, dying in front of their eyes. Human beings were suffering slow, painful, awful, agonising deaths less than a mile from tourists snapping photos of the GPO, where the 1916 Proclamation pledged to “cherish all the children of the nation equally”. But the Government and the police force that inherited that mantle did not cherish the children of the nation equally. 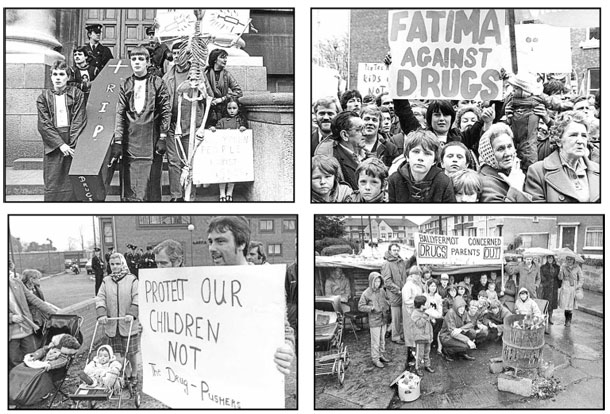 Dublin Corporation was pleaded with to evict the pushers. Addicts were ‘shooting up’ in the stairwells, leaving pools of vomit and discarded syringes on the stairs used by everyone, including young children. The Department of Health was begged for treatment services for addicts. The police were called on to move against the open dealing on the streets and the major crime gangs dealing in death. The appeals were met with excuses or piecemeal responses. There were even outright denials there was actually a significant problem.

People living in the shadow of the drug dealers knew different.

In 1982, a delegation from Hardwicke Street Flats Tenants’ Association went to the door of a well-known pusher in the flats and called on him to leave. The drugs dealer ignored them. A tenants’ public meeting attracted 300 people. The pusher finally took notice and left. It became a model for the Concerned Parents Against Drugs. Groups mushroomed across the city and county, each adapting their tactics to their own particular environment.

It was a movement noticeable by the fact that women were the initial driving force. 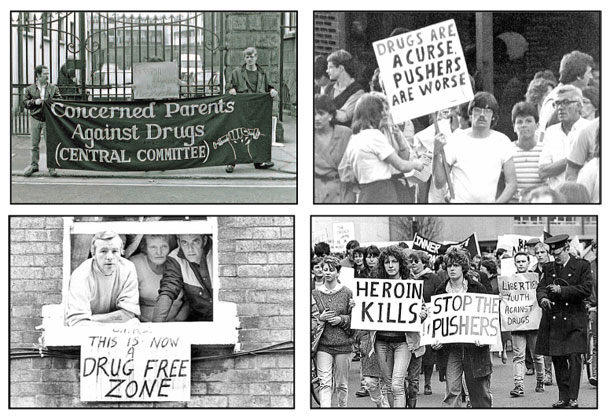 Existing groups offered advice and solidarity in a fraught atmosphere. Drug dealers not only threatened anti-drugs activists but actually attacked them, some were stabbed and even shot.

Sinn Féin activists living in the neighbourhoods blighted by drugs were to the forefront of the CPAD, but so were members of other political parties. While rank-and-file members of Labour, Fine Gael and Fianna Fáil also stood with their communities, their leaders and the viciously anti-republican Workers’ Party tried to undermine the street movement by portraying it as being a front for or directed by Sinn Féin and the IRA.

A sensationalist tabloid media was, as ever, the willing tool of an embarrassed Establishment trying to deflect attention from its criminal neglect and abandonment of entire communities where the unemployment rate was tipping 60%.

A Sinn Féin spokesperson responded at the time:

“The Garda and some politicians are so frightened that people in these areas are organising themselves that they claim they are being manipulated.

“They can’t conceive that ordinary working-class people can organise themselves.” 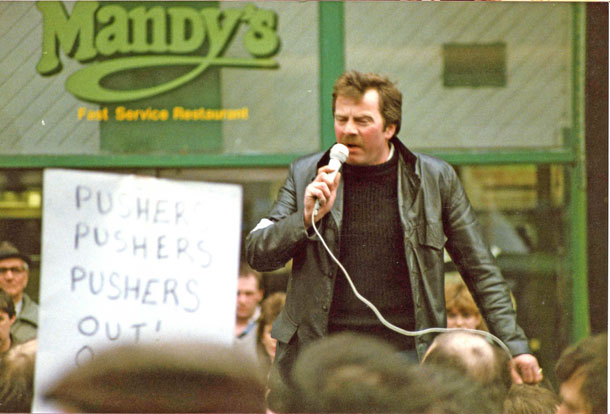 A S A MILKMAN, Kevin Fitzpatrick on his daily delivery rounds saw the devastation wrought by heroin. Every morning, he heard from his hundreds of customers about how their lives were becoming a living hell.

“Mothers were spilling their hearts out to me about what was happening to their kids,” Kevin tells An Phoblacht at his home in Sallynoggin, on Dublin’s, southside. He was born and reared here and still delivers milk around the neighbourhood.

Back in late 1983 and early 1984, Kevin used to allow two young lads to help him on his rounds in the Dún Laoghaire suburb rather than have them ‘scutting’ on the back of his milk float. Both fell victim to the drugs pushers. One was found dead with a needle in his arm; three weeks later, the other was found near a Halloween bonfire.

Kevin went to the dealers and told them he would go to the Guards with their names if they didn’t stop. They threatened him. The Garda still didn’t want to know, he says.

Soon after that, a meeting was called in the Top Hat ballroom in Dún Laoghaire and “800 or 900 people” turned up, Kevin recalls. A well-known and popular figure from having delivered milk in the area for more than a decade, Kevin was elected chairperson of the local anti-drugs movement. They asked the Concerned Parents Against Drugs in Dublin’s north and south inner city for support.

“They said they’d come out to my house the next Thursday night for a meeting,” Kevin told Nell McCafferty in The Irish Times in July 1984.

“I opened the door that evening and the garden was packed with them. The street was lined with their cars and vans. They spilled over into other people’s gardens. There was about a hundred of them, all come out from Dublin with placards and everything to help.”

It was 4 July, Independence Day in the USA; there was a sort of declaration of independence in Dún Laoghaire too.

The CPAD supporters from Dublin City and local families marched through the district. They stopped in the streets near where drugs dealers lived to announce through loudhailers that they were taking a stand.

“It was people power,” Kevin Fitzpatrick says with a pride that still burns today, 30 years later.

The next day, as he collected the milk money from his customers, the groundswell of support grew.

“Parents whose kids were on drugs were watching them die in front of their eyes,” he says. “And they couldn’t leave purses or jewellery down because their own kids would steal the money meant for groceries or bills to pay for their next fix. We’d get 20 calls a day from people like that.

“People were desperate – families and addicts.” 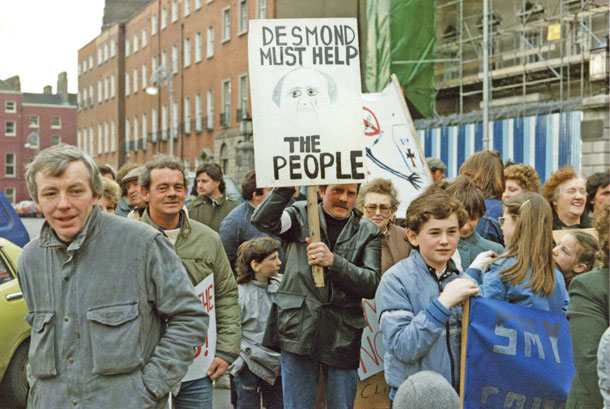 The CPAD marches grew and open-air meetings were held from the backs of flat-bed trucks and lorries.

People also went every Saturday morning to the constituency office of local Labour Party TD and Minister for Health Barry Desmond to lobby for action. They were met every week by ranks of 20 to 30 gardaí blocking the road and surrounding Desmond’s office. The Government minister wouldn’t meet Kevin Fitzpatrick because he was a member of Sinn Féin. “So I stood aside and our local CPAD Secretary Marian O’Neill went in to see him,” Kevin says, “He still did next to nothing.”

Kevin’s disgust at the minister’s attitude burns through, even after all these years.

“We were talking about kids’ lives, young ones lying in the streets with needles hanging out of their arms. Barry Desmond said it was because he was a Labour minister. It wasn’t. We went to Barry Desmond because he was Minister for Health – who else would you go to? If Gerry Adams was Minister for Health I would have gone to his door too to ask him what was he doing.”

The very visible and noisy CPAD marches captured the headlines and TV news. “Thousands of ordinary people marching across Dublin — you’d never seen anything like it in your life outside of the H-Blocks marches,” Kevin says proudly. 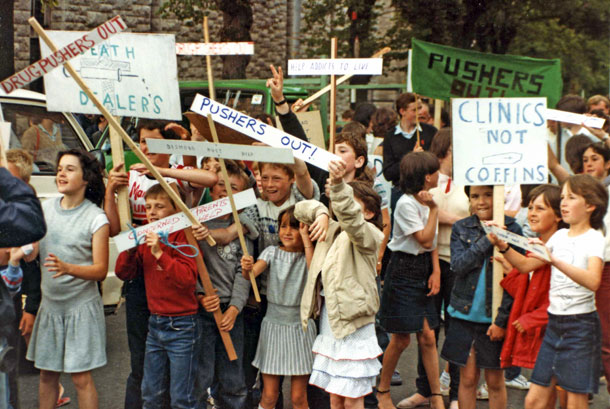 Even a visiting New York Police Department anti-narcotics officer went on one of the marches with the Dún Laoghaire CPAD for the experience. “He sent me a good luck telegram afterwards,” Kevin says.

The RTÉ flagship current affairs programme Today Tonight (a forerunner of Prime Time) came out to the Boylan Community Centre to do a ‘special’ where Establishment figures defended their records. Kevin recalls that he didn’t get into the hall for the programme, being screened after the Nine O’Clock News. “I was arrested by the Garda Special Branch at 6:15pm and held until 9:45 to stop me getting there.”

Kevin did a nine-month drugs education course in nearby Ballybrack and he says while the street marches and vigils at notorious drug-dealing spots are what most people associate with the CPAD, there was a lot of work away from the spotlight in helping addicts access treatment.

“It was never about targeting addicts, it was about targeting the dealers,” Kevin emphasises, showing me a photograph of a teenager carrying a CPAD placard with the slogan “Clinics not coffins”.

He points to the Health Service Executive drugs treatment centre that now exists at Monkstown Farm as being a legacy of the CPAD and the local anti-drugs movement. “That came from the back of a truck and the marches,” Kevin says, “because of the people who stood up to be counted, not because of any politician.”

Does he have any regrets?

“We all make mistakes and so did the CPAD,” he says candidly. “But you have to remember that it was a people’s movement made of ordinary people who got up to a crisis every day. Their kids were dying on their doorsteps. It was a nightmare.”

One of his regrets is that the CPAD “had to adopt” a policy of not co-operating with the Garda.

“While Garda chiefs were telling us there wasn’t a problem, some gardaí on the ground were great. The Drugs Squad and the Special Branch, though, had their own agendas (like the Government) and used dealers and addicts for their own ends as informers and agents so we stopped trying to work with them because they were working against us.”

He thinks dealers are back “ruling the roost again – only today instead of riding pushbikes they’re driving around in top-of-the-range cars and 4x4s”.

Kevin Fitzpatrick was a member of Sinn Féin in 1984 and he still is today, but he doesn’t try to claim any special credit for the party. He pays tribute to all the activists and supporters, people of all parties and none.

“It was people power.”